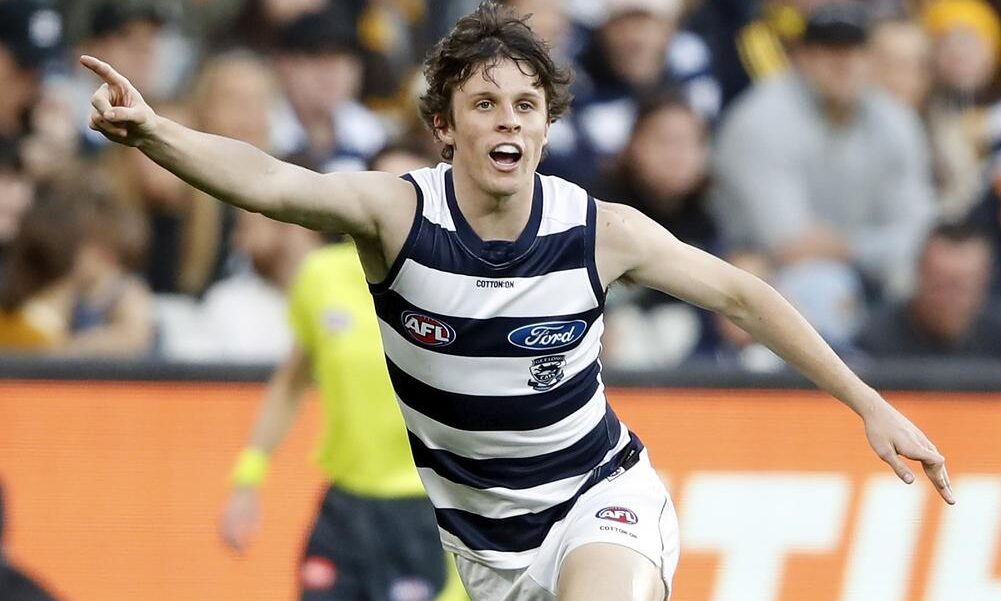 I have a look at six more players who are worth targeting in your Keeper League if your 2022 season is looking as bleak as a Melbourne winter’s day. It’s never to early to start planning for 2023!

It would be pretty easy for me to pick the ZOAT (Zach Guthrie) here but his stocks are well and truly on the rise after a really good month of footy. Holmes is one of the most exciting young prospects on the Cats’ list. The fact that they were happy to play a 19 year-old from Round 1 this year speaks volumes of his talent as we all know the Cats don’t exactly have a strong youth policy. Holmes’ pace and decision making has been an asset to the Cats this season and before he was struck down by injury he looked fantastic on the wing and even featured in the CBA’s in six of his seven games this year. While he may not hold forward status next year, he’s a huge candidate for a third-year breakout.

There is actually a plethora of talent on the Suns list and if guys like Hollands, Flanders or Sharp start getting a look at AFL level, they are worth looking at for the future but in the meantime it’s Connor Budarick who has quietly been going about his business at AFL level. Into his third year, Budarick missed most of 2021 after an ACL injury. I didn’t see Budarick playing this early in 2022 after his injury but obviously Connor and the Suns had other ideas! He’s evolved his game from a small, lockdown defender to an elite playmaker from the backline. Budarick was an elite junior Fantasy scorer and even averaged 76 for the Suns in the NEAFL as a 17 year old kid. His 4:1 kick to handball ratio is a Fantasy coach’s delight and the Suns seem to want the ball in his hands off half back. Grab him while you can as it won’t take long for the secret to get out!

I was keen on Bruhn at the start of the year and even I didn’t expect him to have popped as early as he has this year. In his second year, he’s put up three scores in the 70s and more impressively has been a part of the centre bounce mix in all of his seven games this season. This is in a side stacked with midfield depth and with talk of a salary cap squeeze at the Giants, it could mean one or two of their bigger name mids may be on the way out next season. This all bodes extremely well for Bruhn who has shown his love for the contest, a tackle and even a goal. If he continues to track this way, we could be looking at a Tom Green-esque third year.

I’m still very much ‘Team Max’ in the Lynch v Reeves battle. Poor Max has not had much luck with concussion, COVID and bee stings derailing his season. With an extended run in the side and a bit of luck, I’m confident he’s the Hawks number one man. Reeves may be a better tap ruckman but what Lynch can do around the ground supersedes the slight advantage Reeves has in the middle. Look at someone like Darcy Cameron this year, is he the greatest tap ruckman? No. But geez he has been a presence around the ground for the Pies. This is a similar kind of game that Lynch can play and to me, is a guy that gets the tick of approval from a guy like Sam Mitchell.

The Dees are a tough case as their elite players are all still young and are not going anywhere. James Jordan and Tom Sparrow are the two ‘up and comers’ of the Dees side but what I like about Jordan is that he looks like a natural inside mid who’s been stuck out on the wing in the last couple seasons but is still scoring pretty well. Usually a player who is in this situation and not playing in their best role can look a little lost but Jordan is having a fantastic year on the outside as his 72 average would suggest. I think he’s going to be a fantasy stud in the years to come and if an injury or two comes the Dees’ way – lookout for an immediate role change and scoring bump for JJ.

You could make a genuine case to not pick any Roos. Not a single player on their list is averaging more than 90 this season but I think JHF is a player who will keep improving. Playing in the worst side in the competition has meant his transition to AFL hasn’t been as smooth as someone like Nick Daicos and his scores have reflected that. While he’s only had one 80+ score, on the flip side he’s never scored below 50 which is a solid effort for a first year player. He has a lot of Patrick Dangerfield about him. The big body, the explosiveness, good goal sense. He just needs a bit more time, Potentially there are some coaches out there who were hoping for a faster start to his AFL career and would be willing to part ways with him. If they are, you should pounce.