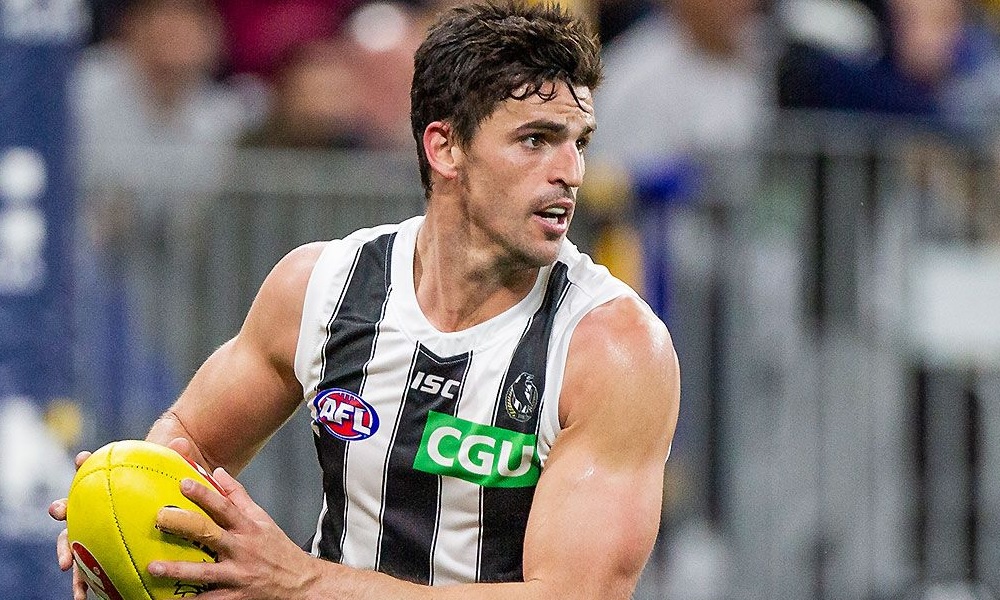 Analyse the CBAs from round 12 in our user-friendly table below – featuring advanced analytic tools to better measure the biggest changes, both seasonally and week-to-week – and check out my five risers and fallers to monitor in AFL Fantasy.

The CBA musical chairs for season 2021 continues at the Pies. Our ‘riser’ this week was the ‘faller’ just two weeks ago. In recent weeks, Scott Pendlebury found himself on a forward flank and out of the CBAs while carrying an injury, according to coach Nathan Buckley. A gift from the fantasy Gods, perhaps, the lack of mid-time was enough to make Pendles a forward DPP in the AFL Fantasy format. A move to the half-back line at the opening bounce in round 12 (in place of the managed fantasy superstar, Chris Mayne) was a welcome move for the 33-year-old, recording 10 disposals, 4 marks and 4 tackles for 55 first-half fantasy points. After half-time, an injury to Brayden Sier forced the Pies skipper back into the cole face – notching his first CBA since round 9 – and going on to attend 12/12 centre bounces in the second half. Who’s left with a seat in the CBA musical chairs next week is anyone’s guess, but with Mayne available to slot into defence, Pendles might have got the forward status just in time for his midfield revival.

There were some in the fantasy community (including myself) that had high hopes that fourth-year Docker, Adam Cerra would go gangbusters during his crucial “show me the money!” contract year. Alas, the second-worst pandemic of the 2020s, Sydnesmosis-69, derailed the contract year prophecy and foretold of a gloomy month on the sidelines. The 19-year-old has fought back since his return to produce three solid games – without recording the heavy CBA numbers that made his early-season form so mouth-watering. A return to the forward line for Michael Walters and a shoulder injury to captain Nat Fyfe in round 12 have seen Cerra’s inside midfield stonks back on the rise. A modest month of fantasy scoring could have some draft coaches eager to offload, meaning now could be the time to pounce on the ultra-talented young gun.

Injuries to centre bounce beasts, Treloar and Dunkley in recent weeks finally opened the door for midfield jet, Patrick Lipinski to breakou-… What’s that? He was omitted!? OK, finally opened the door for last year’s breakout inside midfielder, Bailey Smith to once again thrive on the insi-… He was back to a wing!? Hmmm… not Bevo enough… finally opened the door for All-Australian DEFENDER, Caleb Daniel to move inside??? BINGO!!! Bevo once again tricked us all into thinking he’d give us an easy CBA uptick to one of our promising young gun fantasy favourites. Instead, it was the Dogs reigning best and fairest half-back who got inserted into the centre bounce mix as an unlikely inside midfielder. Daniel only managed one clearance for the day but applied the second most pressure acts behind Tom Liberatore and managed a season-high six tackles.

The return of the GOAT, Paddy Dow (18 CBAs; 64% attendance) pushed the elder Curnow brother back to an outside role – ringing alarm bells for owners. If Training Wheels Teague opts to continue to roll with Dow, Will Setterfield, or even Zac Williams (at some point) for the remainder of the season, expect Curnow’s downward CBA trend to continue as the Blues yet again hit panic stations. With an average of 95 sitting next to the 31-year-old’s name ahead of the round 13 bye, now may be your final chance to sell before any remaining value disintegrates. Alternatively, if we assume the Baggers are in for a huge shake-up, buy-low opportunities for all the other potential drastic magnet-shifting midfield options – those mentioned above, plus possibly Jack Martin, Lachie Fogarty, or Liam Stocker – exists for a short window.

Andy McGrath has been a steady centre bounce attendee for the fresh and exciting Dons in their surprising rise up the ladder in 2021. Unfortunately, a PCL injury will see the former number one pick likely miss the remainder of the home and away season. McGrath’s midfield load (54.4% average attendance rate) in round 12 was distributed among Jake Stringer (+19% round diff) and Archie Perkins (+17% round diff) with the latter a quality long-term keeper league stash. The most tempting option from a fantasy perspective is the forward-eligible, Kyle Langford (22 CBAs; 64% attendance). Whilst the 24-year-old has had a healthy dose of CBAs since round 9, injuries to multiple key midfield members, now including McGrath, should ensure his sustained return to the engine room. Langford averaged 79.1 from rounds 1-8 while attending just 8% of centre bounces. Since then, he’s had a four-game average of 102.5 while boosting his CBAs up to a 69% attendance rate – nice.