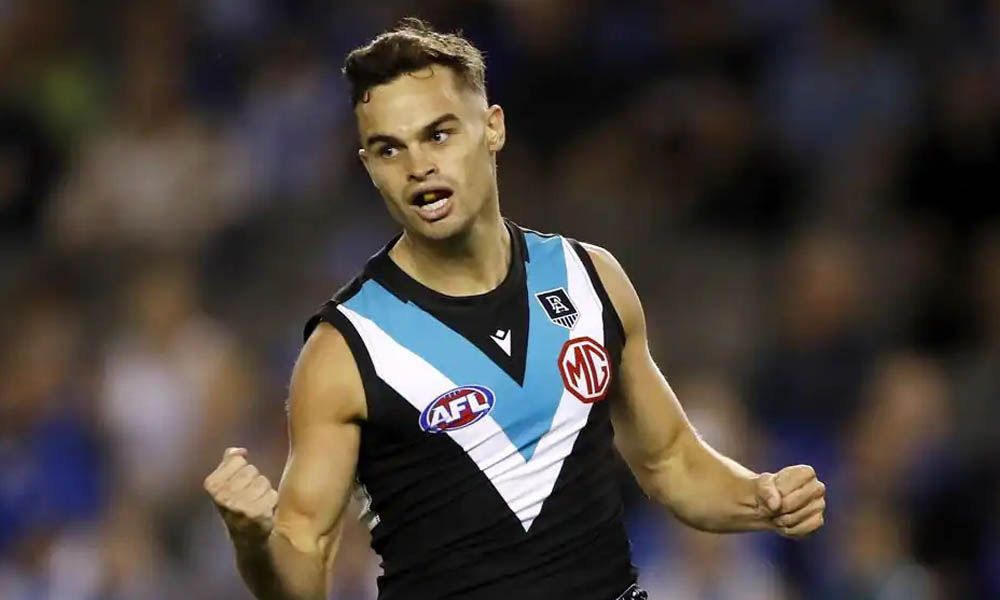 Analyze the CBAs from round 18 in our user-friendly table below – featuring advanced analytic tools to better measure the biggest changes to CBA numbers, both long term and week-to-week, and check out my risers and fallers to monitor in AFL Fantasy below.

Karl Amon (12 CBAs, 57% attendance) | 131 AFL Fantasy points
This guy is quickly becoming one of the most complete AFL Fantasy midfielders in the competition. Karl Amon attended 57% of Port Adelaide’s centre bounces on the weekend, which is +33.2% on his season average of 23.8%. Last week against Melbourne he only managed to attend 5% of centre bounces but still put up a score of 130 AFL Fantasy points. You might be thinking that CBAs are irrelevant for this guy, which is partly true, but it goes to show that Karl Amon is capable of putting up a good fantasy score no matter what role he is playing in Port Adelaide’s midfield.

George Hewett (21 CBAs, 72% attendance) | 95 AFL Fantasy points
Over the past three rounds, George Hewett has seen the biggest bump in CBA numbers out of any player in the AFL. In his past three games, Hewett has attended an average of 51.3% centre bounces for Sydney. After playing primarily in defence for the early parts of the season, he was injected into the midfield in round 15 and has seen a modest bump in fantasy scoring over his last three games. However, it’s hard to tell how secure this role is long term for Hewett. We’ve seen players like Chad Warner and James Rowbottom played in this role earlier in the season, and who know how it will play for the remainder of the season. But seeing as Hewett is listed as a defender, he’s one to keep an eye on.

Zac Fisher (11 CBAs, 44% attendance) | 63 AFL Fantasy points
Fisher returned to Carlton’s senior side this week after injuries hampered him for the past few months. Fisher had not attended a centre bounce for Carlton since round 1 but had a season-high number of 11 CBAs (44% of total CBAs) in the Blues’ match against Collingwood. Whilst he only scored 63 points in this performance, it was encouraging to see him in the centre bounce mix. It also seemed that he was used at the centre bounces when Carlton started getting the upper hand on the game. This should hold him in good stead for the future and I think he can only build from this point onwards. Watch him closely.

Steele Sidebottom (0 CBAs; -7% CBA diff) | 69 AFL Fantasy points
I am a little concerned about Steele Sidebottom’s decline in CBAs over the past few weeks. He didn’t attend a single centre bounce on Sunday against Carlton, and his fantasy score reflected that. Over the past three weeks, he has seen his CBA numbers drop by 24.7% on his season average of 31.7%. As a result, his last three game average is a measly 63, which is low for a player of his calibre. However, Callum Brown (who has been getting an increased run in the midfield over the last two rounds) has now been ruled out with a shoulder injury, so he could see an increase in his CBA numbers and fantasy scoring.

James Jordon (2 CBAs; -18% Last Round vs Avg. diff) | 69 AFL Fantasy points
We have noticed a decline in James Jordon’s CBAs over the past few weeks. From round 1 to 10, Jordon attended 34.4% of Melbourne’s centre bounces. Since then, he has only attended 8.8% of centre bounces but this isn’t necessarily a bad thing for Jordon owners. Melbourne’s only debutant for 2021 has been playing more time in defence over previous weeks and whilst his scoring has dipped, he could gain DPP for next season and I’m sure his owners would be happy with that.