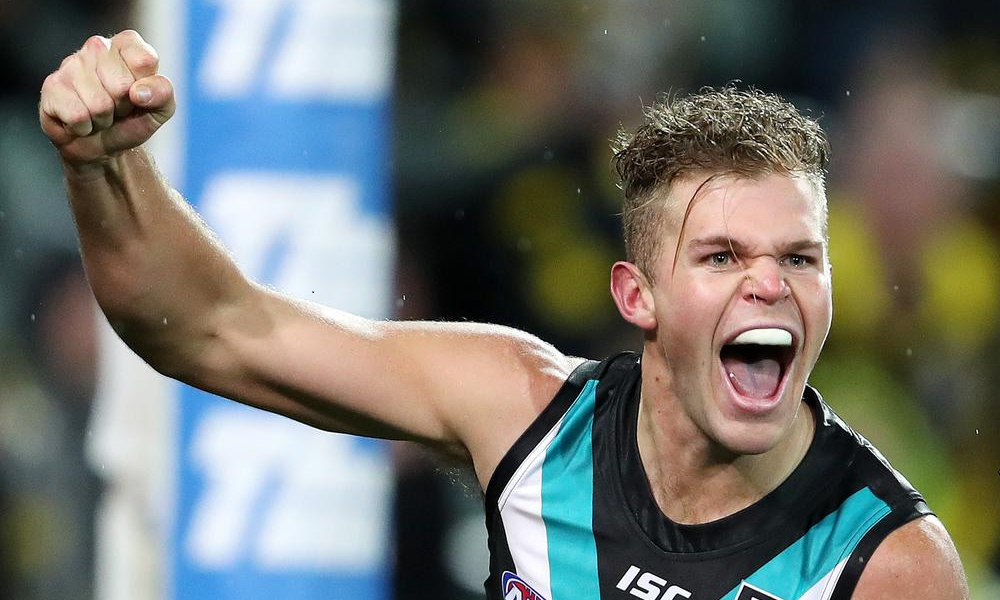 Analyse the CBAs from round 4 in the NEW LOOK user-friendly table below – featuring advanced analytic tools at your disposal to better measure the biggest changes, both seasonally and week-to-week – and check out my five risers and fallers to monitor in AFL Fantasy.

After a disappointing loss to West Coast in round 3, Ken looked to inject some pace into the engine room against the reigning premiers and he turned to last year’s pre-season midfield hype man, Houston. Injuries to Zak Butters (57% TOG) and Connor Rozzee (88% TOG – but limited to a Dr House forward role following a corky) no doubt aided Houston’s midfield momentum, but getting him involved appeared to be a clear change of tack. Aliir Aliir was the other notable winner from the move; Houston’s vacant kick-ins providing him with an additional +15 AFL Fantasy points, playing on from five of his six kick-ins according to Champion Data.

Ward was on the watchlist last week following the injuries to captain Stephen Coniglio and pesky tagger Matt de Boer. Whilst Ward increased his CBAs last week, it was unclear whether Leon Cameron would choose to prioritise the 31-year-old with arguably the best hair in the AFL over other star options at his disposal. Well, it’s clear that Cal should restock the hair gel for more camera time at CBAs going forward, after his sizzling 37-disposal, seven-clearance display against the Pies. Could we see Ward have a Travis Boak-esque late-career resurgence after a couple of seasons out of the centre bounce mix?

Lower on the centre bounce spectrum than the other two above, but nevertheless exciting for all forms of fantasy footy – especially keeper leagues. Currently rocking FWD/DEF status in all formats, Cox will likely be neither of those in 2022 fantasy. Starting his career as a supersized wingman, the ultra-talented 19-year-old is getting a taste of some ruck minutes in the absence of fellow Bombers young-gun, Sam Draper. Nik Cox could be the rare fantasy player that makes the swingman role sexy; with his size, skill set, and elite endurance allowing him to play all the juiciest fantasy roles – he might genuinely have the most upside of any young player in the AFL.

The Suns opted for a new look centre bounce unit against the Blues, removing Anderson (-47%) and Weller (-31%) from the centre bounce mix in favour of more Miller (+5%), Greenwood (+9%), Swallow (+17%) minutes, and the re-introduction of pacey, pressure players MacPherson (+48%) and Rankine (+24%). The Ark wasn’t affected by the move – collecting 30 disposals and an equal team-high 10 clearances – and seemingly roled into stoppages following the centre bounce as per usual. Dew has been one to mess around significantly with his centre bounce rotations in the past (pour one out for the OG GOAT, Fiorini), but keep a close eye on the peripheral attendees in case any juicy options (like MacPherson) retain their role.

Uh oh! Just when long-suffering Seb Ross owners felt a glimmer of hope with an early-season Ross resurgence – the scores took a dip, and now the inside mid time is gone. Perhaps it was inevitable with Brad Crouch arriving in town, but the recent plight of Gresham, the ongoing oldmanitis of Hannebery, and the lack of a Clark or Higgins role change – there was still some hope for Seb. Alas, he is not the hero of this tale; the winning formula in round 4 revolved around new recruit Crouch (+37%), resident butcher Zak Jones (+25%), and promising youngster Bytel (+59%).