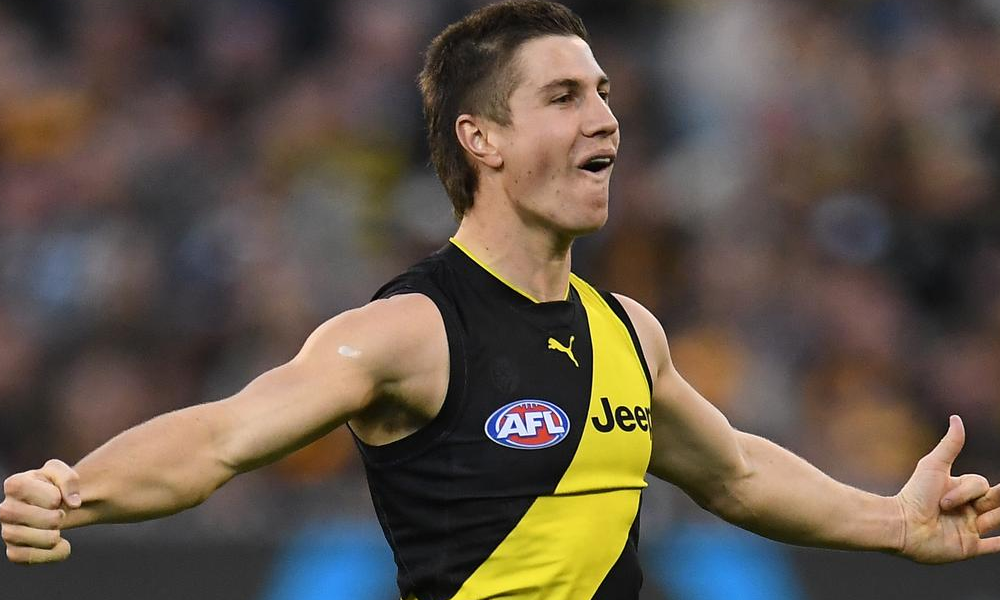 Analyse the CBAs from round 9 in our user-friendly table below – featuring advanced analytic tools to better measure the biggest changes, both seasonally and week-to-week – and check out my five risers and fallers to monitor in AFL Fantasy.

Rory Laird 2.0!? Baker surprised the fantasy footy world by showing some serious stat-stuffing behaviour with a midfield role change in round 9. The injury crisis at the Tigers created an opportunity for the 23-year-old, and he did his best Laird impression as a feisty, tackling, clearance machine – while racking up a ton of the pill against the GIANTS. Playing as a pure inside midfielder, Baker had 33 disposals, six tackles, seven clearances, nine inside-50s, and 529 metres gained on his way to 118 AFL Fantasy points! Perhaps most impressive was Baker’s “Observable Thirst” – a term describing the nature of: ‘A player who displays an insatiable desire for the pill, particularly when not in possession of the Sherrin; yearning for its touch with the thirst of one stranded in the Sahara’.

Since Dunkley’s shoulder injury, Bevo has teased us with a taste of Bazza CBAs – upping the dosage every week from round 6. Finally, Bevo gave patient owners what they’d hoped for on the weekend as Smith attended a season-high 58% of centre bounces against the Power. The sacrifice came from Treloar (-32% round diff), who played more of an outside-inside game, allowing Smith more time at the coal face. The 20-year-old did not disappoint, notching up 25 disposals, 11 contested possessions and nine clearances… but just a modest 79 AFL Fantasy points, thanks to his zero marks. If this role is here to stay – and it’s not just Bevo flicking around magnets for fun – then Bazlenka is going under the radar as a serious stock on the rise; Port is a tough opponent, and zero marks is an outlier. Buy-low while you can!

This lad is about to go ham for a solid few weeks in the absence of Scott Lycett. The 202cm forward-ruck took away the hyphen and deleted the former word to be the sole number one at centre bounces. With Brodie Grundy and Sean Darcy before the bye, it won’t be a walk in the park for Ladhams, but the 23-year-old should at least get a solid month at the helm; a juicy Cats matchup his reward following the bye in his likely sole ruck finale. Enjoy the ride while it lasts in whatever format is your bag, with perhaps a sell-high opportunity imminent in keeper leagues (let’s not forget that 21-year-old Sam Hayes is still waiting in the wings!) if you aren’t keen on Ladhams sharing the ruck load potentially throughout most of his career.

You have to feel for Cuningham. Since round 6, the 24-year-old has had a ton of CBAs (including a season-high 20 CBAs – 61% attendance – last week), providing the Blues with a different look on the inside alongside Cripps, Walsh and Curnow. Unfortunately, just as he began to find his feet as an inside midfielder, just two minutes into round 9 he suffered a season-ending ACL injury. Footy can be cruel. When Cuningham went down, Carlton turned to a few promising youngsters for answers. Liam Stocker (+38%) and Will Setterfield (+23%) were prominent at centre bounces, while former Cat, Lachie Fogarty (+8%) also worked his way to stoppages while predominantly playing high half-forward.

A favourite of both keeper coaches for his future potential and classic coaches for his cash generation, Berry has been a surprisingly prominent fixture for the Crows centre bounce mix in 2021. Has that dream run come to an end? Berry’s apparent versatility as a pressure forward may mean he finds himself out of the CBA mix as more one-trick midfield options stake their claim for inside time. The introduction of first-gamer Ronin O’Connor (+50%) – a fellow tackling beast and promising young Crow – and the reintegration of Rory Sloane (+41%) into the CBAs aided the decision to move Berry forward – and he looked pretty good! Kicking two goals and applying an equal team-high 18 pressure acts, Berry may find himself inside 50 more often.