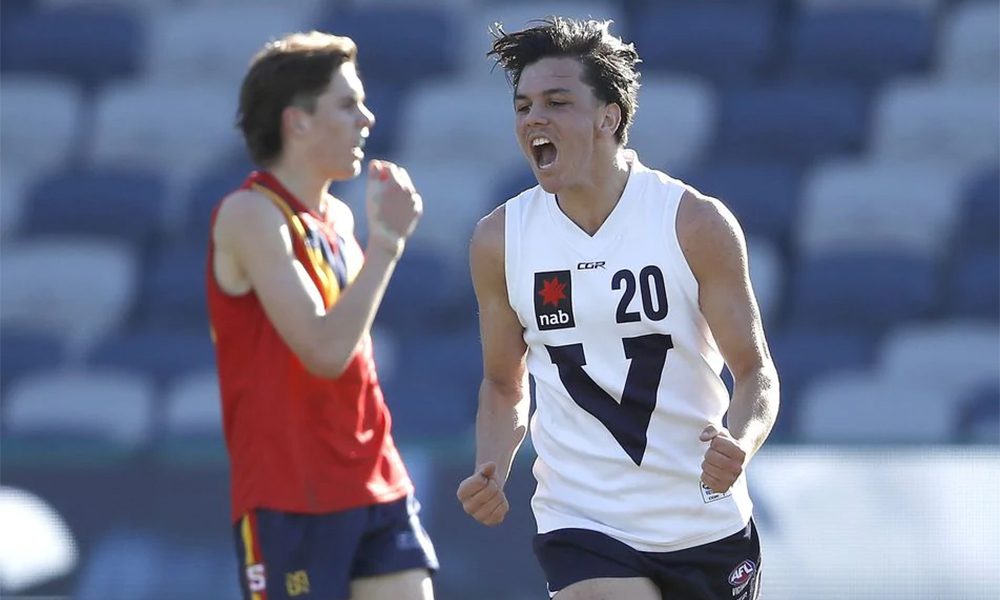 It’s time for another draftee fantasy analysis! In this article we’ll take a look at Elijah Hollands.

Like all the other Victorian kids, Elijah Hollands didn’t get a chance to strut his stuff this year. But that wasn’t just due to the COVID-19 pandemic. Unfortunately, Hollands injured his knee in a training accident earlier this year and would have missed the season after having a knee reconstruction.

Despite the injury, he still remains one of the top prospects and would have to be the highest rated midfielder who will start his AFL journey after being selected in the 2020 AFL Draft.

Hollands is a big-bodied forward/midfielder who is fast, strong, and has the ability to take big grabs.

He uses the ball cleanly, tackles hard but also has great goal sense. According to Aussie Rules Draft Central, his goal sense is arguably the best out of this year’s draft crop. His defensive work is also a highlight and he racks up good tackle numbers.

But how do his fantasy numbers stack up?

Firstly, we will start with his 2019 NAB League numbers. He played four games for the Murray Bushrangers in 2019 going at 11 kicks, 6 handballs, 6 marks, 4 tackles, and 1 goal per game. His AFL Fantasy average for this season was 82.8 points per game.

His best fantasy performance came in the season opener, where he had 90 AFL Fantasy points on the back of 12 kicks, 3 handballs, 10 marks, 3 tackles, and a goal.

Of the four games he played in 2019, his lowest score was 72 points. So this could indicate he has a high floor when it comes to fantasy scoring.

Elijah Hollands also had a run at the Under 18 Championships for Vic Country last year and was a clear standout.

He played all four games for Vic Country to average 67.2 AFL Fantasy points. Looking at his individual stat lines, he averaged 8 kicks, 6 handballs, 2 marks, and 6 tackles for the tournament. This is a good effort for a player who was a year younger than the top performers at the Under 18 Championships.

Elijah Hollands is the highest rated non-key position player, with Ugle-Hagan and McDonald tipped to go ahead of him. As we all know, key forwards take longer to progress and their fantasy game may not reach the heights of their midfield counterparts. With this in mind, Hollands could be one of the better fantasy scorers to come out of this year’s draft.

I personally think Hollands is a legitimate player to get excited about in AFL Fantasy and it will be interesting to see where he goes next month.