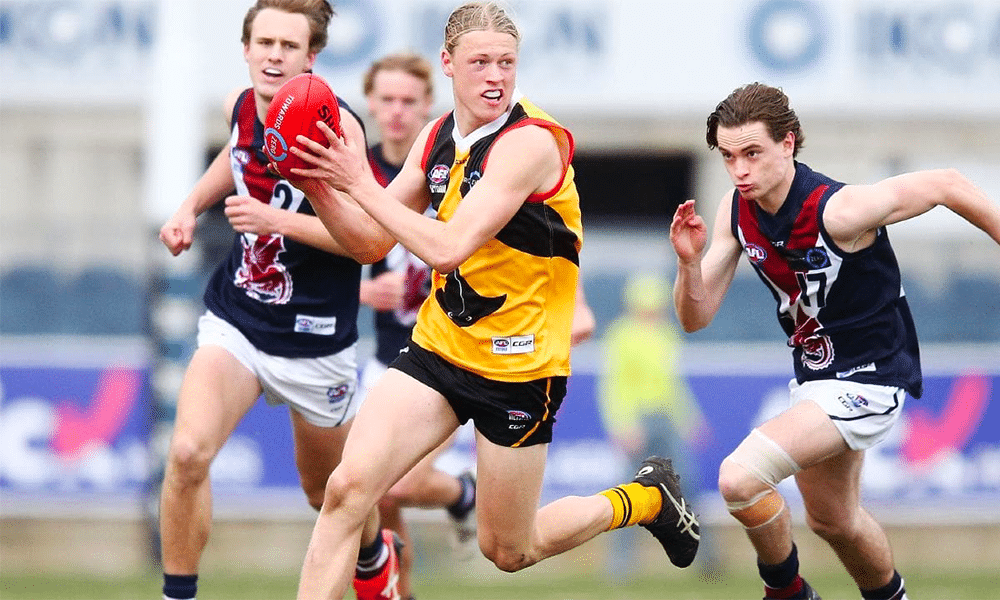 If you’re chasing a defender in your keeper league draft next season, then Hayden Young could be your man. He is a silky left-footer who uses the ball incredibly well. Young can take an intercept mark, play that sweeper role across half-back and also sneak forward to kick a goal. Let’s take a look at Hayden Young’s fantasy scores from 2019 and see how he performed in the NAB League and at the Under 18 Championships.

Looking to the Under 18 Championships, Young put up similar numbers across the competition as he did in the NAB League. At the championships, his top score was 100 AFL Fantasy points in the second round against Vic Metro. In addition, he averaged 22 disposals, 5 marks and 2 tackles playing across half-back in his other 4 games of the competition. These numbers work out to an average of 85 AFL Fantasy points per game at the Under 18 Championships.

In conclusion, Young is definitely a player you should keep your eye on if you need a defender. If you haven’t seen it already, then check out Young’s almost match-winning tackle and kick into the corridor in the Under 18 Championships Grand Final. This kick put Vic Country in front with two minutes to go. However, they were beaten by Western Australia in the end. This passage of play demonstrates the class of the kid, which should see him taken in the first round. Whilst Hayden Young’s fantasy scores aren’t the biggest of the draft crop, they are quite impressive for someone who played the majority of the year in defence. Hopefully he becomes the Xavier Duursma of the 2019 AFL Draft and sees plenty of action next season.