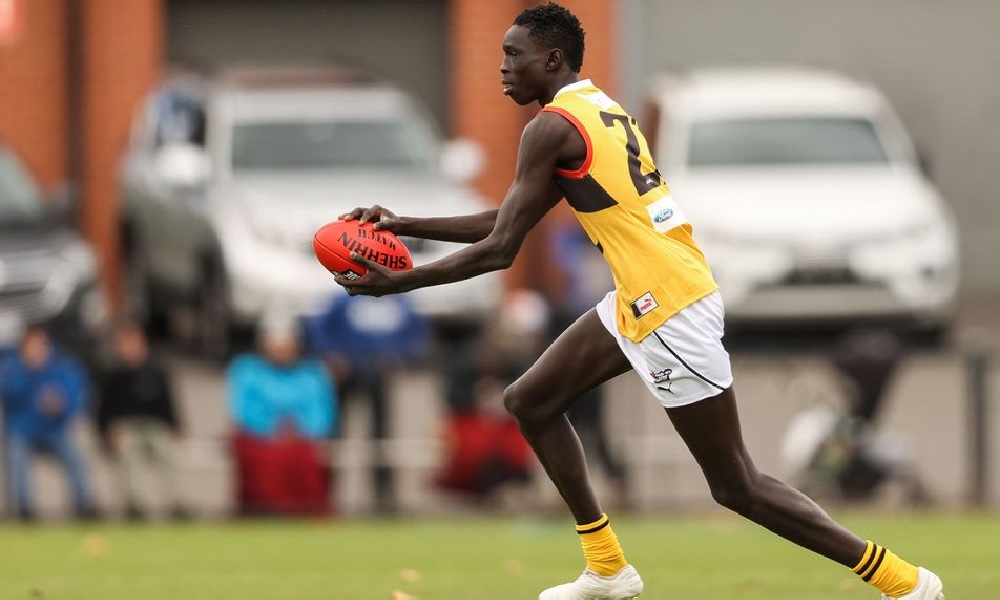 The last of our draftee fantasy analysis articles ahead of next week’s AFL Draft is the mouth-watering long-term keeper league prospect, Big Mac!

Mac Andrew, a Next Generation Academy (NGA) product for Melbourne, had a breakout season in the NAB league – skyrocketing up draft boards and all but ruining the Dees chances of drafting him in the process.

The 18-year-old – who claims to have piled on around 10 kg across the 2021 season – showed some incredible flashes playing as a forward-ruck in the NAB League. Notching double-digit disposals in every game bar one (where he copped an injury in the first 10 minutes), Andrew did everything but hit the scoreboard – kicking just two goals for the season.

If we cheekily disregard the 10-minute injury-affected game, his NAB League averages across five games read like this: 15 disposals (8 kicks), 15 hitouts, three marks, two tackles and a very nice 69 AFL Fantasy points. Notably, Andrew burst out the gates with 22 disposals, 11 hitouts, three marks, three tackles and an impressive 87 AFL Fantasy points in his first outing of 2021.

Andrew’s raw athleticism is incredibly freakish given his two-metre frame, but it’s not just the ruck craft big boy that’s exciting. His skill with ball in hand will have prospective teams frothing on draft night. It’s hard to point to too many ruckmen in the AFL right now that can kick the ball at full tilt without breaking stride. Recording eight or more kicks on three occasions in the NAB League, Andrew brings this to the table from day one; unafraid to unleash the peg in a multitude of ways.

Watching vision of Mac playing in the ruck, his follow-up work and ground-level touch is mesmerising. Whether it’s quickly reacting to a loose ball or immediately tackling the puny little midfielder who’s tried to shark his hitout – it’s an instinctive behaviour that’s hard to teach. His work on the ground could trick onlookers into thinking he’s much smaller than he is, showing great touch below the knees while being able to fire off a quick handball in congested stoppage situations.

In his second-highest disposal tally game and final NAB League game in 2021, the high-flying highlight reel recorded 17 disposals (9 handballs), 16 hitouts, four marks and 67 AFL Fantasy points. Granted, these fantasy numbers don’t pop off the page; it’s truly the eye test and those flashes of brilliance that gets us excited for bigger and better things.

Realistically, given his slight frame, it’ll unlikely we’ll see him featuring heavily – if at all – at centre bounces early on in his AFL career. As we touched on with Sam Darcy, it’s virtually unheard of to get quality fantasy production from taller players doomed to play key positions early in their career. I expect Andrew will be no exception.

Despite yet another Mummy apparent un-retirement announcement, Mac’s a chance to land at the GIANTS if they trade down, offering a potential smooth pathway to a ruck spot in the near future when Brayden Preuss inevitably breaks down. Whether it’s G-Dubs or another team, Andrew is widely considered a top-10, potentially even a top-5 pick in this year’s draft with his tantalising upside.

If he lands at a club with an easy route to the number one ruck mantle, Andrew is certainly worth a flier in deeper leagues and dynasty leagues – just don’t expect him to be a fieldable fantasy option in 2022.