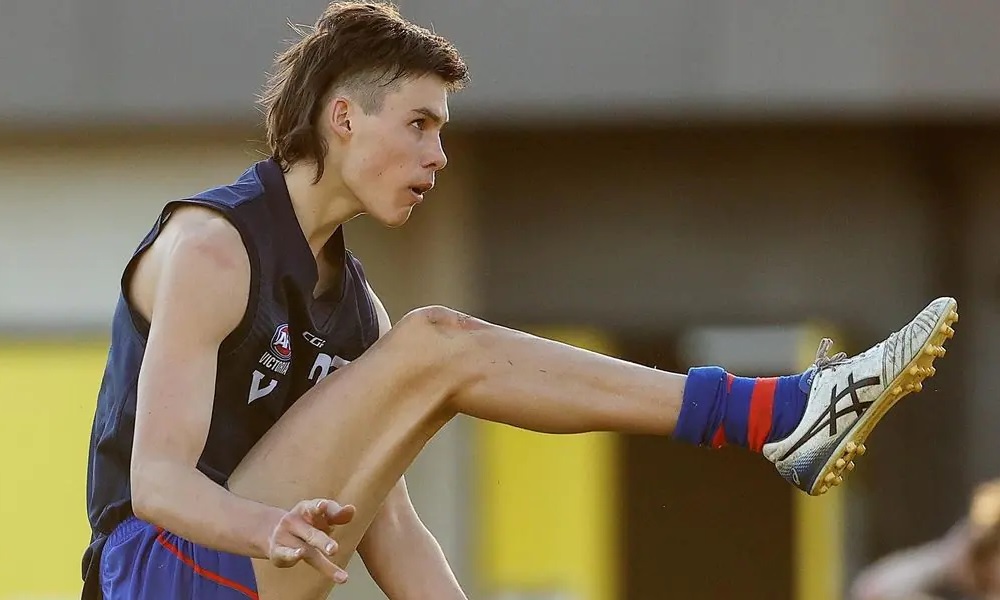 Sam is a 204cm key position utility and potential future ruckman, storming up draft boards across an impressive 2021 season in both the NAB League and high school competitions.

Playing primarily as a key defender with Oakley and a key forward at Scotch College (settle down Bevo, he’s not there yet!), his most memorable game came for Vic Metro in an Under 19s trial match – bagging six snags as he threw his name in the mix for a top-three selection on draft night.

It’s hard to point to one thing that was most impressive about the performance. Was it managing all of his six goals after the first quarter siren went? Perhaps it was pulling out an array of ground-ball gets, snaps, contested grabs and high-flying clunks? No, it had to be the carefully planned set shot routine, rivalling Ben Brown for quirkiness and proceeding accuracy.

It involves a half-squat followed by a pause for effect – the ball low in the squat stance – a controlled rise up and back down of the Sherrin, before starting a slow trot into the run-up. Glorious.

Telling the Road to the Draft podcast earlier this year that he likes to “be versatile” (EASE UP BEVO SERIOUSLY!!), it’s harder to project the 18-year-olds fantasy production should he begin his AFL career in his preferred position.

“If I had to say my most comfortable position, it’s probably that forward-ruck mix,” Darcy said.

“I’m loving playing in defence for Oakleigh at the moment, it’s good to be able to play in those different positions, but I think probably up forward and in the ruck is where I see myself.”

With Stef Martin, Tim English and Jordan Sweet still on the roster, it’s hard to see the 75kg Darcy getting too many centre bounce attendances in the early goings. Long term, could we see him average a fantasy ton one day in the ruck like pops way back in 2002?

“I do enjoy it in the ruck,” Darcy told Cal Twomey and Nat Edwards on the Road to the Draft podcast.

“I think it’s good to get up the ground and try and be like an extra midfielder when you’re in there.”

Darcy could be an interesting stash in deep 30-man plus keepers and dynasty leagues, purely for that forward-ruck potential – but don’t get too excited in the short term from a fantasy footy perspective.

Counting all 200cm+ top 10 draft picks since 2014 (including Luke Jackson – who fell 1cm short of the magical 2-metre mark), they averaged a collective 44.5 AFL Fantasy points across their rookie seasons. Nik Cox’s 2021 rookie fantasy campaign – an impressive, yet still modest 56.2 average – topped the two-metre-plus club during that span.

With Darcy, the Dogs could opt for a long-term approach, as we saw with Jamarra Ugle-Hagen this past season, or – given his versatility – he could be playing a back pocket, inside midfield, half-forward flank, ruck rotation for Bevo in no time!