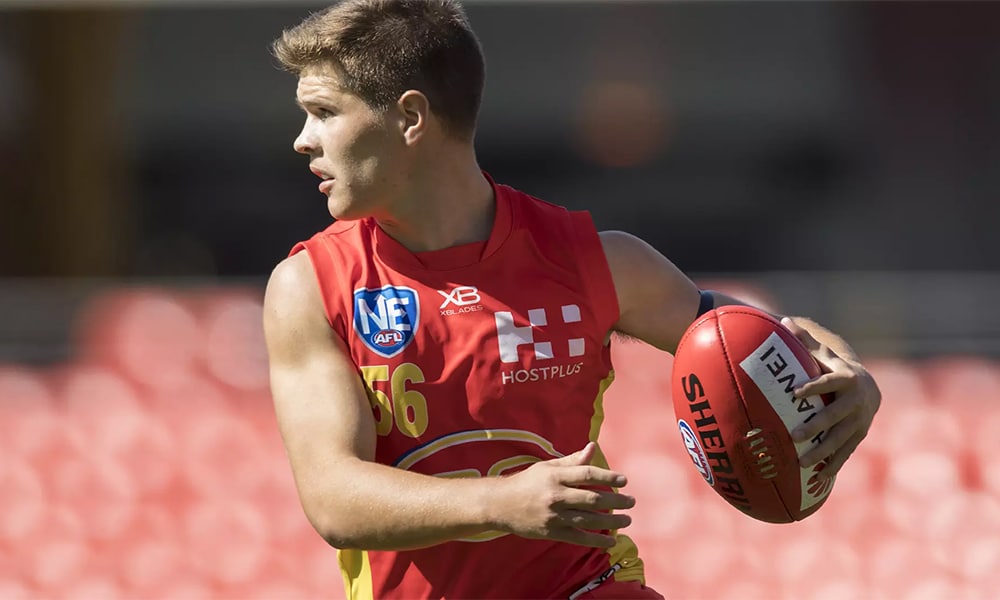 All year, I have seen this guy’s name at the top of the NAB League fantasy averages. But in the lead up to the draft, there was very little mention of his name.

After a little digging, I discovered that Gold Coast was able to pre-sign him as a result of the assistance packaged issued by the AFL. This means rival clubs couldn’t place a bid on him.

So naturally, Gold Coast waited until their last pick to grab him.

His NAB League scores were impressive. In terms of Champion Data numbers, he was ranked 3rd in the competition. He averaged 15 kicks, 10 handballs, 6 marks, 8 tackles and 119 AFL Fantasy points. He was second to only the number 1 draft pick (Matthew Rowell) in regards to fantasy scoring.

His biggest game came in round 5 versus Eastern Ranges, where he racked up 152 AFL Fantasy points. In this game, he had a whopping 16 tackles! That’s a lot of juicy four-pointers.

At the NAB Under 18 Championships, he was the second-highest scorer behind Tom Green, averaging 83 AFL Fantasy points per game. However, he didn’t manage to crack 100, with a top score of 99.

Probably the most interesting factor is his NEAFL performances. He played 8 games for Gold Coast’s reserves side, averaging 76 points per game. His best performance of the season came against Sydney University in round 15, scoring 91 AFL Fantasy points. He also had several other good performances where he games scoring in the 80s. Not bad for a kid playing against men in the seniors.

With Connor Budarick, don’t let the rookie tag scare you as this kid could be the real deal. He has fantasy smokey written all over him.

Hibberd was picked up by Essendon in the rookie draft, after formerly being listed by North Melbourne.

In his last stint at AFL Level, the half-back flanker played four games for the Roos (all in 2017) where he averaged 40 AFL Fantasy points per game.

After being delisted at the end of 2018, he went back to the VFL and played for Williamstown, where he flourished as a fantasy scorer.

His top score of the season came against North Melbourne in round 10, where he had 143 AFL Fantasy points. In this game, he had 15 kicks, 14 handballs, 3 marks and 12 tackles, showing his true fantasy potential.

Across the season he notched up 11 tonnes and was a prolific fantasy scorer.

He was always considered to be a player with huge fantasy upside at North Melbourne, but could not break into the side. Hopefully, he gets an opportunity at Essendon to show us what he can really do.

Gain access to all of the 2019 AFL Draftee’s fantasy numbers by becoming a member today!