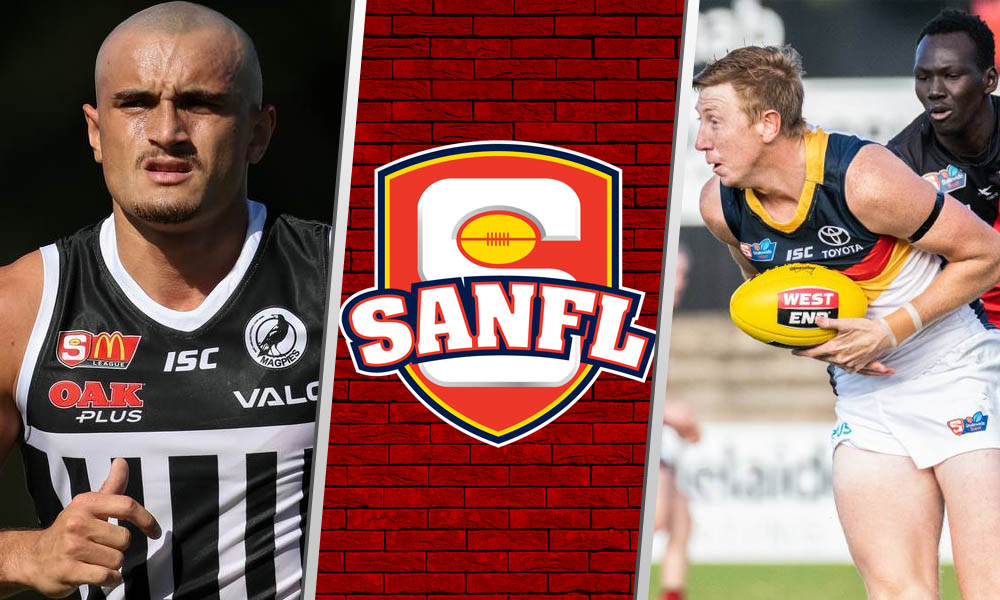 The SANFL enjoyed a pretty COVID-free season in 2021 which allowed us to get a good look at some of the up-and-coming youngsters from the Crows and Power sides.

To help you get the upper hand on your opposing keeper league coaches, our state league stats provide you with great insight into what’s happening at the lower levels, and in a league as strong as the SANFL you’ll get a mighty good guide on who can take that next step at the AFL level.

I’ve crunched the data and come up with my Top 5 players to watch for 2022 from the SANFL which include two former first-round draft picks, two emerging ruckmen, and an up-and-coming Crow who could end up being his sides’ Mr. Fixit.

In my eyes, this is a guy that is way too good to be playing at SANFL level but an indifferent season saw Sam Powell-Pepper feature at SANFL level five times in 2021.

After a delayed start to 2021, Powell-Pepper started his year in the twos with games of 98 and 133 AFL Fantasy points before being recalled to the AFL side in Round 7. This is where he stayed until Round 21 before being dropped back to the SANFL. He played another three SANFL games scoring 119, 84, and 43 before a recall to be the Power’s sub in their two finals.

When Powell-Pepper is on, he’s a mighty good player and a solid fantasy scorer. His two SANFL tonnes were 30+ disposal games and registered 8+ tackles, and a goal in each game. This shows just how good he can be.

After choosing to stay at Port Adelaide over the off-season, it’s going to be a career-defining season for the inside bull. If he can get himself fit and ready to play, he is a tantalizing proposition as a C/F dual position player.

He’s a high-risk versus reward player, and at his best, can be a game-winner in both fantasy and real footy.

It’s shaping as a huge year for Jackson Hately’s career. The former number 14 pick from the 2018 draft showed plenty of promise in his time at the Giants but failed to make a presence in a rejuvenated Crows team last season.

The writing was on the wall early last year when Hately was named in the Crows’ “second team” in the 2021 Pre-season.

After coming home to South Australia as one of the Crows key recruits, he only played 3 AFL games, featuring in Rounds 6, 7, and 16. His scores from those three games were 75, 54, and an injury affected 28.

Despite some average AFL form, he was much better at SANFL level averaging 23 touches and 102 AFL Fantasy points from his 10 games.

Throughout the season he notched up four tonnes, which included some big games of 140, 136, and 132.

Word is that he arrived at the Crows with a few injury issues and needed a good year to sort out his niggles. He was tracking nicely at GWS before moving home last year and now heads into his fourth year in the system. He’s a player I think will improve dramatically with fitness guru Darren Burgess at the Club.

As a mid-only in 2022, there is a good chance he is going to slide in a lot of drafts but with his fantasy pedigree, he could prove to be a real bargain pick up if he can cement his spot in the Crows’ best 22.

The Crows big man was a dominant force in the SANFL last year and many astute fantasy coaches will know he took that good form into the AFL late last season.

His AFL Fantasy average of 105 was the highest of any AFL-listed player in the competition to play over 5 games. He was a model of consistency at SANFL level, picking up 10 fantasy tonnes with a top score of 147.

Strachan got a taste of AFL footy in Round 22 and 23 due to Reilly O’Brien getting injured. Strachan held his own at the top level scoring 73 and 74 against two of the best big men in the league – Max Gawn and Todd Goldstein.

While I see it hard for Strachan to displace O’Brien in the Crows’ best 22, it’s good to know that should O’Brien pick up an injury or fall out of form, Strachan has exactly what it takes to be a very good fantasy ruckman.

He’s a definite handcuff for O’Brien owners. But you may want to keep an eye on the pre-season reports to see who’s in favour at West Lakes.

The other dominant ruckman in the SANFL last season was Port Adelaide’s Sam Hayes. Hayes was unfortunate not to get an AFL game last year but with Scott Lycett and Pete Ladhams around, Hayes’ lack of genuine forward craft cost him a spot.

Hayes averaged 14 touches, 5 marks, and 34 hit-outs in his 18 SANFL games but only managed to kick one goal for the season. He was also very consistent from an AFL Fantasy point of view, averaging 87.4 points, but never dropped below 56 in terms of individual match scores. However, his best score of the season was only 117 points, which raises questions about his ceiling.

There may also be some concerns regarding his size, but at only 22 years old, there is still time for Hayes to put on some muscle and start to use his big body around the ground.

With Ladhams off to Sydney, is 2022 the year that Hayes cracks the AFL side?

That’s the big question from this pre-season. Port Adelaide has a few backup ruck options in Dixon, Aliir, and now Finlayson, so it may be tough for Hayes but I’m happy to track his pre-season and see where Ken Hinkley’s head is at on his ruck set up for 2022.

James Borlase is my flyer pick for 2021. The 192cm key defender played 17 games in the SANFL last season and continued to improve as the year went on.

His scoring bump at the end of the season was due to taking over the makeshift ruck duties when Kieran Strachan was promoted to the AFL side as cover for Reilly O’Brien.

The Crows must’ve rated his season as he was named runner-up in their SANFL Club Champion Award behind Kieran Strachan.

Now it’s not likely he’ll ever be a number one ruck but it shows his flexibility. If he can find his way into the AFL side as a key defender, then he’s the likely chop-out in the ruck for O’Brien.

With Jake Kelly off to the Bombers and Fisher McAsey still developing, Borlase could very well be in line for a call-up in 2022.

Gain access to all VFL Fantasy Scores by becoming a member. Members can view the full table here.