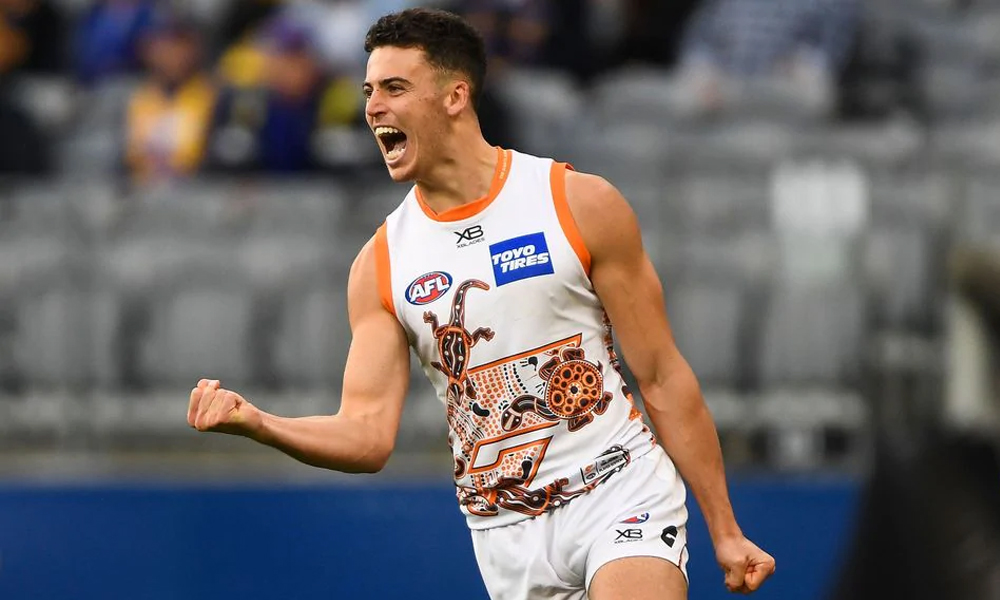 A few spots have opened up in GWS’s best 22 after Heath Shaw retired, and Zac Williams and Jeremy Cameron moved to Carlton and Geelong respectively.

It will be interesting to see who fills those roles, and which young players can develop to become permanent fixtures in the Giant’s best 22.

But without further ado, here are some players we think will be worth looking at for your keeper league teams.

How good was this young key forward in his first 5 games of AFL football?

He’s athletic, a reasonable size and knows where the goals are.

He started his career with an 87 (109 BCV) kicking 2 goals, with 16 disposals and two marks. Across his 5 games of 2020, he kicked 9 goals which definitely helps the fantasy tally, but we feel the more impressive stat line was the 30 marks he took over the course of these games.

There is a lot to like about his prospects heading into 2021. Jeremy Cameron has left the giants which opens up a permanent spot in the forward line, but also the simple fact he’ll get another preseason under the belt and should be better adjusted to AFL football.

Riccardi will be available in a lot of leagues. We know that forwards are going to be hard to come by this year and he’s shown he can score, so he’ll be a handy acquisition to your side if you can get him.

Up until 2019, Callan Ward was a durable and reliable fantasy scorer.

He returned to football in Round 2 of 2020 and managed a decent score of 79 (98.8 BCV) the following week against the Western Bulldogs. He continued to play for the next three weeks and then injured the knee again. He returned in Round 10 but didn’t score anything of note before injuring his finger in Round 13. He had surgery and missed the remainder of the season.

The big question is: Can he return to his best?

He is 31 this year, and with a couple of injury-interrupted years hampering his form, I’m not sure he has what it takes to return to his best. However, I do think there is some value in Ward as a later selection in a draft. If you’re hunting a flag this year and you are not too concerned about age, he wouldn’t be the worst M7 or even just a handy bench cover.

If you can get him late, he’ll be servicable.

With Caldwell and Hately leaving, he jumps to the top of the pile when it comes to the younger brigade GWS midfielders.

He only played six games in 2020 for an average of 52.7 (65.9 BCV), as it seemed one of Green or Jye Caldwell was selected each week. With Caldwell leaving, this is no longer an issue.

Looking at GWS’s midfield depth, he sits behind players like Coniglio, Taranto and Kelly, but he’s probably the next in line after those players.

I think GWS may be in a transition phase this season, so we hope Green gets a bit of time invested into him throughout this period.

He may still be a year or two away from a breakout season, but we definitely think he has potential.

One of the biggest keeper league moves was Preuss’ trade to GWS.

All Preuss owners are rejoicing and it’s easy to see why.

In 2019, he was the highest averaging VFL player in the league, going at 132 AFL Fantasy points per game. Obviously, when he was at Melbourne he was behind Max Gawn, but in games where Gawn didn’t play and was the lone ruckman, he put up some great numbers. In 2019, he played the one game without Gawn and scored 108 points (with 44 hit-outs next to his name). Last season, he played two games without Gawn and had scores of 60 and 65 (75 and 81 BCV).

He also put up some big numbers when playing for North Melbourne. He played 7 games in the 2017 season and had two separate scores of 105 and an 87. He averaged 67.2 for the season, but he played alongside Todd Goldstein most of the time, which hampered his scoring.

Looking back, he was at North Melbourne behind Goldstein and then moved to Melbourne to play behind Gawn, so it’s obvious he’s made some bad career choices. But he’s finally the number one ruck at a club and this should translate to better fantasy scoring.

Owners should be expecting big things from Preuss this season, and if he’s available in your league, get him into your side.

He had scores of 101 and 83 from his Marsh Series games playing a fantasy-friendly role running out of defense. He looked the goods and people rightly got excited, but in his first two games of the season, he could only manage scores of 36 and 38 before getting injured and missing a large chunk of 2020.

With Heath Shaw retiring and Zac Williams moving to Carlton, there are a few spots up for grabs in GWS’s defense, and he should get an opportunity at one of them.

If he can seize that opportunity, he shows a lot of fantasy potential.

He was likened to Dane Swan in his draft year in the way he moved, but also likened to Caleb Daniel due to his height. But the common link is the way they use the ball, and Daniels was an exceptional ball user at underage level.

Whilst he has shown glimpses of this at AFL level, he hasn’t been a huge fantasy scorer. However, there were two games in 2020 where he scored over a 90 BCV amongst a handful of other reasonable scores.

Whilst Kaes loves him, I’m not sold. I’m not sure he plays a role that will be conducive to fantasy scoring, seeing though he is a small forward and they historically don’t score well. I’m willing to change my mind if he can get some more time up the ground but I don’t see it happening.

He might be worth drafting late as cover, as he will play most weeks, but don’t expect big things.