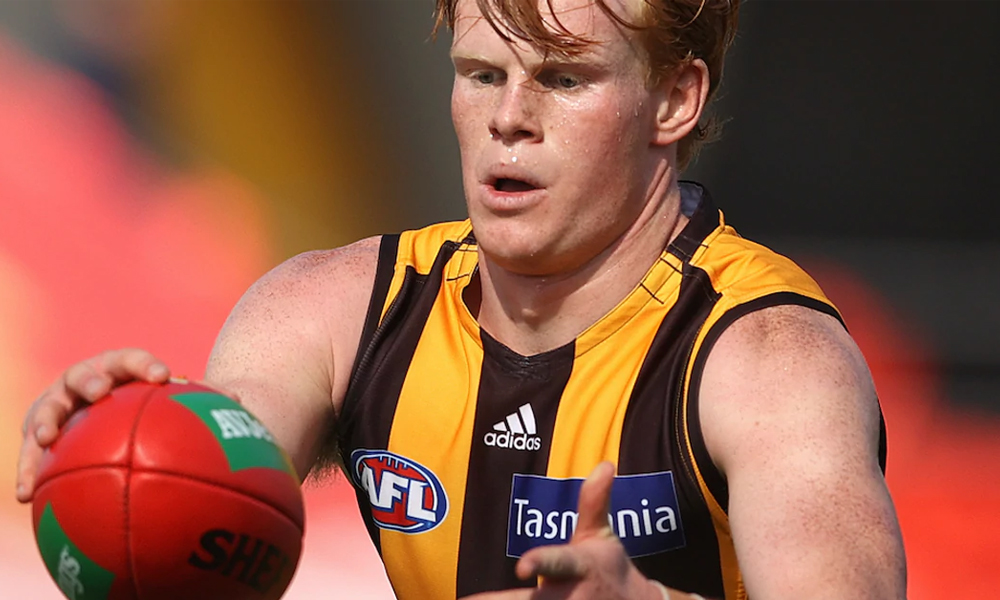 Hawthorn is a side that seems to have a raft of players on the cusp of breaking out as they enter the second year of their rebuilding phase.

Hopefully, some of the selections in this article can stand up and become decent fantasy scorers in 2021.

Scrimshaw finally got the run of games we had all been waiting for in 2020.

In previous years, he has been hampered by injury and struggled to find his place in the team. Last year he managed 13 games and produced some good numbers among them, including top scores of 86 (107.5 BCV) against the Crows in Round 15 and 84 (105 BCV) against the Bombers in Round 14.

But it’s just not the injury-free run that led to this turnaround, it also had to do with the injury to James Sicily which came in Round 12. Scrimshaw seemed to be the player that slotted into Sicily’s fantasy-friendly role and averaged 68 (85 BCV) after he went down.

However, his scoring did seem to dip in the final three games of the season. This coincided with Damon Greaves coming into the side and winning a lot of the footy across half-back. It’ll be interesting to see how this pairing goes in 2021.

There’s also the injury concerns of the past haunting him and the fact he’s never strung a full season together in four years at AFL level.

The concerns above may cause some doubt in coaches’ minds when drafting players in 2021, but we think if he can remain fit he has a good chance of becoming a handy scorer.

It feels like Jack Gunston has been around forever, but he’s still only 29.

He averaged 61 (76 BCV) last season, which was basically on par with his 2019 numbers. However, his numbers from the past two seasons were down from the period between 2014 to 2018, where his lowest average throughout this period was 82.8.

But in the years where he did average above 80, he was playing in premiership quality sides, or sides that were contending for a flag at the very least. This isn’t the case for Hawthorn anymore and probably hurts Gunston as the ball is spending less time in his area.

However, we still think he’s a handy option. His lowest score of last season was 41 (51 BCV), which isn’t that bad in the grand scheme of things. His best score of the year was in the final round of 2020 where he had 110 (137 BCV) AFL Fantasy points, showing us he’s still got it.

In a draft pool that has limited good forwards, he holds a bit more value in 2021.

He’ll probably be placed back into a lot of draft pools as he’ll miss the start of the season, but grab him if he’s available – he’ll be a good forward option come finals time if you’re pushing for a flag.

Impey did his ACL in the back end of the 2019 season, causing his 5 games of 2020 to basically be written off as he transitioned back into the game and regained fitness.

He averaged 38 (48 BCV) and played a lot more up forward – a position that we haven’t seen him play for some time. This affected his scoring but the positive is it adds forward status to his name in 2021.

Hopefully, this year sees him return to his half-back role where he tends to produce better numbers. Impey was on a hot streak before disaster hit in 2019, averaging 85.2 across the 5 games prior to injuring his knee.

When players come of a serious knee injury, you expect them to have a down year as they need to regain some confidence in their bodies and need time to return to the correct mindset for playing competitive football. This could be the case for Impey.

Whilst we’re not guaranteeing huge scores from Impey, there’s definitely potential here. He’ll slide in draft pools so you will be able to pick him up late and perhaps score yourself a bargain.

I’m seriously in love with this kid.

He came in at number 13 in our ‘Top 20 Fantasy Draftees’ podcast last year, and should have been higher in retrospect.

After averaging 107 in the SANFL U18s competition in 2019, he debuted last year in round 6 and hit the ground running.

He averaged 59.6 (74.5 BCV) playing a fantasy-friendly half-back role for the Hawks.

For a player in his first year, these are very good numbers.

Given the state of Hawthorn’s list, his place in the side should be quite secure. However, with Scrimshaw, Greaves, and Impey all playing similar roles, as well as Sicily returning to do the same in 2022, there is going to be competition.

With all that said, we do think he’ll be a fantasy gun of the future.

We’re really high on him and believe you should be too.

He is on the precipice of #YourBoy status for Kaes, and on the cusp of being a real mover and shaker on the fantasy front too.

He was the sixth highest averaging Hawk last year, scoring more per game than both Liam Shiels and Chad Wingard. He has a genuine fantasy game but just can’t seem to crack the Hawks side consistently.

He knows how to find the footy – his lowest possession count in any game of 2020 was 16 touches, and had a high of 24 disposals in that last game against the Suns. He is also a good tackler, so we should see some ‘plus fours’ coming from him in this stat category.

Looking back to 2019, he had one game where he scored 108 points from 68% time-on-ground against a good GWS midfield. We believe this shows his true fantasy potential.

He has the tools to be a great fantasy scorer, he just needs to find a permanant spot in the side. At 22 years of age, this should happem sometime soon, and when he does lock down a spot he’ll be a good fantasy player for your team.

Damon Greaves is technically #2G4P (Too Good for the Podcast), but he only played three games at the end of 2020, so we feel he’s an outlier here.

He looked composed for a player in the early stages of his career, but also played a fantasy-friendly role off the half-back line that will interest many coaches out there. He was good in traffic, has great disposal, and also looked like he can lay a tackle or two.

He averaged 17.4 disposals and 90.4 percent disposal efficiency – best in the league albeit from three games. This tells me he’s going to be a player that Hawthorn wants to give the ball to distribute cleanly. This should be good for his fantasy scoring.

Greaves also took 5.7 marks per game which is in the elite category across the competition.

I know it is early to call, as he’s only played three games, but I reckon he’s got the goods.