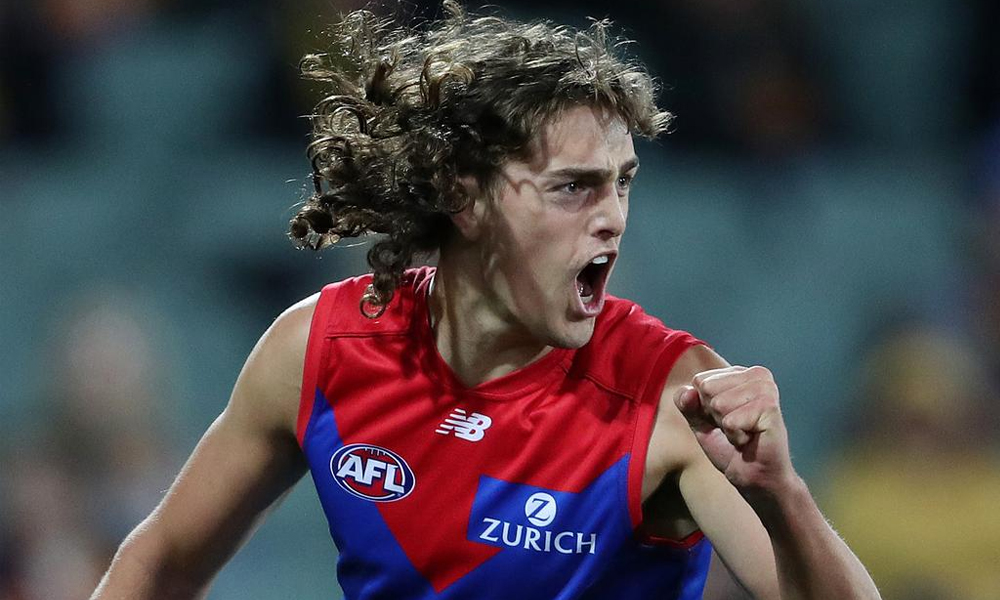 Melbourne are a side that have only six players with #2G4P status.

Whilst that might not be great news for Melbourne supporters, it’s great news for fantasy coaches as this means there are a lot of players we can look at for keeper league potential.

Here are our picks for Melbourne:

This kid’s had no luck so far. Consecutive knee injuries in the past two seasons have kept Nietschke out of the game.

But his underage fantasy potential is the reason why we keep hanging on to hope. He averaged 124 in the SANFL U18s competition in 2018 playing as a running half-back flanker.

For those who haven’t heard, Nietschke was delisted in the offseason but has since been thrown a rookie contract. This tells me that the Demons obviously rate him and see him as part of their future.

Given that we haven’t heard anything about him in the offseason, we assume that he’s training with the intention of completing his first AFL preseason and is eying a debut at some stage in 2021.

Whilst he piques our interest this season, he’s a still along-term prospect as he’ll take a while to recover and regain confidence from his injuries before he’ll play at AFL level.

If he can get fit and find a place in Melbourne’s side, he should play a game suited to fantasy.

But that is a big ‘if’ at this point in time. Draft him late and hope for the best.

This young Defender gave us a solid debut season and showed fantasy coaches that he has potential.

The positive end to 2020 tells that he’s likely to be in the best 22 more consistently for Melbourne this year, and we expect him to improve his scoring if he is.

Another thing about Rivers that gives us confidence are his junior numbers. He was a star in the WAFL Colts, averaging 109.8 AFL Fantasy points from 9 games in 2019. He also averaged 81.2 for Western Australia at the Under 18 Championships that year.

He looks to be a talented player who has plenty of poise for a kid coming into his second year of AFL football. We feel that he’s player that you can pencil into your defence for years to come, so get on early if he’s available in your draft.

He’s on our podcast every year, as he never gets #2G4P status. But he’s a reliable addition to any keeper league side.

But thankfully, he got back to his best last year. He had four scores above 80 (which equate to BCV scores of over 100 AFL Fantasy points) which shows his scoring potential.

He also takes kick-outs which adds to his scoring power, and he’ll have more room to take those this year with the changes to the kick in rules (you would expect every kick-out to be worth three points this year).

If you can get him as one of your last defender or a luxury bench option, you’ll be laughing.

We’ve had a few questions about Fritsch’s fantasy relevance this year and he is a genuinely intriguing proposition.

But does he have another level to go to?

I think a lot of this hinges on how well Melbourne’s forward line operates around him. McDonald, Weideman and Pruess never fired a shot last year which meant the Dees relied on Fritsch to play deep in the forward line to have any chance of kicking goals.

The arrival of Ben Brown could really change this, and if Tom McDonald or Sam Weideman can get into a groove with Brown, Fritsch could really be released up the ground more.

Now that Christian Petracca is a permanent midfielder, we could see Fritsch play the ‘connector’ role for Melbourne.

But is there a bump there? There are signs point to one but given he plays for Melbourne, we wouldn’t be surprised if it doesn’t happen.

However, we think that he easily notches up a 75 average again this season. But if all the cards fall into place we could see an average in the 80s.

Either way, he’s a safe bet for your forward line.

Harmes had a very disappointing season in 2020.

After averaging 83 in 2018 and 94 in 2019, Simon Goodwin decided to experiment with him as a defender. And that experiment failed miserably.

Unfortunately, Harmes was the player who suffered most from Petracca’s move into the midfield. It caused him to be tried in different positions, first up forward and later in defence, which just didn’t suit his game.

The only positive of his exodus from the midfield last year is he gains defender status for 2021.

To get back to his best, he needs to play in the midfield.  And it makes sense for Melbourne to play him there; he matches up on bigger bodies well and Melbourne’s midfield was absolutely monstered at times last season.

Thankfully, reports tell us he’s back training with the midfield group this preseason and is likely to line up in the middle come round one.

If this is the case, he is definitely worth picking up. And if he gets that midfield time, he should be able to average around the 80 mark, which is gold for a defender. But if he doesn’t, he belongs on the scrap heap.

Here is another one of Kaes’ boys.

Whilst I’m not as excited as Kaes, I do think he has potential.

He only averaged 38 (47 BCV) in his first season, but he showed some potential. He moves well for a big guy and is clean below the knees. When ruckmen show traits like this, they usually end up as pretty reasonable scorers.

He played his best game against Hawthorn in Round 7 last season, scoring 59 (74 BCV) playing predominantly up forward. Whilst he didn’t ruck much last season, he did have 14 hit-outs against the Crows going up against Reilly O’Brien – one of the best rucks in the league.

He’s obviously going to struggle at Melbourne behind Max Gawn, but at 29 years of age, he’s coming into the final stages of his career. As a result, we see Jackson coming into the frame as Melbourne’s number one ruck in a couple of years time. Until then, you’ll have to enjoy what he does up forward.

Kaes has said he’s keeping him, but he is also crazy. I’d suggest waiting a few years on Jackson, and pouncing on him when Max Gawn looks like he’s ready to hand over the reins.