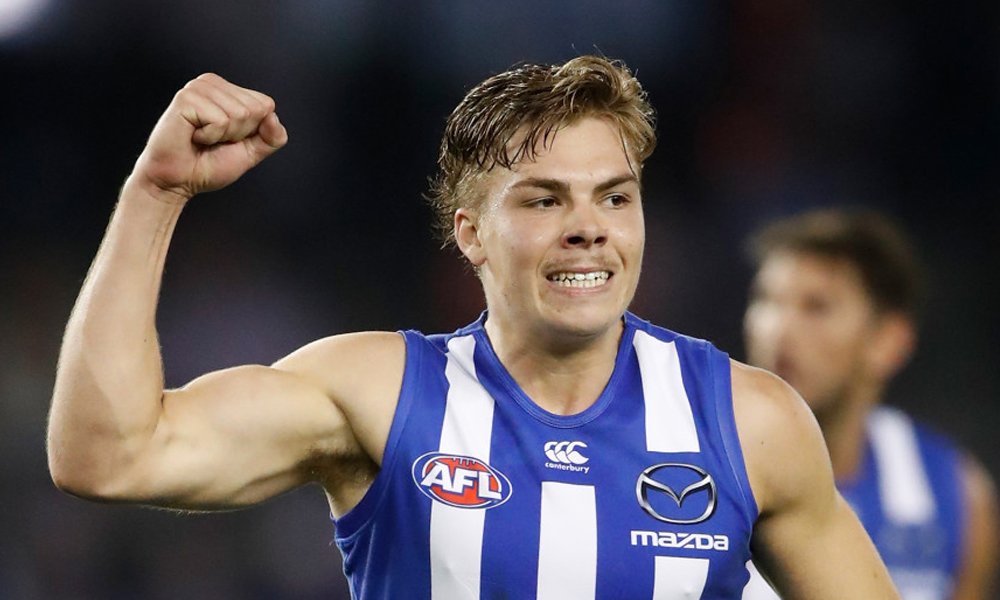 There is a hint of optimism at Arden Street this year.

While they are still a long way from challenging many teams, North are going to blood a lot of youngsters which is very exciting for fantasy coaches.

Here are our picks for the Roos:

LDU was the kid who got all the fantasy hype in his draft year and after years of injures, he finally put it together in 2020.

After missing the start of the year with injury, he came into the side in Round 9 and started to build from there.

Had a quiet first game but then went bang in his second game of the year against the Crows.

He had 78 points (98 BCV) in that game and the LDU bandwagon was full again!

LDU really held his own against some good midfielders, including sides like Brisbane which is really positive.

He averaged 56 (71BCV) for the year which is very solid after coming off injury.

With the lack of class North have, he’s going to get every chance in that midfield and could be one of their better players in 2021.

The only issue issue hanging over his head is his overall fitness. Although after years of injuries he looks to be fit and is apparently flying this pre-season!

He has a heap of upside and the way he finished off 2020, he will have a lot of admirers in your keeper leagues. And rightfully so.

2020 was a genuine nightmare for Jack.

Ziebell averaged 47 BCV from his 8 games which was a whopping 42ppg down from his 2019 average.

A mix of injuries and playing deep forward in a horrible side just killed his fantasy game. He only had double figure touches on two occasions which is just unheard of for a man of his class.

He’ll be 30 later this month but there is still plenty of good footy left in JZ!

There is a lot of chat about him going to a back flank which I find a little weird, considering they have an okay backline on paper. While he’s being trialed down there, it will be interesting to see what happens when the season begins.

Ziebell is definitely one to target, especially in start up leagues based on his 2020 ranks. He should also be a target for those teams hunting a flag in 2021.

We both feel like this guy is going to explode at some stage.

The big question is when? Maybe this year but more likely next year.

Thomas was part of the ‘super draft’ and was North’s first round selection at Pick 7.

2020 was his second year of footy and he only averaged 39 but this did include an injury effected score of 9.

He was then sent away for ankle surgery and we didn’t see him again.

In his first season he averaged a respectable 55 points per game and played the majority of the year.

While he has played most of his footy up forward, I feel like it’s only a matter of time before he is unleashed into the midfield.

My astute co-host has noticed that Tarryn is becoming the face of the club this year and he seems to be in every one of North’s media photos.

Thomas is coming into his 3rd year, which we all know is the year of the breakout!

However as he missed a lot of 2020, I think he’ll need another full season under his belt before we see the best of him.

Look for him to slowly blossom in 2021 before taking the competition by storm in 2022. Stash him if you can!

I am that big on THE ZURHAAR this year that I just traded him into my side this pre season.

Firstly, I just love watching the big bull go about his work but I also think there is something about the young Roo from a fantasy perspective.

Zurhaar scored 75+ in 6 of his 16 games last year which is promising for a guy who played majority forward in a bad side.

Looking back, Cam also had two 100’s in 2019 which really convinces me there is something there.

It’s going to be very interesting what happens in the Roos forward line as there is genuine lack of height. Nick Larkey is probably the biggest guy down there, so is The Zurhaar the second big dog up there?

We heard Trent Dumont mention that Zurhaar could get some midfield time this year, which has since been backed up by David Noble.

I think someone like Zurhaar provides plenty for them in the middle and is a mini Jack Ziebell clone in my eyes.

What worries me slightly is that he’s always been a genuine forward. Not one of these guys who played mid in juniors and is being forced up forward.

Monitor the rest of his pre-season to see if you can sneak him into your keepers. Worst case he is definitely worth a roll of the dice as an early-mid pick as a forward.

Heff has some serious man love for this guy but I’m not 100% sold.

Yes, he was a good underage scorer. In fact, he had the third highest average of the 2018 U18 champs behind Sam Walsh and the untried Kieren Briggs.

He averaged 98 playing for the Allies in that carnival and also played some NEAFL footy for the Gold Coast as a teenager averaging 75.

He even tonned up on debut in 2019 – playing across half back. This sent Heff crazy but that’s also where his fantasy prowess stalled.

He went on to have a couple lean weeks and wound up back in the VFL before getting injured.

In 2020, he started forward and was quiet in terms of fantasy. He started to get a few more opportunities in the midfield and on the wing which saw his scoring improve.

It’s interesting to see where he sits in North’s midfield mix in 2021. Especially with the arrival of Stephenson, Phillips and Powell, the return of Cunnington and the improvement in LDU.

While I think he is in their Best 22, it wouldn’t surprise me if he’s stuck up forward a lot this year. Then again, he could be ready to take his game to the next level in this third year.

He holds forward status which means he’s definitely worth taking a punt on but what he averages this year is a bit of a mystery to me.

If ever there was the year for Jaidyn to deliver on such promise it’s 2021.

Don’t forget this kid averaged 81 back in 2019 and hopefully the move away from the Pies is the change he and fantasy coaches need.

Looked a shell of himself last year but he gets every opportunity this year.

From all reports he’ll get his chance through the midfield/wing instead of being stuck up forward.

Like a lot of coaches, I’m keen on Stephenson’s prospects this year and if there is one forward who can go from zero to 100 this year, it’s him.

Definitely a keeper and one you must target in your league.