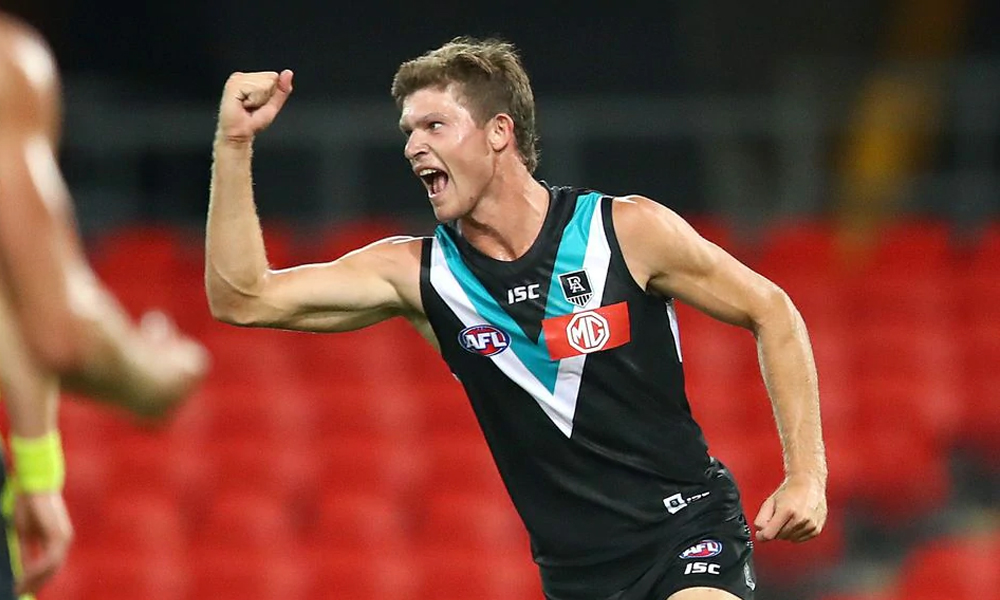 This week I get to write about my beloved Port Adelaide!

Before you all start rolling your eyes and tuning out, I promisee that I will only discuss six players and I will also try to keep it brief.

Scroll down to see which Port Adelaide players I think will make handy additions to keeper league sides in 2021.

Kaes was desperate to sneak this guy into the show as he genuniely believes he’ll become one of the most exciting tall forwards in the competition.

What does he like about him? Well, he kicked a goal in 5 out of his 7 matches this year which included a three-goal haul against Melbourne. In this match, he put up 72 (90 BCV) AFL Fantasy points.

But it’s the way he moves that is also exciting. He can get on the lead, leap effortlessly to take a big grab and get’s into some dangerous positions. He can lay tackles for a bigger player too, recording 14 of them in his 7 games of 2020.

Whilst he is still young and raw, it was promising to see him get a run this year, especially considering he came off an ACL injury in 2019.

He’ll only get better as he puts on size and is a player you could take the punt on this year as there is a lot of upside.

A lot of coaches are expecting more midfield minutes this season, but I’m sceptical. His forward pressure is so valuable for Port Adelaide, especially when their whole game plan is based around keeping the ball inside 50. However, I do think he’ll be a good fantasy scorer, but maybe not the 100+ average type that some are expecting.

Over the years, I see him being a Robbie Gray or Toby Greene type in fantasy who will mainly play up forward and rely on pinch-hitting up the ground, which is fine because he’ll keep forward status each year.

I think he’ll earn his #2G4P status in 2021, and if he’s available in your league then get on board now. He’ll be a handy fantasy scorer for many years to come.

He’s one of the most frustrating players in fantasy football. His best is exceptional but he never seems able to stay on the park, often being forced out due to injury.

His debut season in 2017 was fantastic. He averaged 85 in that year with three scores of over 100 but has been in and out with injury ever since.

He could only manage six games last year but did have high scores of 79 and 86 (99 and 107 BCV), and that score of 86 came from a game where he only played 61% time-on-ground before getting injured. This shows his scoring power.

Whilst we’re big fans of his work, he always seems to be one soft tissue injury away from missing a large chunk of footy. But we really hope he gets his body right, as he has the makings of a fantasy star.

If you own him, you’d be hesitant of getting rid of him because you’d kick yourself if he reached his full potential and you missed it by trading him out. Although, if you are offered a good deal for Burton, you may have to think about taking it.

Ladhams is an interesting prospect with his forward status.

These numbers look great, however, all but one of them were scored rucking solo with Lycett out injured. Once Lycett had gotten over his mid-season injury, he put up numbers of 56, 41, 28, 48 and 29.

He’s the type of ruckman that’s great around the ground but doesn’t do enough to give his midfielders hit outs to advantage, hence why he was used in the middle less than Lycett. As Port rely heavily on first use and getting on top in the midfield, I feel like he’s only going to be a pinch hitter for the time being and mostly play up forward.

For him to score well, you basically need Lycett to get injured. But as you’ll likely be handcuffing the two, you’d have to play him in the ruck which negates the advantage of his forward status. You almost need a third ruckman to make his selection viable. This is a situation most fantasy coaches would prefer to avoid and go after a ‘set-and-forget’ type ruckman.

I’ll personally be keeping Ladhams due to the scarcity of forwards, but I don’t think too many coaches would envy me.

You can add Fantasia to the ‘frustrating players list’ with Ryan Burton.

He has never managed a full season before (his best return was 19 games in 2017) and has only played 32 matches in the last 3 years.

His best season of footy was in 2018 where he averaged 79 from 13 games. In that year, he notched up three tonnes and didn’t have a score under 50 – an impressive effort for a small forward. His start to 2019 was good, scoring over 100 points twice in the first five rounds, but then was in and out of the side with injury for the remainder of the year.

If he can get his body right, he should be in Port Adelaide’s best 22. But that’s a big ‘if’. Even if he were to play consistently, I believe his recruitment is to free up Connor Rozee to move into the midfield whilst Fantasia stays close to the goals.

In Fantasia’s previous best scoring years, he was able to get up the ground to increase his scoring. I don’t see this happening at Port Adelaide as there many ahead of him that would get the opportunity first.

The positive thing about Fantasia is his DPP status for 2021, which makes him handy cover for your forward and back line but this is probably the only goof thing about him at this point in time.

He started the year like a house on fire, with a noticeable bump to his midfield minutes and his scoring reflected that. But as the year went on, he developed a niggling foot injury which caused him to miss a few games and move back to the forward line when he returned.

We mentioned this earlier, but we think the recruitment of Fantasia is telling – they want to play Rozee in the midfield. But this will only happen if he is 100% injury free.

Earlier this year, he was spotted still wearing a moon boot but this was probably precautionary. If his foot is right, he’ll spend the majority of the year in the midfield but this will probably cause him to lose his forward status.

I personally think it doesn’t matter too much as I believe he has the potential to become a gun midfielder of the future.