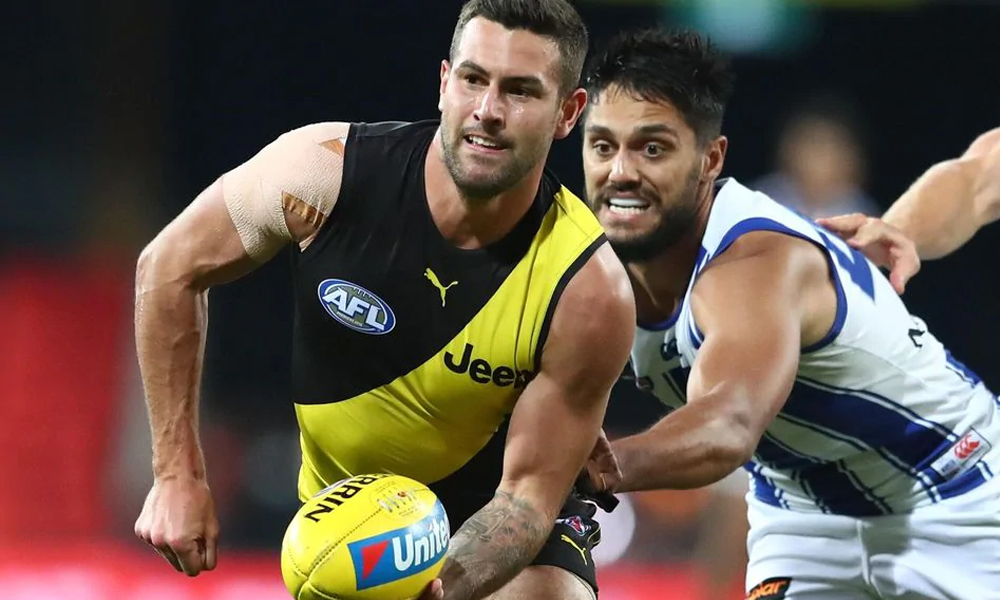 They’re not always the most fantasy friendly team but boy do Richmond have some quality players on their list!

With a few of their genuine starts nearing the end, is 2021 the year we’ll see some of their talented youngsters take the next step?

Let’s look at which Tigers might be worth a spot in your keeper league sides this season.

It looked like Ivan Soldo replaced him last year as the number 1 ruck but unfortunately for poor Ivan he did his ACL and will miss all of 2021.

The stat you need to know about Nank is what happened after Soldo went down with injury.

Rucking solo he was unstoppable, averaging 72 (90BCV) from those 6 games without Soldo.

Now is the time to buy Nank stocks.

He’ll be the number one ruck in 2021 and for the majority of 2022 while Soldo returns to full fitness. Add to that he’s a proven scorer and at 26 years of age, he’s a great long term ruck for your keeper side.

Baker is a guy I was a little disappointed in last year.

I thought he might have been a genuine breakout contender but I think he’s just going to be that steady back flanker for most of his career.

Not that there’s anything wrong with that. I just wish he could be more!

A 72 average back is never anything to sneeze at but unless he finds a heap of self raising flour I just don’t think Baker’s average is going to rise.

I was excited after seeing his one very nice hundred in 2019 and while he did produce two BCV tonnes last year, he just didn’t take his fantasy game to the next level.

One thing Baker does have is an exceptional floor. His worst score last year was a 46 (BCV 57) and as a D3-5, that’s perfect.

Maybe I’m just a little down on him because I thought he could have been a bit of a Rory Laird clone but with Houli still hanging around and Short the heir apparent, I think we’ll just see Baker play a helping hand again in 2021.

The development of Shai Bolton probably say Lambert play more up forward which is a reason for his drop.

For owners, the silver lining was that he retained his forward status and probably makes him very relevant this year.

He’s 29 years old now, so not one to really be looking at if you’re building for future but a great option if you’re gunning for a flag because you may be able to get him rather cheap.

In a year where forwards are scarce, he’s one to keep your eye on as he’s pretty consistent and firmly entrenched in Richmond’s best side.

He was one of my waiver wire recommendations from last year who really delivered late in the season for coaches.

He’s a super non sexy selection but one that could pay dividends for your side late in drafts.

McIntosh missed the start of the season but found his way into the Tigers side and really cemented his spot on their wing and played it beautifully.

He had a couple 80’s which are BCV tonnes and was pretty consistent with his 55 (69BCV) average.

He’s a mid only which probably doesn’t make him the most attractive proposition for a lot of coaches but for me he’s a super safe selection.

His spot on the wing is locked in and he’s only 26.

The Tigers seems to play a lot of Thursday/Friday games so could be a handy loophole option if needed.

A super safe, late draft pick who will be a stress free, consistent depth player in your side.

There’s been a bit of interest in Jack Ross over the last couple of years.

He debuted in 2019 and scored 86 points in his first AFL game. He then had a top score of 92 two weeks later which is his career best to date.

In both seasons he averaged around 62 which is a solid start to any young career.

What was promising is that when he did come into the team, he was thrown into midfield roles.

What’s not as promising is Ross’ position on the Richmond depth chart. Like Jack Graham, he’s fighting for proper midfield time in that Tigers side.

When he did play, he did some nice things and averaged 8 CBA’s over his 7 games.

I think there is something there with Ross, he just needs to get a proper crack at it.

Unfortunately it’s hard to see him get a heap of opportunities in the side this year, so if you’re able to stash him away 2020 might be his go.

Through our socials, I’ve seen a lot of concerned coaches who have contacted us about Jack and as an owner myself, I’m thinking of starting up some kind of support group.

I was shattered when he turned down a move to the Crows in order to sign another contract at the Tigers.

The Tigers firstly aren’t a great fantasy team and then add to the fact that they love to play Graham out of position on a wing it just hurts!

His best is top shelf. We just don’t see it regularly enough.

I love that he’s a tackling machine and when he gets the chance to play inside his scores rise.

The issue with Graham is that he’s effectively a handballer, so he really needs that inside role to help his fantasy scoring.

He has 5 career tonnes including a 146 point PB which came from a 14 tackle game.

He’s behind Prestia, Martin, Cotchin and Edwards for a spot in that midfield and Shai Bolton is another one who’s kind of jumped him in the queue.

2021 looks to be an awkward year for Graham as I think he’s waiting for Titch and Cotch to retire so he can properly step into his natural inside role.

If you can carry him through 2021, you may be rewarded big time.