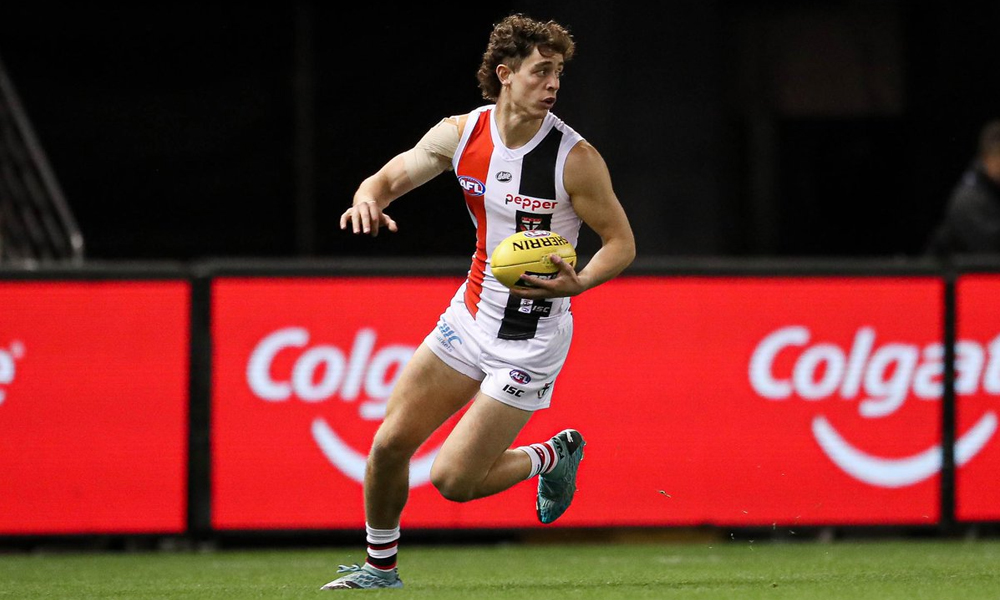 Kaes owns Josh Battle in our league and has no idea what to do with him. He likes his style of play but thinks he’ll most likely have to put him back in the pool. I’m sure there are many coaches out there who think the same.

The biggest issue with Battle is he doesn’t seem to have a defined role. One week he’s playing on the wing, half-back the next, then playing up forward and then pinch-hitting in the ruck. This prevents him from finding a rhythm and becoming a good AFL Fantasy scorer.

He had a great 2019 campaign, averaging 68 from 19 games which included three scores of over 100 points. In those bigger games he had over 20 disposals in each one, demonstrating that he can definitely find the football.

When he’s playing off the half-back line he’s a decent fantasy proposition, but the issue is St Kilda have an abundance of players that could play across this line. And as mentioned before, he also gets thrown up forward to support Max King and Tim Membrey. Whilst he’s quite a good player in that role, it’s not great for fantasy scoring.

In 2020, he did manage one big score of 91 (113 BCV) but that was against Essendon, who were poor all season, and he was allowed to play a fantasy-friendly role in that game. This obviously didn’t happen every week as he only averaged 51.8 (64.8 BCV) for the season.

If he can get a fantasy-friendly role that he plays consistently, he’d be a good option but I feel he’s too valuable for St Kilda as a swingman for this to happen.

It’ll be interesting to see what happens with Seb Ross this season.

It was like he swapped roles in the midfield with Jack Steele last season, becoming more of a defensive midfielder and sometimes playing tagging roles. Whilst he had some shocking games in 2020, there were a few highlights, such as preventing Lachie Neale from winning a clearance when they played against the Lions. But unfortunately, you don’t get fantasy points for efforts like this. The change in role affected his fantasy scoring regardless.

After breaking out in 2016 with an average of 98.4, he went on to average scores of 102 and 107.3 over the next two seasons. He genuinely looked like he was going to be an elite scorer and many AFL Fantasy Classic coaches were picking him in their teams for 2019.

In a recent interview he hinted that he might be used in different roles this year, and a defensive forward role has been speculated by many. But if he did play up forward in this role, it would not equate to any decent fantasy scoring anyway.

I own him in our league and I’ll be throwing him back into the draft pool, but there’s a slight chance he may return to form with less pressure on him if you do wish to take the punt. I’d prefer to look elsewhere though.

Paton is a consistent and underrated Saint’s defender who flies under the radar while Coffield and Clark get all the hype. Whilst he probably won’t be as prominent from a fantasy perspective as these two, he plays his role perfectly for the Saints.

He played every game in 2020, and apart from an injury-affected score of 2, his lowest score of the season was 40 (50 BCV) which highlights his consistency. If you take that 2 point game out of the equation, he averaged 55 (69 BCV) which is fine for a player to fill your last defender spot or to offer cover on the bench. He also had two games of 72 points (90 BCV), and if he did this for you in a grand final, you’d be laughing.

He’ll fly under the radar in leagues but he has a lot of upsides. He’s only 22, consistent and looks to be firmly entrenched in St Kilda best 22. He also ranks highly in the marks, intercept marks and intercept possessions stat categories.

He’s a mid-range draft option in most leagues, but he should be a serviceable player for your keeper league teams.

I was shocked to learn that Nick Coffield was outside #2G4P qualification for 2021, but we think he’ll definitely get it this year.

I feel like I don’t need to justify this one too much. He plays a fantasy-relevant role across half-back, he’s the player St Kilda look to use on the switch and he’s tall enough to intercept as well ranking as an elite player for marks across the competition. He’ll also be a defender for life.

If he’s available in your draft, just get him.

Jack Higgins made the decision to go to St Kilda, despite them offering limited opportunities in the midfield.

This means he’s likely to play up forward for St Kilda which is also a position that St Kilda have an abundance of players for. These players include Josh Battle, Jarryn Geary, Jack Sinclair, Jack Lonie, Dan Butler, Jade Gresham, and Dean Kent just to name a few.

We all know that Higgins was a fantasy superstar at underage level, but after 41 games he hasn’t shown any signs of getting near that fantasy potential. Granted he had some health problems earlier but the role he’s been playing hasn’t allowed him to flourish from a fantasy perspective. If he’s to play up forward in a full-time capacity for St Kilda, we can’t see those fantasy numbers changing.

However, he may see a small bump in scoring. Richmond didn’t play a fantasy-friendly style and there’s still the possibility he may do stints in the midfield at St Kilda with the reduced rotations. So if he doesn’t get stuck as a crumbing / pressure forward, he could offer us something.

Don’t completely write him off, but I would be surprised if we saw a huge breakout in fantasy scoring this year.

Welcome back to the podcast Bradley!

Generally, when players move to a new club, you expect them to receive a little bump. Especially when they’re quality players like Brad Hill.

He struggled to fit in as there was a more competitive midfield at St Kilda than there was at Fremantle. The shortened games didn’t help him, as he is an elite endurance player meaning he couldn’t wear his opponent down and get off the leash. Changes to rotations this season should help, along with games going back to full length.

Whilst, I do think he’ll have more of an impact this year I wouldn’t be expecting an average of more than 85 AFL Fantasy points. He’s a genuine outside player and doesn’t have the inside game to boost his scoring as other midfielders do.

But if he’s a player rounding out your midfield line, he’s definitely going to be handy.