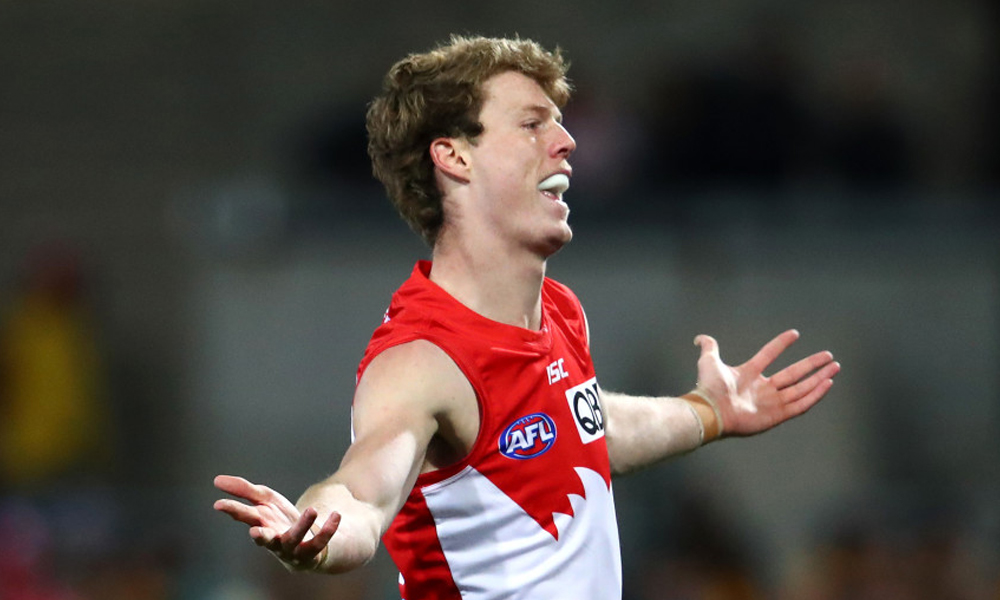 There is a lot of up-and-coming names at Sydney.

As super stars like Lance Frankling and Josh Kennedy bring their careers to a close, there’s a raft of younger players waiting in the wings for their opportunity.

Let’s hope some of those players are fantasy relevant, and more importantly, keeper league relevant.

I have decided that Nick Blakey will be making my keepers in 2021.

“Why?” you maky ask… well, I’ll get to that in a second. First, let’s go through his scoring history.

As you’re probably aware, he was recruited as a key forward but has never really played that role for Sydney. So far throughout his career, he has been used more as a third tall and has roamed Sydney’s forward line.

But in the later stages of 2020 it appeared to me that he was playing on wing, running up and down the field. But according to The Draft Doctors’ Draft Kit, from Round 12 onwards he accumulated 50 CBAs and balanced this with some nice outside footy.

From this point onwards he averaged a BCV score of 68, which doesn’t sound huge, but he was not conditioned to play in the midfield. With another preseason under the belt, I think he’ll boost his tank to spend more time on the ground and this should equate to better scoring.

The potential for increased midfield time and the fact he’s been training with the midfielders is the reason why I’m keeping him. There’s a lot of potential here.

Rowbottom is one of Kaes’ favorites who comes into his magical third year in 2021.

He improved on his 2019 season average of 63 to produce an average of 56 (70 BCV), which is what we look for when players come into their third year.

He showed hints of his scoring power in 2019, scoring above 80 on three separate occasions, and improved on that in 2020 scoring above 90 in three different games. However, he was a coach killer with some of his low scores falling in the BCV 50s last season. But we’re willing to cut him some slack, as we all know the second-year blues can be real.

The positive is he had a decent run in the midfield which shows that the Swans are keen to play him there long term. Also, he only averaged 77% time-on-ground in 2020, so there is scope for improvement there with increased fitness.

On the podcast this week, Kaes highlighted that he was on the same trajectory as Andrew Brayshaw coming into his third year, and will hopefully follow suit with his fantasy scoring this year. He’s also ahead of Brayshaw on The Breakout Tracker, which is a positive sign.

Hopefully, the breakout happens this season – he’s got plenty of talent and potential to become a quality fantasy scorer.

This guy was high in our 2019 Fantasy Draftee calculations and showed some good signs at underage level. He averaged 87 at the Under 18 Championships, and averaged 78.6 playing SANFL League, gaining ‘real man’ experience.

Stephens plays a fantasy-friendly role. He’s an outside midfielder but also can lay a tackle which shows he’s probably capable of some inside work later on down the track. He reminds us of a young Lachie Whitfield with the way he goes about it.

I’m a big fan of this kid, and I encourage fantasy coaches out there to get on board if he’s available in your league. However, I feel like he needs another year in the system before the breakout occurs, but I won’t be surprised if he goes okay this season too.

Hewett is an interesting cog in the Sydney midfield and a guy that many will have forgotten about. Younger players like James Rowbottom, Dylan Stephens, and Oliver Florent are getting all of the hype but Hewett was one of the Swans’ better players a couple of years ago. He finished runner up in Sydney’s best and fairest in 2019, averaging 75 AFL Fantasy points, registering three scores in the 90s and three scores of 100 points or more.

Before 2020, his durability was good. He didn’t miss a game between 2017 and 2019. However, he had a slow and injury-affected year in 2020 and didn’t play a game after round 7, suffering a season-ending injury to his back.

It will be interesting to see the makeup of the Sydney midfield this year but we think he’s a part of it. However, he does favor the handball when disposing of the footy, but he is a good tackler which should balance this out. He can score when he plays inside midfield roles and with the imminent end of Josh Kennedy’s career, it’ll be interesting to see if Hewett fills that void.

The single AAMI match will be telling to see how their midfield lines up this season, and hopefully Hewett is a big part of that.

We think Hewett is a decent middle-to-late round draft pick, and if fit he should round out your midfield nicely. He’s only 25 years old, so there’s still some upside there.

McInerny debuted in 2019, playing the single game and only registering one disposal. I thought he wasn’t up to AFL standard and we wouldn’t see much of him in the future, but to his credit, he worked hard to get into the best 22 at the start of 2020 and put together a decent season.

He mainly played on the wing and averaged 44 (55 BCV) AFL Fantasy points. However, he looked a little lost at the start of last season and was dropped from round 5.

He came back into the side later in the year and looked like a new man. He played the same role with a few added stints up forward (unfortunately, not enough to get forward status) and looked classy. He demonstrated great decision-making and used the ball well by foot; better than any of the other outside midfielders at Sydney. For these reasons, I think he’ll earn a more permanent spot in Sydney’s best 22 in 2021.

He averaged 55.6 (69.5 BCV) from his last five games of the season, which included a low score of 40 that dented the average. But it was obvious he was building as the season went on. He showed this with high scores of 64 points against Essendon (80 BCV) and 74 points (92.5 BCV) in the last game of the year against Geelong. That final game kept me wanting more.

I still think he needs another year of development to become an established scorer, but he looks like he can play. He’s definitely an outside midfielder type, so I can’t see him ever going huge, but could eventually fill one of your last midfield positions nicely.

Papley is one of the better small forwards in the game and had a solid 2020 from a fantasy perspective.

He averaged 58.2 (73 BCV), which was slightly down on his average of 75 from 2019. But to the naked eye, he seemed to add a few more strings to his bow last year. His scoring didn’t jump in 2021, but inaccuracy in front of goals really cost him, kicking 26 goals and a whopping 27 behinds. If he kicked straight he could have easily added five points per game to his season average.

He’s a high-time-on-ground player, having an average of 89% in 2020 so he gets a decent run on the ground. Another promising sign is he attended 33% of center bounces in the second half of 2020. These two stats are a good sign with the reduced rotations this year, meaning he could be used more in the midfield in 2021.

He seems like he’s been around for ages, but he’s only 24 so there’s still time for a breakout season. With the Swans showing signs of improvement this year, we wouldn’t be surprised if he pushed past the 80 average mark and became a decent forward option.

Whether you keep him or not depends on the state of your list, but if he’s available in a draft he’s worth chasing early on with the current scarcity of forwards.