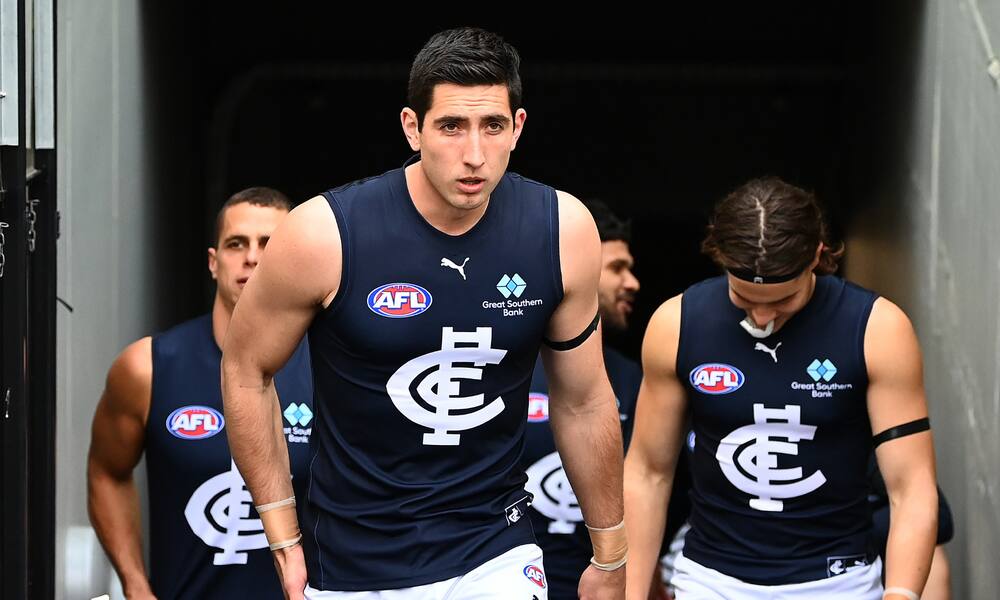 We’re up to the Blues! Let’s see if we can find a few players that will make worthy acquisitions to your keeper league teams in 2022.

Weitering had a career-best year in fantasy. He averaged 73.8 AFL Fantasy points and played every game for the season – a career first

As we all know, tall defenders aren’t everyone’s favourite for fantasy scoring, but he was a solid contributor last season.

He demonstrated some real scoring power in 2022, scoring more than 100 points on three separate occasions with a top score of 117. He also had two scores in the 90s, highlighting his ability to go big. On the flip side, he also showed he has a low floor with scores of 26 and 36 recorded last season. This will happen from time to time when he has to lock down opposition forwards.

He’s not the sexiest name in AFL Fantasy. In fact, he’s a player I thought would never be fieldable. But he proved me wrong last season and I don’t think an average of 70 points per game would be out of the question for Weitering.

He’s a decent option for your D5 position if you’re in need of one.

Welcome back to the podcast (#B2P)!

There was a lot of hype about Williams coming into 2021 after his move to Carlton from GWS. As a Giant, he always looked on the verge of greatness but had some setbacks in 2021 due to injury and role changes.

There was talk of more midfield time at Carlton but it didn’t come to fruition. He missed the start of the season through suspension but then played in the midfield until Round 8. He only put up a measly average of 66.8 until that point in the season and after Round 8, he didn’t record another CBA for the rest of the season.

He played the rest of the year in defence but only averaged 71.5 until getting injured late in the season.

However, I’m willing to give him another chance in 2022. Last season he was in and out due to injury and suspension, plus arriving at a new club can be difficult for some (especially when the side is struggling).

There’s a chance that Sam Docherty could miss a bit of footy this year, so that opens up a spot for him to play some fantasy-friendly football. Nic Newman will probably be the main point-getter in Carlton’s defence, but I wouldn’t be surprised if Williams gets back to an average around the 80 mark this season.

Hopefully, he slides in your drafts and you can pick him up cheaply.

Fogarty started well last year. He averaged 94 from his first three games and recorded a giant score of 120 points in Round 3.

Unfortunately, his scoring tapered for the remainder of the year, finishing with an average of 67.2 AFL Fantasy points.

He was another who was talked up for a potential midfield role at Carlton. Despite getting some opportunity and showing glimpses, he couldn’t lock down a permanent spot in the guts and was forced to play up forward before getting dropped in Round 17.

He went back to the VFL and played one game before the season shut down, scoring a monster 141 points.

Interestingly, he was recalled to the senior team for the final game of 2021, where he scored 83 points with a 41% share of the CBAs.

This late-season performance may have offered a glimmer of hope to some fantasy coaches, but with Cerra and Hewett coming in, I think he’ll find it even harder to find an opportunity in the midfield.

Also with Michael Voss taking over the reins at Carlton, a new coach means it’s hard to take anything out of the back end of 2021.

However, there is some potential here and he’s worth owning, considering he’s listed as a forward.

This is going to be interesting…

According to media reports, it sounds like George Hewett was recruited to play in the midfield at Carlton, which is where he spent the end of last year at Sydney.

At Sydney, he played in defence up until around Round 15 and then became a full-time midfielder from that point onwards. Looking at his season average, he went at 64 points per game. But from the time he started playing as a midfielder he averaged 78 with a last three-game average of 83.7. If you include Sydney’s final, his last three tally equates to an average of 98 after posting 106 points in Sydney’s elimination final loss to GWS.

George Hewett is someone you should recruit if you’re in the premiership window and need a defender. I can see him averaging over 80 points per game this season which would be a solid contribution to your defensive line.

The issue with Hewett is I can’t see him keeping defender status long term, and I also don’t see him as a high-scoring fantasy midfielder. So after one season of having a solid defender, you’ll be stuck with a dime-a-dozen midfielder.

Again, draft him if you’re in the window and need a defender, otherwise, avoid.

He was injured up until Round 9 but played every game from that point onwards. He averaged 60.5 last season with a top score of 91 AFL Fantasy points. De Koning also averaged 70 from his last 3 games, which is promising for a young ruckman.

I firmly believe he’s the future of Carlton’s ruck department and I think we’ll see a leap this year in both onfield performances and fantasy scoring. I don’t know how big that leap will be, but thinking long term, he’s a player to grab if you have an aging ruck or are planning for the future.

Keep in mind that you’ll need to handcuff Pittonet if you’re relying on him as your number one ruck.

He came into the side after scoring 159 in the first round of the VFL last season and played every game from that point onwards. He only averaged 56.6 last season but averaged 68 from his last 3 which shows he’s trending upwards.

Stocker was trusted with the kick-ins more often towards the end of the season, which we know are easy points. He took 14% of Carlton’s kick-ins throughout the season but bumped that up to 20% over the final three rounds of 2021.

The worry for Stocker and many other of Carlton’s fringe players is a new coach, so we’ll have to see what the plan is for Stocker.

I’m not expecting huge things from him in 2022, but I think he’s a good stash option. If he gets a full season worth of games in, we could see some improvement in fantasy scoring this season.

Support the podcast by becoming a member…