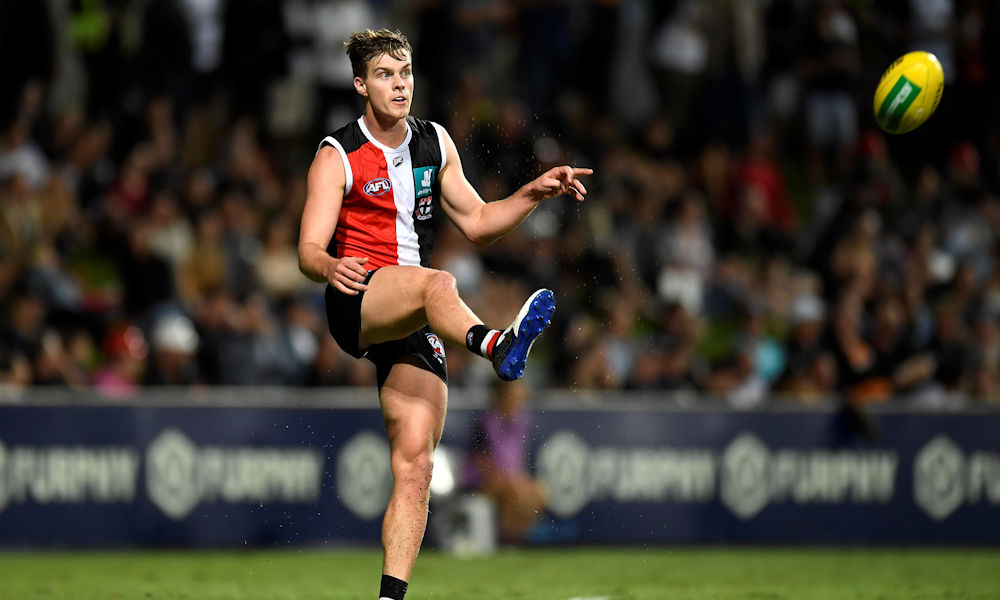 The Saints are on the rise and there are a number of underrated Fantasy options in their side. Let’s have a look at some of the better ones for this season.

Gresham gets B2P (Back to Pod) status after an injury effected 17 points in his third and final game of 2021.

It’s fair to say he was flying before he was struck down by an Achilles injury.

He didn’t have forward status last year but has been given it this year. I think coming back from an injury as severe as a snapped Achilles, probably means he does spend time up forward and retains forward status for next season as well.

When you look at the Saints midfield options with Steele, Crouch, Jones, Ross, Hannerbery, Byrnes, Higgins, Bytel and Clark – they are spoilt for choice.

Gresham is a classy player and still only 24 years of age. In his last proper (COVID and injury unaffected) season in 2019  he averaged 83.4 and an average like that is easy to see happening again this year.

He’s been a player we’ve been waiting on to see that boost in scoring and we got that glimpse last year. In time I think he can replicate what he did early on in 2021 as he’s always been a highly touted player.

I think he’s a great get if you’re starting up a keeper league as he’ll likely slide down peoples ranks plus he looks likely to hold forward status for a couple years.

Hill is a really interesting one for me and he goes from being mid only to back only this season.

It’s fair to say he hasn’t set the world on fire since crossing to the Saints, especially fantasy wise but as a defender, does he become quite relevant?

He averaged 71.2 last year and on that number he sits just outside the Top 50 defenders from last year.

Hill didn’t miss a game last year and picked up three tonnes. His issue was he had a few genuine stinkers. This included 4 games under 50 including a 6 disposal 24 point outing against North!

I have Hill firmly on a wing in the Saints best side. We know he’s a great outside player, the Saints play a lot of games at Marvel and he’s a hard worker. This can all equal good scores.

Possibly now he’s in a more settled Saints lineup in his 3rd year at the Club, could we see some Brad Hill of old?

I’d be more than happy to take a look at him as a D5 possibly D4.

One of the two big winners with the Nick Coffield injury is Tom Highmore.

The 23 year old is 193cm and a natural intercept defender. He played 12 games and averaged 61.2 in his debut season. Across the year he averaged 14 touches and 5.5 marks.

We saw Coffield play his best footy where he was be able to be that interceptor. With no Coffield around, it’s Highmore’s time to shine.

The Saints have an interesting backline. Coffield’s fantasy game was hurt by Jack Sinclair going back as that running, attacking type of player. They are different types of players but I like the fact that is should mean consistent footy for Highmore.

I think Highmore will play the third tall, interceptor role and I can easily see him average in the 70’s this year.

The other player who is likely to benefit from Coffield’s injury is Ben Paton.

He was tracking nicely before a badly broken leg in the pre season last year. He got back to training in August, so should be ready to go from Round 1.

Paton is more of a lockdown style defender but still more than capable fantasy wise.

Sinclair and Clark are more likely to be the free running defenders but Paton will still play a role. Think of Blake Hardwick of a few years ago.

I’m probably not has hot on him in 2022 as I was heading into 2021 due to the emergence of Sinclair in defence but I think a player like Paton will slide very late in a draft and is great bench cover with one of your later picks.

Byrnes had an eye catching year in 2021, with the young midfielder averaging 63 in 16 games.

In a side with a lot of midfield options, Byrnes didn’t miss a game after starting in Round 7 against the Hawks.

His best game of the season came against the Dogs where he registered 24 touches, 12 marks and 107 points.

I think it’s probably worth noting that Byrnes averaged around 15 touches last year and the three games where he cracked 70 points, he had over 7 marks in those games.

I’m a fan but for me, you can’t just rely on having those big mark games as a smaller midfielder to put up a score. He needs to find the footy a little more and also up those tackle numbers as he only had 4+ tackles on 2 occasions.

I think he’s trending nicely, heading into his 3rd year breakout year but even with that juicy forward status I still think he may be another year off really showing what he can do.

I love to say that anyone with C,F DPP is worth a punt and he definitely is, but if some coaches are a little bullish on him, I’d be more inclined to say that they can take him at this stage.

A pleasing end to 2021 has Snags Higgins back in my sights for this year.

After a slow start to the season, he averaged 76 from Round 11 onwards which probably shows me where his floor should be.

He had 116 points against the Swans in the infamous “Missy Higgins” match where he kicked 1.6 but he did also collect 23 touches that day too.

He backed it up the week after with a 103 points against the Crows and his scores didn’t drop below 50 for the rest of the season.

I’ve said it once and I’ll say it a million times more. I’m not sure why he went to the Saints with their glut of mid-forwards but he’s there and he seems to be working his way into good form.

He is still only 22, which is crazy and you have to think there is still upside to his game.

He played a lot higher up the ground towards the end of the season and if that continues this year, I think he’s going to be a hell of a lot better than his 69 average of last season.

Will he ever be the pig that people thought he might? Probably not, but he can be that 75-80 average forward who can pinch hit in the guts when required.

Wouldn’t hold him as a keeper but is worth a look early on in a redraft.