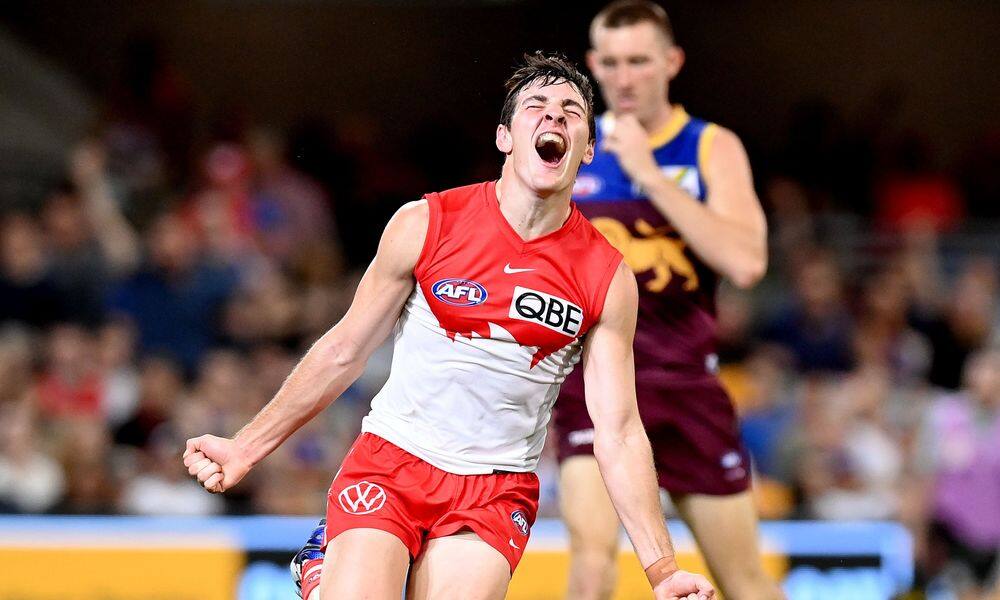 After years of not giving us much, Sydney now hosts a wealth of up-and-coming stars that are going to be very fantasy relevant in the near future. There are so many players I could have talked about, that I had trouble narrowing them down.

Whilst the internal competition for spots heats up, so does the number of potential fantasy points that can be scored by young guns in this team.

In this article, I’ll be taking a look at six names that I think could have a real impact this season.

This guy became one of ‘our boys’ last year.

After playing 9 games in 2020 for an average of 50.4 (63 BCV), there was something about this guy that caught my eye. He looked classy on the wing and was a good distributor of the ball, so I thought he might show something in 2022.

However, he didn’t give us the breakout third year I was expecting last season but he showed some very good signs.

He played 20 games last year for an average of 69.5 AFL Fantasy points. Across these 20 games, he put up three 100+ scores, and one other 90+ score. Whilst these higher numbers look good, he also had 12 games where he scored under 70 points, so it’s fair to say his good scores were few and far between.

Diving deeper into his role in 2021, he began on a wing and transitioned into a half-back role later in the year. This seemed to coincide with Jordan Dawson’s move to the wing in the later parts of the season. Of his four scores above 90 in 2021, only one of them came playing solely as a half-back flanker, the rest were either from playing in the guts (he attended 57% of the CBAs in round 20 for a score of 101) or playing on the wing. His only big score playing as a half-back flanker was in round 23 against the Gold Coast Suns.

So there is some cause for concern when it comes to McInerney’s role and how that translates to fantasy scoring. However, he does look like a fantasy type and Jordan Dawson’s departure does leave a hole (either on the wing or on the half-back flank) and I expect McInerney to fill one of them and see a scoring bump as a result.

For owners and people intending to draft him, let’s hope this is on the wing to maximise his scoring power.

Gulden had a rapid rise to fantasy fame in 2021.

After being selected with pick 32, he was touted as one of the best rookie fantasy prospects of the 2020 draft class averaging 106.7 in the NAB League as a bottom ager. The only players that averaged more than him were Luke Edwards and Tom Powell, who played in the SANFL U18s and were able to actually play in their draft year.

He blew fantasy coaches away from the onset, scoring 108 on debut, and backed it up with scores of 93 and 98 in the following weeks. His scoring dipped over the next few rounds before Sydney announced he had a stress reaction in his foot and would miss an extended period of football.

He was out injured until round 15, where he played every game for the rest of the season. His time-on-ground was reduced upon his return, but he still managed to put up some decent scores from time to time. He had two 100+ scores in the back end of the season and was selected in Sydney’s elimination finals side to play against GWS, which shows he was in the best 22 even if he wasn’t at 100% fitness.

In terms of role, Gulden spent a lot of time up forward in 2021. He kicked a goal in each of his last 5 games in 2021 proving that he was serviceable in that role. He was given forward status in 2022 as a result.

However, as a junior, he played primarily on a wing in the NAB League and shined in this position showing good football IQ and athleticism. As we all know, Jordan Dawson has left the Swans which leaves one of the wings vacant.

Could Gulden move into this role and become a gun fantasy scorer? Only time will tell.

Regardless of role, I’m confident Errol Gulden will be a fantasy star of the future so be sure to snap him up early in your start-up keeper league drafts this year.

Brayden Campbell had a fantastic start to his AFL career before injury interrupted his season.

Whilst he only averaged 52.5 from 9 games, he showed some promising signs. He played from round 1 and looked comfortable at AFL level. In round 2, he showed us what he could do from a fantasy perspective scoring 96 AFL Fantasy points playing out of defence. In this game, he had 21 kicks, 4 handballs, 6 marks and 2 tackles.

An interesting stat about Campbell is he was trusted with some kick-ins in the early games of 2021. In previous years, Jake Lloyd had a monopoly on kick-ins at Sydney, so it was positive to see a youngster like Campbell trusted with this responsibility. This could lead to some good fantasy scoring down the track.

He played every game up until round 6 before suffering a stress fracture in his shin. He then missed the next 16 weeks of football.

He returned to the senior side in round 23, and whilst he didn’t set the world on fire from a fantasy perspective, it was positive to see him playing in a side preparing for finals football.

There’s still some debate about how Sydney will line up this year. I’m not sure if McInerney remains on the half-back flank or moves up to the wing to replace Jordan Dawson. If he does move back to the wing, this opens up a big opportunity for Campbell to produce some good fantasy scores.

As a top-end talent who was drafted at pick number 5 in the 2020 draft, I’m watching with interest.

I think Nick Blakey is going to make my keepers AGAIN this season.

Last year, I was very high on Nick Blakey as he was listed as a forward and tipped to play on a wing.

Naturally, I thought this would lead to an uptick in fantasy scoring, but despite getting the exact role we were hoping for he could not improve his fantasy game. In fact, he just looked lost on the wing and was dropped to the seconds by Round 11.

“Why are you going to keep him then?” You may ask…

Well, the second half of his season tells a very different story from the first.

After being dropped to the VFL, he returned to the seniors playing on a half-back flank which resulted in him picking up DEF status this season. Playing in this position, he didn’t put up a score below 63 and averaged 71 points from his last 7 games. Adding to this, he had two games throughout this period with low time-on-ground due to sustaining injuries and coming off the ground. In one game, he spent more than a quarter off the field before returning. In the final game of the year, he cracked his fibular after putting up 68 points from just 58% time-on-ground. So if you take out injury affected scores, his average to end the season should have been higher.

When Blakey played across half-back he looked comfortable in this position. There were some great examples of gut running that allowed him to link up between contests and deliver the ball inside fifty. His height is also an asset allowing him to take an intercept mark.

The issue is if there’s a permanent spot in there. He seemingly swapped spots with Dawson at the end of last season who has since left the club. But we expect younger players like Brayden Campbell to feature more this season who could squeeze him out. Justin McInerney has also been tipped to play in defence this season, and there is of course Jake Lloyd who is a fantasy machine. So I’m not sure where the fantasy points are going to come from even if he does get the role.

Despite all this, I think he’s a high risk/high reward type selection and should make a decent fifth defender in your starting line-ups this season.

Ladhams moved to Sydney this season where many expect him to take over as the number one ruck.

Last year, Ladhams was mostly used up forward, chopping out for Scott Lycett when he moved to the bench. However, there was a period last year where Scott Lycett was out suspended and Ladhams really showed us what he can do from a fantasy perspective.

So, the point I’m trying to make is if Ladhams can be the number one ruckman at Sydney he should be a decent fantasy option.

However, the big question is will he get the number one role?

The man who stands in his way is Tom Hickey. Absolutely no one would have seen the impact Hickey was going to have on Sydney last season, but he was so effective at the stoppages that I don’t think Sydney would want to change this too much. They trialled different players like Joel Amartey and Hayden McClean as ruck/forward options but remained with Hickey as their number one option. This gives me the impression that Ladhams may also play a ruck/forward role at Sydney this season which probably won’t be the best outcome for his fantasy game.

However, I think he finds himself in good stead for the future. Tom Hickey will be 31 at the start of this season and rarely plays every game of the year, so I think Ladhams will get opportunities. I also think he’ll be the number one option after Hickey retires.

Ladhams has forward status this season and should hold onto it until he transitions into a full-time ruckman, which should be in the next couple of years.

Enjoy that forward status while it lasts.

After being taken at pick number 5 in the 2019 draft, Dylan Stephens looked like a good fantasy prospect.

As an outside player, he found it tough to crack into the side with young guns like Errol Gulden and Chad Warner coming into the side. Also, the fitness of James Rowbottom did him no favours, and the transition to full-time midfielders by George Hewett and Jordan Dawson hindered his opportunities. There simply wasn’t a spot for him in Sydney’s midfield.

When he did play, he was either used as the sub or he just looked out of sorts. He played 6 games (many of which were sub-affected) for an average of 36.8. His best score of the year was 63 in Round 7 against Geelong, but this was his only score above 50 last season.

Looking ahead to the 2022 season, he’s reported to be having a good pre-season where he’s put on a considerable amount of size. Coach John Longmire has been impressed with his intensity and in Dylan’s own words, he’s been trying to add more strings to his bow by working on his inside game so he can play a greater variety of roles.

Whilst I think he’s another year or two away from being a regular starter, he showed so much potential in his first year it makes him a player who we shouldn’t ignore.

Given that he’s apparently ‘training the house down,’ he’s one we need to monitor over the pre-season.