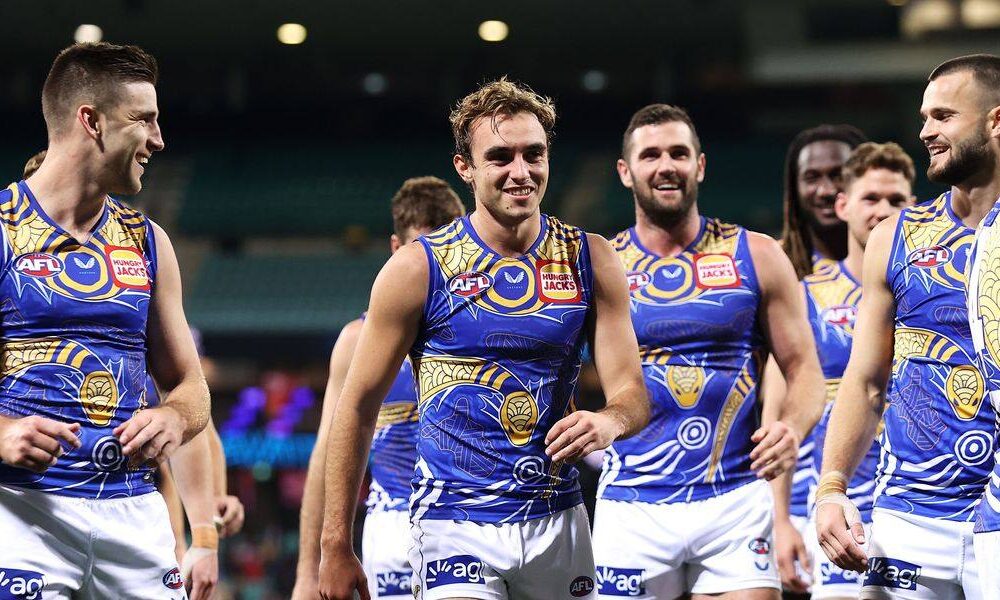 The Eagles are holding on for dear life. Are they still in the window or are they a certainty to be in rebuild mode shortly?

There is still plenty of top end talent at the Club but with injury niggles, age and vaccination hesitancy hanging over some of these stars – will we see more juniors get a chance to shine in 2022?

I’ll have a look at some of the players on the up in the Eagles side.

Will Liam Duggan be the big winner of Brad Sheppard’s retirement?

Last year Duggan averaged 78.5 in an injury-interrupted season. There was talk of more midfield time last season and while that never really eventuated some big scores off half-back did.

Duggan was averaging 96.2 after Round 5, which included a 148 point outing against the Pies. He played a couple more games before injury struck, then returned, only to miss the end of the season with a knee niggle.

That niggle has continued throughout the pre-season which I’m not going to lie, does worry me.

Word is he’s now back in full training but I never like to get too excited about guys who don’t have a decent pre-season under their belt.

Long term the prognosis is much better. With Hurn surely in his final year and with no Sheppard around, there will be a few possessions to pick up off half-back.

Yes, Alex Witherden is around but there is no reason why these two can’t co-exist happily.

I think he can get close to a premium defender status but he just needs some luck with injuries. He’s 25 years old, so I think there is still upside. He possibly slides a bit this year in a startup league based on his delayed pre-season but is one to target in a trade later in the year when he gets back to his best.

I’m incredibly intrigued to find out what 2022 has in store for SPS.

He arrived at the Blues with a heap of hype and never really delivered but in my opinion, he was never really given the chance to shine.

He’s an interesting pick up for the Eagles as I’m just not sure if he plays. And if he does play, who knows what role he’ll get. He’s a genuine risk versus reward pick and some coaches may be happy to roll the dice early. I’d maybe roll the dice late but I can’t really visualize where he plays at the Eagles. Maybe a wing? As their half-back line looks stacked with guys like Duggan, Witherden and Rotham.

At the end of the day he’s only 23 so someone will definitely throw him a line in your draft. He might be worth a look late.

(This was written before finding out about his foot injury)

Allen is a player who probably hasn’t popped like we thought he would after a solid start to his career but with Jack Darling currently jabless, a lot more responsibility should rest on big Oscar’s shoulders.

Allen played 21 games last year for only an average of 58 which was a drop from his 70 BCV average the year before.

He kicked off 2021 with a 96 point outing against the Suns and unfortunately that was his peak. It got pretty bleak for owners as he ended the year with 9 games under 50.

He’s a Forward only this year which is not surprising seeing as he only had 31 hit outs last year. He was thrown around a bit at times last year and ended the year with 28 goals, only kicking two in his last six games.

Allen is only 22 but it feels like he’s been around much longer. As he enters his 5th year in the system, it’s time to show something. With a big cloud over Darling, Josh Kennedy getting mighty old and Jarrod Brander now at GWS, it’s time for Allen to shine.

Always been quite naturally talented and looks a likely type but my worry is the Eagles may be on the slide which could make things that little bit tougher for a young key forward.

If he looks like this foot injury won’t keep him out too long, I would roll the dice on him late.

The long-haired, mid-season draftee played 3 WAFL games in 2021 averaging 27 disposals and six tackles a game for an average of 106.9 AFL Fantasy points. He got the call up to the big leagues and played 5 AFL games and averaged 50.8.

He had 19 touches and 76 points in an eye-catching debut against the Crows.

West has been granted forward status this year which is very handy. We know he’s a top-level WAFL midfielder but we’re obviously yet to see really what he can do at AFL level.

The Eagles midfield depth chart really intrigues me. Guys like O’Neill and Foley have been on their list for a few years. Luke Edwards was added last year and now they’ve added a mature-ager on their list in Greg Clark.

All reports are that West has had a cracking pre-season but where does he actually sit in the pecking order. My gut feel says that the new recruit Clark goes ahead of West from the start but that’s pure speculation.

I think West is worth a late flyer based purely on some intra-club form and forward status.

We haven’t seen Willie since 2019 when he finished the season with a 63.8 average. He’s now had 2 years out of the game and it’s going to be very interesting to see how he comes back. He seemed to be on a bit of an upward trajectory before his issues but how seamless will his return to the AFL be?

Firstly, I want to say that I believe he’s in their best 22 if fit and ready to go this year, especially with the news that Jamie Cripps will miss a big chunk of footy this year.

From a fantasy perspective, yes he’s a small forward which isn’t always conducive to great fantasy scores but from what we’ve seen in the past, he can be a great streaming option.

Rioli is a player I’m very keen to see in the pre-season. I’m not tipping a full-scale breakout, but he is someone I’m interested in as a late flyer who may be a game-winner on his day with forward status.

My Manscaped ‘smooth ball call’ is that Luke Edwards will play 18+ games this year.

He showed some glimpses of genuine class at AFL level last year in his 7 games. He had 27 touches and 90 points against the Tigers last year and ended the season with a 52.7 average.

Edwards looks like one of those players who isn’t super quick but has enough polish for it to not matter.

He had a few quieter games which is to be expected as a rookie but picked up a niggle after he played the Crows in R18 where he scored 76. After that he was either missing or a bit off the boil.

I’m liking his opportunity for consistent time in the midfield. With Shuey and Redden injured, there are a few spots up for grabs in the engine room. Yes, they still have some quality in Sheed, Yeo, Kelly and Gaff but they need to keep rejuvenating that midfield.

Definitely worth a look late in drafts. if you can stash him I think he’ll be a great player who will keep building and we’ll see the best of him in 2023.