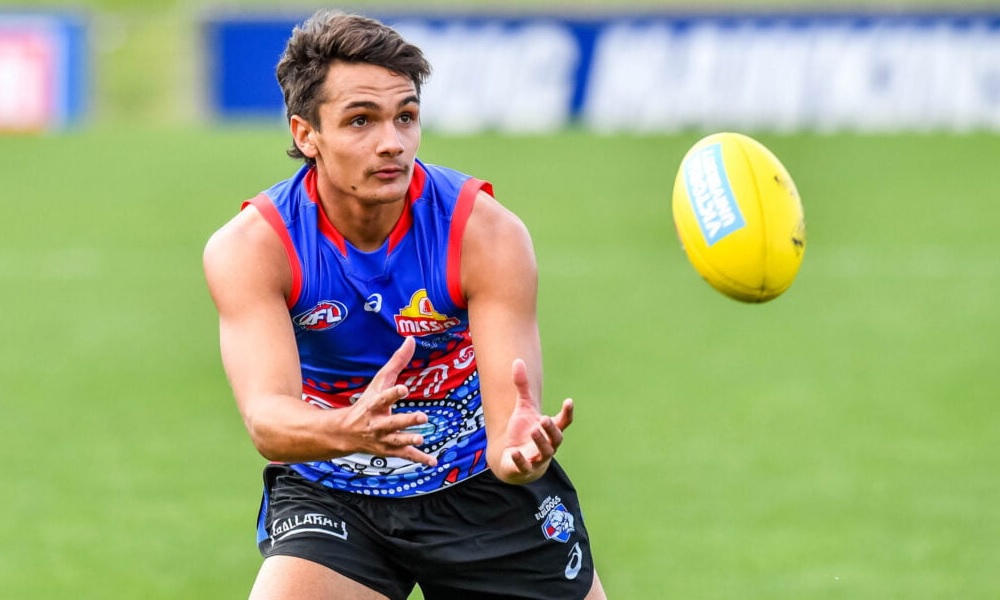 Falling short of the ultimate in 2021, the Western Bulldogs still boast a plethora of stars with a good mix of young talent, providing some nice options for our AFL Fantasy keeper leagues in 2022.

The Doggies established top-end talent means we need to dig a little deeper to find the gems at the Kennel, but let’s look at the next wave of options that could make a difference for your side this season!

Let’s take a look at my favourite six players from the Western Bulldogs to consider in your AFL Fantasy keeper league drafts in 2022.

A long-time favourite of yours truly, I’d be neglecting my duty to one of my boys if I left him off this list of AFL Fantasy keeper league options.

Unfortunately, the emergence of a secondary Bailey in defence last season – Bailey Dale – ruined what could have been a true fantasy breakout for the superior Bailey. However, with a permanent home on Dossy’s double-decker bus, I still hold out hope that Bailey The Bulldog has the potential to be a long-term defender option in our keeper leagues.

Bailey The Bulldog by Uncle Dos!

**some illustrations may traumatize children.

Having already averaged 80 AFL Fantasy points back in 2018, still just 24-years-old, BW is only now entering his prime, and – after finally establishing himself in Bevo’s best 22 – can focus solely on taking his game to new heights in 2022.

Recording 20-plus disposals in nine of 13 games in his breakout 2018 season, Bailey only cracked that barrier four times across 19 games last season – an area he should improve following a full season in the role.

He also averaged +7 points better in games without Easton Wood in 2021, and could the addition of O’Brien actually free up our beloved Bails to roam free?

Williams is a joy to watch when he’s on. He’s one of the best candy sellers this side of Hunter Clark, he has the ability to twist and shimmy through traffic like a midfielder (because he is a midfielder, Bevo) and has a booming peg when given a few inches of space.

At the end of the day, there might not be enough Sherrin to go around for Bailey to feast at the Bulldogs, but I’m a BAILiever for season 2022.

AND HE HAD 56 DISPOSALS FOR GLENELG UNDER 18s IN 2015 AND YOU MUST DAMN WELL RESPECT HIM!

There’s no question Aaron Naughton is a budding superstar of the competition – and already a bonified key forward stud for the Dogs.

The question for fantasy coaches is whether he can take his game to go beyond simply a forward streamer, to a safe, weekly option in 2022.

The 22-year-old was enjoying a huge season, averaging 14 disposals, eight marks, two goals and 82 AFL Fantasy points up until round 12. After the Dogs bye in round 13, Naughton suffered a rib injury in round 14 followed by a concussion in round 16, and averaged just eight disposals, four marks, one goal, and 46 AFL Fantasy points for the remainder of the season.

Later in this horrid run, Naughton had to adjust to life without Josh Bruce, who went down with a torn ACL in round 21.

In the six games without Bruce – which includes all the Dogs finals – Naughton averaged 57 AFL Fantasy points; -17 points worse than his seasonal average.

A young and immensely talented key forward, Naughton enters 2022 as the Dogs top avenue to goals, in a team that finished fourth for inside 50s by average last season.

Aaron will have plenty of opportunities to put up some Naughty fantasy scores for you this year – especially against cushy matchups – and with thin forward stocks this season, he should fit nicely in your F3-4 slot.

There’s a juicy role in the Bulldogs backline primed for the taking.

Easton “Heff’s Pythons” Woods has retired, and while by no means will his role push either of these contenders into stardom, it should be filled by one of Josh Schache or Tim O’Brien.

Schache was moved into defence late last season in a last ditched Liam Jones-esque attempt to save the former number one picks career.

The former number two draft pick found some success in his new role – particularly in his first game, where he popped a cheeky 85 AFL Fantasy points for coaches willing to take a streaming punt following the change-up.

Unfortunately, the change didn’t help him for long, putting up 50’s in the proceeding two games, before largely playing as a forward in the Bulldogs finals series.

The retirement of Wood brought some hope that Schache would emerge as a late flyer in drafts heading into 2022, particularly after retaining forward status. However, the arrival of Tim O’Brien may be an issue.

O’Brien had a similar success story with a shift to defence in the latter part of his career with the Hawks, before finding his new home at the Kennel this trade period.

O’Brien came into his own playing purely as an intercept defender late in 2021, averaging 19 disposals, nine marks and 84 AFL Fantasy points over his final three games.

A recent interview with Caleb Daniel suggests that O’Brien is the frontrunner for the role with his strong performances in match simulation at training.

Given this vote of confidence, and the fact he’s a few years older with a bit more experience as a swingman at AFL level – O’Brien gets the edge as a late-round flyer this draft season with the handy DEF/FWD status next to his name.

Ever wondered what a key forward would look like if they stood at 178cm tall? Introducing, third-year breakout contender, Cody Weightman.

Playing 13 games in his sophomore season, Weightman had an immediate impact on the Bulldogs forward-line dynamic the moment he broke into the 22.

Entering the side in round 9, he kicked three snags to open his 2021 campaign – and went full Bunnings for the rest of the season – producing snags in every game he played bar one for the remainder of the season.

Playing like a key forward has its drawbacks. Weightman’s highest disposal tally was 14 – relying on his strong lead-up marking for most of his disposals, while his tackle numbers are underwhelming for a typical small-to-medium forward.

Realistically, he’s probably more of a stash option but could surprise us this year with some big scores and I have no doubt he’ll be a streamer at the very least.

Another Dog that will need to step up in the absence of Bruce, Jamarra Ugle-Hagan has spent the off-season training with The Bont, and appears driven to put 2021 behind him.

The first overall pick of the 2020 AFL Draft, Jamarra Ugle-Hagan should push for a regular spot in the 22 in his second season, and will never get the oppositions best defender, so long as Naughton is in the side.

Despite being the dreaded fantasy key forward, Ugle-Hagan has plenty of upside from year one to two. In his five games in 2021, he only spend 69% time on ground – a super low figure for a key forward – while he also has plenty of marking upside.

While he had five marks on two occasions (and good points per minute in those games), the other three games consisted of 1-2-1 in the mark column – again, numbers that have plenty of room for growth for a key position player.

Don’t expect too much of the 19-year-old in 2022 in AFL Fantasy, but if you’re in a dynasty league, a deep keeper, or have a rookie list setup in your league – consider Ugle-Hagan as a potential long-term project.

While the memory of Scott may linger for some coaches, I’m certainly eager to see how West 2.0 fares at AFL level.

It’s been a tough gig thus far for the 21-year-old, who’s managed just eight games across his first three seasons since being drafted in 2018. The Dogs stacked midfield is a nightmare to break into, especially since West’s best role is on the inside.

Only managing two games for the top team in 2021, he was popped in a forward pocket in one game and started as the sub in the other. It’s for this reason that he’s rocking a despicable… 14.5 AFL Fantasy average on our draft boards.

Even with FWD/MID status for our drafts this year, West is still most likely of a waiver watch in case one of the midfielders ahead of him goes down. However, with Patrick Lipinski now in a black and white guernsey, Mitch Wallis seemingly out of favour, Toby McLean coming back from an ACL, and Lin Jong retired – the Dogs midfield depth may be tested in 2022.

If this call pays off, I’ll be busting out a Manscaped Bald Nut Strut at seasons end. Stay tuned.