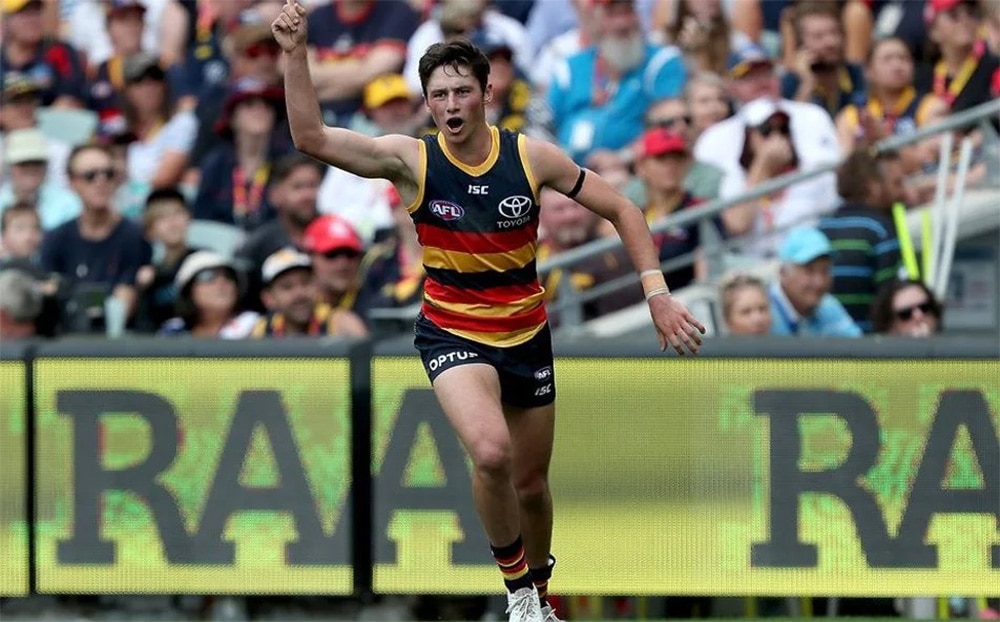 Over the next few weeks on the podcast, we will analyse every team in order to find some keeper league players worthy of being drafted in your leagues. In this article, we’ll take a look at who we’ve discovered from Adelaide.

In just his second season of AFL football, Tom Doedee missed most of 2019 with an ACL knee injury.

He notched up 38 points from 27% TOG in that round 1 game before it happened.

He seemed to be building nicely before injury struck, so who knows what 2019 could have been.

The intercept game is key to Doedee’s scoring and will get the chance to straight back to that role with Alex Keath’s departure.

In regards to his place in the side, Talia, Hartigan, Kelly, Brown look to be the main lockdown defenders leaving Doedee to play as the tall interceptor.

There is always some risk with players returning from an ACL, but he’s a defender with upside.

This kid could be the biggest name at the Crows one day.

Chayce Jones played 8 games last season for a 46 average, but it was the 97 in the last game versus Western Bulldogs that attracted our attention. This came from only 72% TOG too.

Looking at his state league numbers, he had a solid year in the SANFL. He played 12 games for an average of 75, with two 100 plus scores and two scores in the 90s.

However, also had some quiet games with some low scores throughout the year.

He only averaged the 17 touches per game in the SANFL, but did rack up over 4 tackles a game. This will be a key factor in his role this year, as well as his scoring ability.

There’s lots of talk in media circles that he’ll be getting a lot of midfield time in 2020, and so you think he should play every week.

Kaes copped a bit of criticism for slotting him into his best 22, but he genuinely believes there is a spot for him.

There were a number of outs at the Crows last year which could provide an opportunity for Keays. However, Chayce Jones and Ned McHendry should be locked for coming into the side.

But Kaes believes Keays is around the same level as those guys. He also believes he can do a few extra things the others can’t (despite not listing what those things actually are).

In 2019, Keays never got a crack at it at AFL level with the Lions side running so hot, so he plied his trade in the NEAFL. There he averaged 96 points, running at 20 disposals, 5 marks, 3 tackles and 3 goals per game.

He also had 8 scores over 100 in the NEAFL, with a top score of 135 points as well as kicking 4 goals and scoring 125 AFL Fantasy points in the NEAFL Grand Final.

As a forward who can pinch-hit in the middle, he gets a tick from Kaes. Heff is not so keen.

Ned McHenry didn’t play a senior game in 2019, despite being a first-round draft pick.

Seeing though there are no AFL numbers to go by, we’ll have to take a look at his SANFL data.

Among these 10 games came monster score against Central Districts in round 5. In this game, he amassed 139 AFL Fantasy points. He had 11 tackles in this game, which shows his tackling prowess. Over the 2019 SANFL season, he averaged 5 tackles per game.

Looking at his junior numbers, he was described as one of the better fantasy performers from the 2018 draft class.

In the Under 18 Championships, he averaged 86 points per game (which equates to 103 when adjusted for the shorter game times).

In the NAB League, he went at 84 points per game, which doesn’t quite match some of the better performers of that year. However, he did average 115 Supercoach points per game.

With the Crows looking to promote youth in 2020, he should be on our keeper league radars.

Towards the end of the season, it became evident the Crows were looking to utilize speed in their failed attempt at making finals. Seedsman played a big part in this.

He played a number of roles in 2019, averaging 72.8 points per game. However, when he was moved to a wing in the latter stages of the year, his scoring improved dramatically.

In his last three games, he averaged 96 to go along with an average of 90 from his last five. These numbers were obviously dependent on the role change late in the season, and it is unclear what his role will be under a new coach. If it can continue, he should be a viable scorer in 2020.

At only 28 years of age, he’s still in the prime of his AFL career and should still have a few good years left ahead of him.

If things go to plan, I wouldn’t be surprised if Seedsman bounced back to an average around the 80 mark and become a handy player for one of your last midfield spots.

This guy is a SANFL gun.

He averaged 114 in the reserves last year, going at 26 disposals per game. In his 20 games, he racked up some monster scores, with a 165 in round 11 versus Sturt and a 159 in round 18 against South Adelaide

Despite this state league dominance, he only played one game of AFL footy last season. And it was abysmal (fantasy-wise). Despite getting a start in Adelaide’s midfield and playing his natural position, he could only muster 59 points. The positive is this came from very little time on the ground.

Going into 2020, there’s no certainty to play even with Cam Ellis-Yolmen and Hugh Greenwood leaving. I believe the Crows will opt for youth and blood some younger players. Wilson is 25 years old, so I’m not sure he fits this category.

The one positive is he signed a new contract last season, meaning he must be part of the Crows future plans. That was under Don Pyke though and it is still unclear what Matty Nicks has in store.

He’s one of those players who might shine if he were given a consistent opportunity and time to develop at senior level. Unfortunately, I don’t see that happening.

Given his scoring power, he’s probably worth a late pick in case he earns a spot. If there’s talk of him playing early, then jump on board.