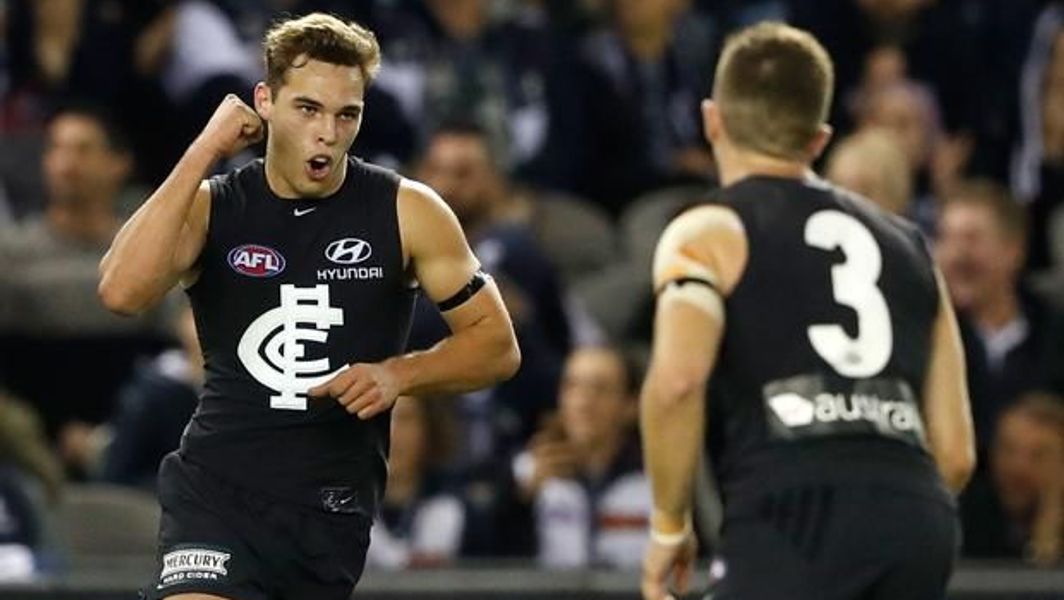 Next up on the list is the Carlton Blues. In this article, we’ll dissect their list and try to find some draft-worthy players for our keeper leagues.

Newnes is an interesting one.

However, during the past two seasons, Jack got screwed around at the Saints, playing a number of different roles and basically became a high 60 average forward flanker.

The Blues were obviously keen to take him as a Free Agent and at 26 years old, this is ‘do or die’ time for Newnes.

One of the positives with Newnes is that he doesn’t really get injured. He’s played 108 games in the past 5 seasons. He also loves the outside ball and kicking more than handballing.

On the downside, his role at the Blues is currently unknown and there are lots of players at Carlton that play similar roles.

There’s a chance that he plays as a midfielder, but it may not be great for his scoring.

His selection is risky, and definitely one for the brave.

Here’s a guy who never gets many plaudits, but had the 12th highest average at Carlton last season.

In 2019, Cunningham averaged 66 from 9 games, which doesn’t seem like much. But when you look a bit closer, you’ll see he had 5 games above 75 points. He also had a 30 to finish off the year which dented his average.

He played predominantly as a half-forward flanker but did have stints in the midfield too.

We thought he was building into his fourth season of AFL nicely before injury struck. He looked like he was improving rapidly.

His two games at VFL level last season don’t give us much extra to get excited about, but we still like how he performed in the seniors.

Obviously there is a plethora of your similar type at the Blues, but we think he’s a bit sleeper. Especially when players like Stocker, Dows, Kennedy etc will be getting more attention.

Harry McKay has some of the best hands in the game (he had four games last season where he took over 10 marks) and could well be a future star of the competition.

Looking at his average, 61.5 points per game is a bit underwhelming, but on his day he can be an absolute assassin. For example, against the Western Bulldogs in round 5 he had 128 points. But two weeks later against the Kangaroos he scored a measly 3 points – not ideal. But with young key forwards these Jeckyl and Hyde performances are to be expected.

Unfortunately, groin issues have hampered his pre-season and he has only started running this week. This is a little concerning. If he’d had a full pre-season Kaes would be going all in, especially with Charlie Curnow under an injury cloud.

Kaes thinks he’s probably worth one of your last keeper spots depending on the state of your list and the depth of your squad. But monitor how Mitch McGovern and Levi Casboult are tracking, as they will affect his scoring.

Liam Stocker gains back status this year. This may intrigue some coaches given how highly Carlton rate Stocker, and what they gave up in the 2018 draft to get him.

But let’s take a closer look.

Stocker played 5 games last year for an average of 45. It was pretty obvious Carlton just wanted to get games into him, despite looking a little underdone and undersized at AFL level.

To assess whether he has any scoring potential, I decided to dig up his underage numbers to see if there was any fantasy potential there.

In 2018, Stocker averaged 82 AFL Fantasy points and 100 Supercoach points in the NAB League. He was not selected to play in the Under 18 Championships, so we’re unable to gain any information from that.

Looking to his VFL numbers, he only averaged 69 points per game at that level. And he only managed a score above 80 twice in his 9 games.

In my eyes, I just can’t see him as a fantasy scorer. Not in classic scoring formats. Well, not yet anyway. He may offer some value in Supercoach but not for some time.

Jack Silvagni is quite frustrating to watch (and to own) due to his inconsistencies. However, he does have some freakish skills.

He was one of Carlton’s most improved players last year and managed a career-high average of 66 AFL Fantasy points per game.

If you look solely at his last 10 games, he averaged 69 points in those outings. In my opinion, if you can get your fourth or fifth forward to average above 70, you’re doing well. So this makes him an intriguing proposition for next year, especially if he can improve on this season.

While we’re talking about late-season form, he did have a run of 7 games where he scored above 70 (Rounds 15 to 21)

He seems to be a genuine utility who can play forward and back, but even had stints in the midfield last season.

If he continues on his current trajectory, consider him for one of your last forward spots in 2020.

Fisher only averaged 63 AFL Fantasy points per game last season, after averaging 69.5 the year before.

This is disappointing because he started the year like a house on fire. After round 5 in 2019, he was averaging 81.6 and looked like a genuine breakout contender.

But from there, he moved into a mid-forward role and only averaged 53 from his last 10 games.

The big question is whether Fisher sees more midfield time again in 2020. Obviously Cripps, Murphy and Walsh are all ahead of him, but he should be on that next tier.

Another question is how does the arrival of Jack Martin affect his scoring this season too? Does Martin push him out of the side? Or does he take over that mid-forward role, pushing Fisher back into the midfield?