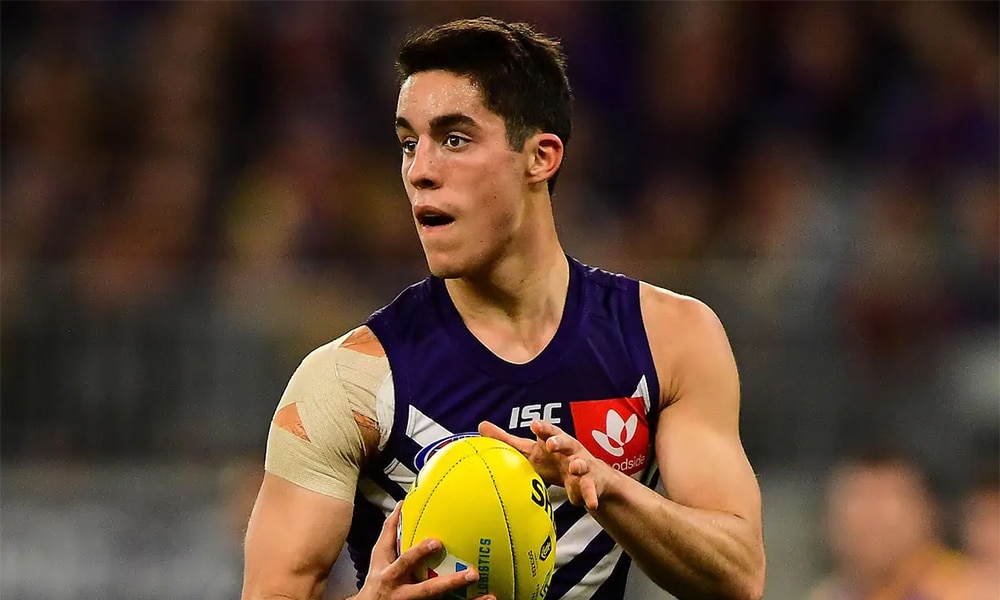 Next up in the analysis series is Fremantle. Check out some of the players we identified on our podcast who we think could play roles in our keeper league teams in 2020.

Take a listen to our latest podcast: Pre-season 2020: Collingwood, Essendon and Fremantle.

Duman had a solid third year in the AFL system, averaging 66 points per game out of the Fremantle backline.

He popped up on our radars at the end of 2018 after a great finish to the season from a fantasy perspective. This included a 118 point game in round 23 of the 2018 season.

Duman’s intercept marking is a real strength of his as demonstrated by his 10 marks taken against Port Adelaide in round 23.

Looking at his WAFL numbers from 2019, he played two games and scored 73 and 114 in those outings. In terms of averages, he had 22 disposals and 8 marks per game. In a league where scoring doesn’t come easy, this gives us an indication that there’s some potential there.

We feel like he’s a player that will benefit from a new coach, and should see some general development coming into his fourth year in an AFL system.

If he keeps tracking like this, he should take a leap in 2020 so monitor him closely.

Bailey Banfield is a guy who was unlucky over the past few years under Ross Lyon.

He had the third-highest average of every player in the WAFL last year, averaging 114 AFL Fantasy points per game.

Looking at stats he averaged 17 kicks, 9 handballs and 7 tackles per game at this level.

What hurts him the most was his obvious role change at AFL Level, often being used as a tagger. He played 7 games in the seniors, averaging a measly 55 points per game. His top score for the year was a 79 in round 1 against North Melbourne and this was the only time he had over 20 disposals in a game.

2020 will be his third year in the AFL system and hopefully, a new coach provides more opportunities for him.

He has been talked up by many as someone who will feature strongly this season, with multiple players departing from the Fremantle midfield.

Monitor closely and let’s hope he gets his chance.

Aish has been unlucky with both injury and form over the past few years and has only played 30 games in three seasons as a result.

This year he moves to Fremantle, where Kaes expects him to take up a spot on the wing with Hill and Langdon leaving.

Apparently Justin Longmuir loves him from his days as an assistant coach at Collingwood, so this should bode well for gaining opportunities at Fremantle.

In terms of recent form, he played 13 games last season, going at an average of 67 points per game. Of these 13 games, he scored over 75 points in 6 of his outings.

Moving to a new club at 24 years of age could be like a new beginning for Aish. He definitely has talent but needs to lock down a role that works for him.

With the scarcity in defenders, he’s worth a punt – especially if he can lock down a midfield role.

Everyone is expecting a breakout from Andrew Brayshaw this season.

He has added forward status to his name and is coming into his third season at AFL level.

He played up forward for a lot of the 2019 season but increased his midfield time towards the end of the year.

He only had two 100+ scores in 2019, and these came consecutively in rounds 18 and 19, highlighting his late-season form.

More midfield time should be a certainty this season with Langdon and Hill leaving. He should be the next in line.

Looking forward, I think the worst-case scenario for Brayshaw would be a 75 average next season as a forward. But if he does become a full-time midfielder, you’d expect averages of 85+ with plenty of room for growth.

As a forward, Brayshaw is definitely worth snapping up if you can get your hands on him, but also shows plenty of potential as a midfielder beyond this year.

When you take out the players who have had their forward status revoked this year, Matt Taberner is a top 10 forward going on AFL Fantasy averages.

In round 4, he scored 115 against West Coast. He backed it up the following week with his top score of the season against GWS, where he scored 128 points.

In terms of stats, he averaged 17 disposals per game. 12 of these disposals were kicks, which points out his great kick-to-handball ratio. He also averaged 8 marks per game to go along with a couple of hit-outs.

For a big man, these are pretty impressive numbers.

Heff is even considering breaking his key forward rule over him.

This is only one point better than his first season at AFL level. But you could probably put it down to playing in defence all year.

As junior, Cerra was played as a midfielder and had some impressive fantasy numbers.

From a Supercoach perspective, Cerra averaged 98 at the Under 18 Championships and a whopping 137 points in the NAB League.

He has been training with the midfield all pre-season, and we’re hoping Justin Longmuir decides to give him a run in the guts once the season starts.

He’s another player coming into his third year that screams breakout potential, so watch closely.