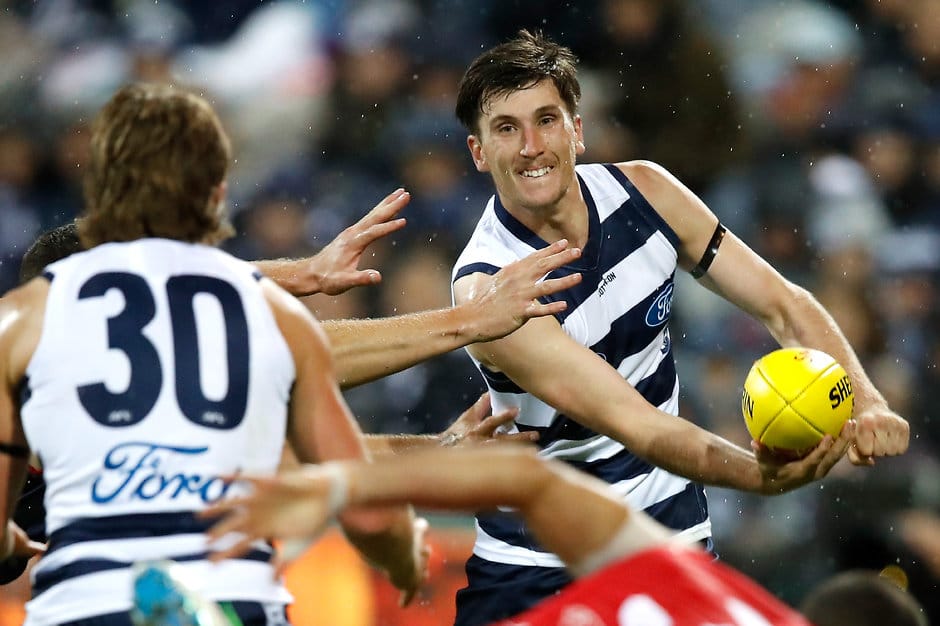 In this article, we’re going to take a look at the Geelong Football Club. Hopefully, we can find some players worthy of drafting in your keeper and deep-draft leagues.

The 20-year-old played all 22 games in his second year in the AFL system.

Kaes is licking his lips as he’s now coming into his 3rd year, which we all know is breakout territory.

He had an average of 66.7 in 2019 and had a roller coaster year from a fantasy perspective. But he still managed 8 games of 80+ playing predominately as a small/pressure forward.

At times he got a run through the midfield and had a few games where he had over 20 possessions. For example, in round 17 vs St Kilda he had 23 disposals, 5 marks, 4 tackles and goal for 96 AFL Fantasy points. This was his top score for the season and showed he had scoring potential.

Looking at his underage career, let it be known that he has midfield pedigree.

In the Under 18 Championships in 2017, he averaged 28 touches, 4 marks and 4 tackles per game as a midfielder for a TOG adjusted average of 94 AFL Fantasy points.

But since playing AFL footy, he has modified his game to become a small forward.

Geelong’s midfield is ageing and he’s a player whose body is ready to go. He also has footy smarts and the midfield history to go along with it. The latter of which not many would have seen coming.

He is a player Kaes would be happy to take early-middle of drafts and see what can happen in the magical third year.

Narkle is going to be on everyone’s radars after his late-season form in the regular-season, which saw him notch up scores of 93, 50 and 111 for an 84.7 average from his last 3 games.

Narkle has always has been highly touted but finally showed us what he can do late last year.

Looking at his VFL numbers, he surprisingly only scored above 100 once and had two scores in the 80s from his 11 VFL games. But his form at AFL level is all we need to get us excited.

Kaes mentioned on the show that he was very impressed with what he saw from Narkle last year. He gave the Cats extra speed and dynamism through the midfield which will be critical for them in 2020.

While he loses forward status this year and is a now a sole-midfielder, Kaes is still certain he is still a good fantasy selection, despite some risk.

When Kaes first saw the position changes, he was immediately happy to write off Jordan Clark for 2020.

There’s no doubt after a quality junior career and the back status heading into 2019, he was a highly draftable commodity.

But with the defender status gone, there were some concerns.

But after a little research, he changed his mind.

Currently, he is in the best 22 at the Cats and while I’m not expecting a huge jump in numbers in his second year, I think he’s a must hold for any keeper league coach out there.

As mentioned, he loses defender status this season but it could be a blessing disguise as you will see him drop down the draft ranks.

You could be in for a bargain if you manage to get him into your side in 2020.

Menegola had a horrible run with injury in 2019.

What was interesting about Menegola last year was the fact he played across half-back as a defender in the finals.

In the qualifying final against Collingwood, he had an awesome game in this new position scoring 84 AFL Fantasy points. However, he was quieter in Geelong’s next two finals scoring 64 points on both occasions.

But it was clear he was playing as a defender in all of these games. If this continues into 2020, he could be an asset to keeper league teams out there.

As it stands, he’s currently a sole midfielder, so we’d need him to start the season as a defender and quickly gain DPP status. However, picking a player and hoping they gain DPP is something we advise against.

With Tim Kelly leaving during the offseason, a midfield spot has opened up. Although, Jack Steven arrived at the Cats during the trade period, and he might have that midfield spot sewn up already. But he can also play up forward – something that Menegola has done in the past.

You will need to monitor Menegola in the Marsh series, taking note of his role and AFL Fantasy scoring in order to make a decision on him for the 2020 season.

However, Constable has stated that he has been developing his game in these areas and hopes to play a bigger role in 2020.

The best of which came against North Melbourne in round 8, where he had 27 disposals, 10 marks, and 3 tackles for 107 AFL Fantasy points.

Looking at his VFL numbers, he played 12 games for an average of 93.8. Among some of his better scores was an AFL Fantasy score of 134 against North Melbourne in round 19, and a score of 124 against Frankston in round 12.

Geelong has a strong older brigade and lots of young midfielders competing for spots, which makes it tough for Constable.

As mentioned, Tim Kelly has left the Cattery during the trade period but Jack Steven looks to have filled that void already.

If he looks like playing from round 1, get on board – this kid has a real fantasy game.

A calf injury kept Lachie Fogarty out for a large chunk of 2019, playing only two games.

In these two games, he scored 43 and 55 respectively for a season average of 49. This is down from his average of 57 in 2018, where he played 15 games and looked to be an emerging talent at Geelong.

Prior to 2020, he was listed as a forward but played as a midfielder in the VFL and the position changes reflected this.

Speaking of VFL, let’s take a look at his reserves numbers for 2019:

Fogarty averaged 76 in the reserves and had a real mixed bag of scoring. Upon returning from his calf injury, he had two big scores of 124 and 100 AFL Fantasy points. This would have made keeper league owner very excited.

However, for the remainder of the year, his scores fluctuated and included some scores in the 20s and 30s.

Going by these numbers, I would be close to writing Fogarty off, but his junior numbers give us hope.

He was a fantastic junior scorer, averaging 98 AFL Fantasy points at the under 18 championships in 2017 (which equated to an average of 98 when adjusted for the difference in TOG). He also averaged a huge 123 in the TAC Cup, showing that this kid has fantasy game.

We’ll have to wait and see if that come to fruition, but he’s worth a speculative pick in keeper league teams for now.