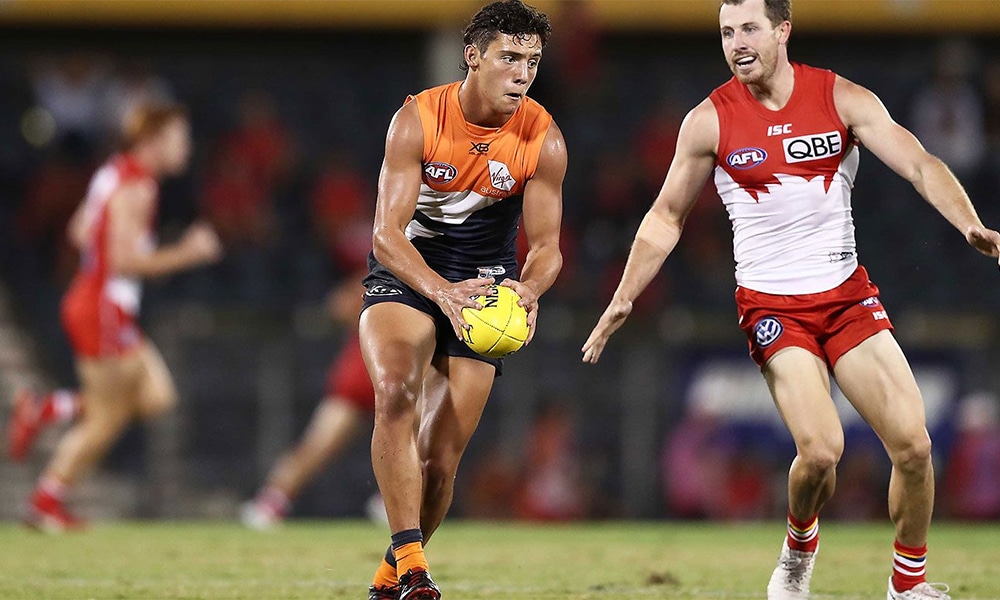 In this article, we’re going to look at Greater Western Sydney’s entire squad and select six players we think could be relevant to your keeper league teams.

There’s lots of love for Jackson Hately at The Keeper League.

It’s highly unlikely that he’d be available in your league. But if he is, you need to get him into your team.

He averaged 68 in his 7 AFL games last season, which included a score of 84 AFL Fantasy points on debut (from only 68% TOG). However, he struggled to play more games due to the strength of the GWS midfield.

Looking at his NEAFL numbers, he averaged 111 AFL Fantasy points per game. He played 13 games and only scored under 100 points on two occasions.

His 13 games in the NEAFL included high scores of 153, 139 and 137 which shows the fantasy potential this kid has.

We believe he is the complete package and will be a fantasy star of the future.

The big question is: ‘What do we do with Callan Ward?’

Ward is 29 years of age and coming off a serious injury, where he ruptured his anterior cruciate ligament in the early stages of 2019.

He’s obviously still in the best 22 when fit, but it looks uncertain as to what he will end up scoring from a fantasy perspective.

Our gut feel is a score in the 80s, placing him in an awkward position in regards to his spot in keeper league teams.

He’s flagged to miss the start of the season but should return in round 3.

He’s still worth a late keeper spot, but it’s going to be risky with the injury concerns. However, if you’re contending you may be able to get him cheap in a trade to use in one of your last midfield spots.

This whopping score of 6 also came from 71% time-on-ground – not the best point-per-minute conversion going around.

But looking at his NEAFL numbers, it looks like he can actually rack up a score when given an opportunity.

He averaged 104 AFL Fantasy points in the NEAFL and had 12 games of 100+ scores. This included two games where he scored above 140 points.

Over the years, GWS has developed a very good midfield so his chances of getting a game early are slim.

However, if they suffer similar injuries to their stars like last season, and Shipley continues to develop in the offseason, he may find himself with an opportunity later in the year.

So despite it looking unlikely he’ll play any time soon, he’s one to keep an eye on and perhaps take very late in a draft to stash.

This guy is getting a bit long in the tooth, so coaches need to be deciding what their plan is for Heath Shaw throughout this pre-season.

Last year he averaged 82 AFL Fantasy points per game, which is down four points from 2018.

Reports are that he’s in the best condition he’s been in for quite some time (aren’t they all?). Perhaps missing out on a premiership has spurred him on.

However, I feel that if you own Heath Shaw, it’s time to think about moving him on to a flag contender for a younger player with potential.

Heff coupled Heath Shaw with Justin Westhoff for Brayden Maynard late last year, and these are the sorts of trades you should be looking at during your pre-season exchange periods.

Over the course of the season, he averaged 79 AFL Fantasy points from the regular season, and 81 points-per-game if you include finals.

Whilst these numbers are fantastic, there are few things that are concerning.

His late-season form coincides with the point where a few GWS midfielders got injured late in the year.

This forced players like Harry Perryman and Zac Williams to spend a lot more time in the midfield and left Haynes to play a fantasy-friendly sweeper role.

If GWS’ midfield is back to full strength this season, that should see players like Perryman and Williams to return to the backline and impact Haynes’ scoring.

Haynes will still be a handy player to have in any keeper league team, but I’m not expecting him to produce the same numbers as he did late in 2019.

GWS were hot on this guy going into the 2018 draft.

He was tipped to debut in round 1 of the 2019 season (despite the quality already present in GWS’ midfield) but suffered a groin injury late in the pre-season holding him out for the start of the season.

Upon returning to the NEAFL, he re-injured himself straining his calf and missed a further month of football.

Once he finally got over his injury problems midway through the season, he put up some decent numbers in the NEAFL.

He averaged 83.2 AFL Fantasy points from 9 games, but this included an injury-affected score of 11. If you take that number out, it bumps his average up to 92 points-per-game.

After some solid performances in the NEAFL, he was given his chance at AFL level and scored 72 on debut. Unfortunately, he could only manage a score of 38 in his second game when GWS got pummelled by Western Bulldogs and found himself out of the side for the remainder of the season.

Looking at his junior career, he was likened to Stephen Coniglio in the way he played but definitely did not produce fantasy numbers as his captain does.

At the Under 18 Championships he only averaged 37 AFL Fantasy points per game and 64 in the NAB League.

These numbers aren’t promising, but at least he has gone on top produce some decent NEAFL numbers and earned an AFL debut.

If Caldwell can cement a spot in GWS’ best 22, it should be interesting to see what he can do given his reputation.