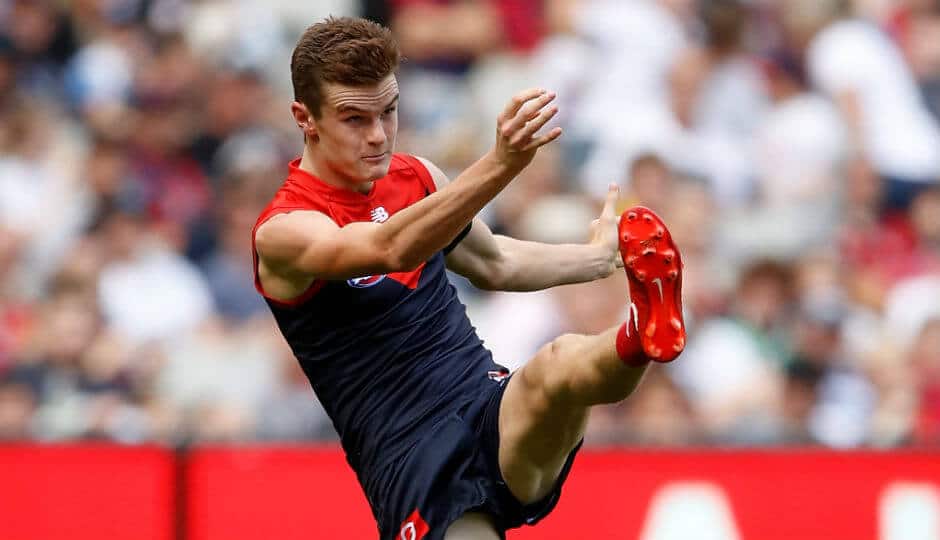 After a shocking season in 2019, the Dees look to have plenty of undervalued fantasy players heading into this season. In this article, we’ll try to find some keeper league relevant players who might slide down the order for you on draft night.

The ex-Giant moved to Melbourne in the off-season where he averaged 74.9 from 25 games last year.

A change in role saw him become the definition of a ‘utility’ and he only averaged 64 from his last 5 games.

His best position is on the wing and that’s the role the Dees recruited him to play in 2020.

If he can cement his spot on the wing without getting thrown around too much like he did at GWS, he should comfortably be that mid 80’s scorer in 2020.

He’s a bit of a risky keeper if you do have him but he should go high in most keeper drafts on his potential.

Fritsch burst onto the scene in 2018 as a mature-age recruit playing 21 games in his first season of AFL.

After being played as a forward early on, Goodwin moved him down back where he averaged 74 for the season.

In 2019, Fritsch started the season down back where he played the majority of his footy, averaging a respectable 71.

The West Coast game in Round 17 was a turning point for Fritsch and he was thrown forward and became a revelation averaging 83 from this point on.

Moving into his third year in the system, I’m expecting him to take a big leap this year and become one of the best fantasy swingmen of 2020.

He’s one you have to keep heading into this year or take early and enjoy the versatility.

Wagner is a player we’ve had a few questions about because of his solid VFL numbers.

He averaged 110 from his 9 games for Casey before forcing his way into the Melbourne side.

Once in the AFL, his role went from midfielder to pressure forward which we know is bad news for fantasy scoring.

He played his role perfectly for the Dees doing all the things you don’t get points for like score involvements and pressure acts.

If his role continues like that, he’s obviously not going to be scoring a lot of points which is bad news.

If the Dees didn’t sign two talented midfielders in Tomlinson and Langdon we might be a bit more excited about his prospects this year but now he probably now spends a bit more time in the VFL once again.

He’s one to monitor throughout the season, especially for those who play with a waiver wire.

May had a horror 2019 after arriving at the Dees last year.

Unfit and injured, the former Gold Coast Captain could only manage 8 games for the season.

I feel that in 2020, there are going to be a heap of undervalued Dees and May is definitely one of them.

A 28-year-old CHB isn’t necessarily a super exciting prospect but if the Dees can return to some form, he’s going to a very handy D3-5 for your side.

Across those seasons, May wracked up plenty of 80+ games and had 3 scores in the 110’s.

At his best May averaged 7 marks a game and had 17 touches. I can easily see those numbers returning in 2020 with a fit May and a settled Dees backline.

You should be able to get him super cheap on draft night and he should be the perfect consistent defender for your side.

Alas, it looks like big Max should be fine but in case anything happens, Preuss is ready to go.

But why get excited about a back-up ruckman you ask? Well because Preuss is the VFL GOAT.

No one in the whole competition averaged more than Preuss in 2019. The big ruckman averaged 132.3 points in his 10 outings.

His numbers are actually staggering, averaging 53 HO’s per game to go with his 14 kicks, 3 handballs, 6 marks and 3 tackles.

He has showed that he can score as a number one ruckman, which he did while Goldstein was injured at the Roos.

The bad: Gawn is only 28, so Preuss may unfortunately need a little Max voodoo doll to get a game in the AFL.

He’s a must have handcuff and one you could also take happily as a little investment in your team’s future.

Hore is one of the guys who is trending the right way in our Breakout Tracker.

Hore played 14 games for an average of 62 at AFL level last season.

He was putting together some fantastic numbers between Rounds 4-10 where he averaged 80 points with a low of 60 points and high of 99.

He then encountered some injury issues which effected his form and saw his average drop which means he will probably be undervalued this year.

After getting his AFL chance late after a great VFL career, he went back and played 4 games at that level last year where he averaged 93 points.

His four games saw him average 20 kicks and 4 handballs (a ratio we love) along with 6 marks and 2 tackles.

He looks like another great value, late pick from the Dees on his best form.