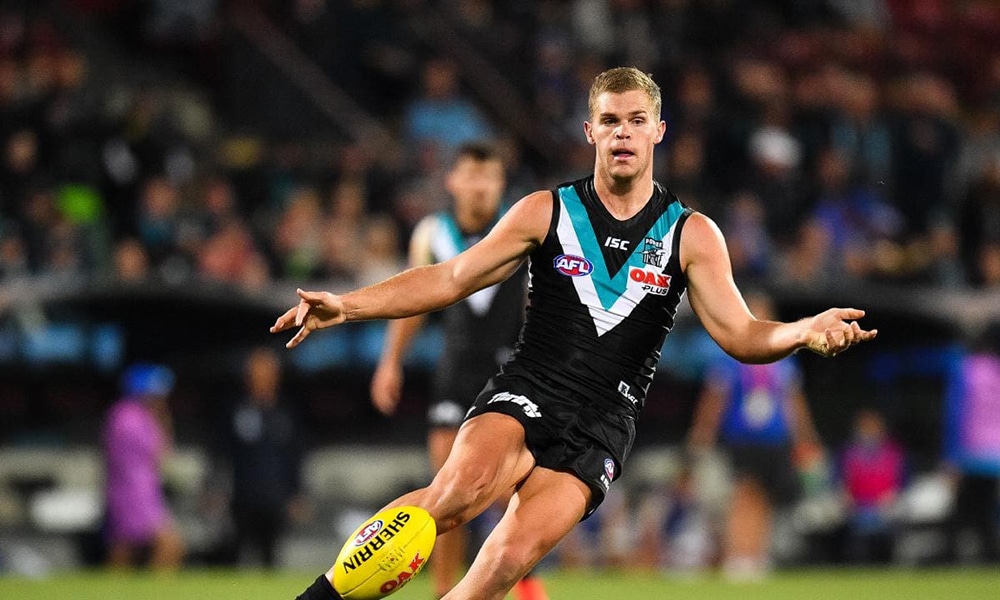 We’ve given Heff the opportunity to talk about his beloved Port Adelaide football club. Hopefully, he doesn’t commit too much time explaining why he thinks Ken Hinkley should be sacked and actually finds you some players to look at. Anyway, read below to see who Heff decided to take a look at.

After plying his trade in defence over his first 2 seasons, he made the move into the midfield in 2019. This resulted in a season average of 81 for Houston last year.

Whilst the 81 average looks great for a defender, if we dig deeper into the numbers we’ll find some interesting stats.

These late-season numbers are pretty juicy and the fantasy world is hoping he’ll continue this form into 2020. He should be given every opportunity to do so with Ollie Wines missing the start of the season.

The best thing about Houston is he retains his back status for season 2020. If everything goes to plan, Houston should become one of those premium defenders by the end of the year.

However, he’ll probably lose his back status in 2021, so tread carefully.

We mentioned Houston’s move into the midfield above, and we believe Bonner can be a real beneficiary of this.

Let’s take round 19 for example, where Houston played close to a full game in the midfield. Bonner slid into Houston’s half-back role and notched up 111 AFL Fantasy points.

Looking at his season averages, they don’t look like anything special as he only managed to operate at 66 AFL Fantasy points per game in 2019. But his last 5 games were promising where he went at 75 points per game to finish off the year.

In the past, there have been questions about Bonner’s place in the side and whether or not he’s best 22 material.

As mentioned, Houston will most likely step into the midfield to make up for the absence of Ollie Wines, so there should be a spot in the team for Bonner.

Dougal Howard also left Port Adelaide’s defence and they don’t have any other talls to fill the void, so they’ll probably opt for another running defender. This further strengthens the case for Bonner’s selection.

What generally keeps Bonner out of the side is his disposal and decision making, so we’ll have to monitor for improvements over the Marsh series.

If he can lock down a place in the side, he should be a handy acquisition.

It seems like a long time ago, but Ryan Burton averaged 84 points and came runner up in the rising star award in 2017.

However, he still hasn’t lived up to the potential he showed back then.

Over the past two seasons, he’s had a few injury concerns that have impacted his performances. This saw his scoring drop to an average of 62 in 2018.

His scoring picked up when he moved to Port Adelaide, averaging 72 AFL Fantasy points per game. This included two injury affected scores throughout the year too. If you take out those, he averaged 79 which is getting into good scoring territory.

If he remains fit for 2020, I can see him averaging 80+ making him an excellent prospect for keeper league teams.

Now that Ollie Wines is going to miss the start of the season with a shoulder injury, this will open up a spot for Willem Drew.

Drew is an inside bull and a SANFL gun but didn’t take the opportunities he was given when he came in as Wines’ replacement last year.

He started 2019 on fire with 86 and 92 point games in rounds 1 and 2 but then flatlined. He played the first 8 games of the season but found himself back in the twos by round 9.

He only had two more appearances in 2019, which included his top score for the year in round 23 where he had 93 AFL Fantasy points.

He showed some really good signs in the SANFL last season.

He played 13 games in the twos for an average of 109 AFL Fantasy points. In terms of stats, he averaged 27 touches and 8 tackles per game. Among these numbers included a top score of 136 and a low of 80, indicating his scoring potential at state league level.

He definitely has the ability to be a decent fantasy player but needs more opportunity.

With Ollie Wines out, be sure to add him to your watchlist.

There’s a bit of pre-season hype about Kane Farrell. All the Port Adelaide players are getting around him.

However, he plays a small forward role which we know isn’t conducive to big AFL Fantasy numbers.

2019 marked his second year of footy where he only averaged 45 points. He did, however, manage to kick 11 goals from the 7 matches he played.

He had his top score against Gold Coast in round 14 where he had 14 disposals and 3 goals for a score of 80 AFL Fantasy points.

Could this be a sign of his true potential?

Whilst his numbers aren’t superb, there’s some intrigue caused by Sam Gray’s departure. Gray was a reasonable forward option in leagues last season and it will be interesting to see of Farrell slots into his role. He’s also recently signed a 3-year deal, which indicates he’s part of Port Adelaide’s plans going forward.

He’s never going to be an elite fantasy scorer, but if he can find a place in the side, he could be a handy option for your last forward spot.

At the start of last year, Karl Amon was heading into his sixth year on Port Adelaide’s list having never averaged over 71 points.

We were ready to write him off but he had his best season to date in 2019.

He averaged 76.4, which included an injury-affected score of 10 in round 2. If you disregard that score, his lowest score of the year was only 60 points which isn’t bad all things considered.

Looking at the other end of the spectrum, he had two games where he scored 100+ and four scores in the 90s.

His last 5-game average was 80 and hopefully, he can continue that form into 2020.

Looking at his SANFL numbers, he played two games for scores of 105 and 99, which is quite good considering the competitiveness of the SANFL.

As a winger, he’s never going to be a premium but could offer scores similar to other reasonable players at this position like Jared Polec and Paul Seedsman.

Hopefully, he was overlooked in drafts last season and is available for one of your last midfield spots.