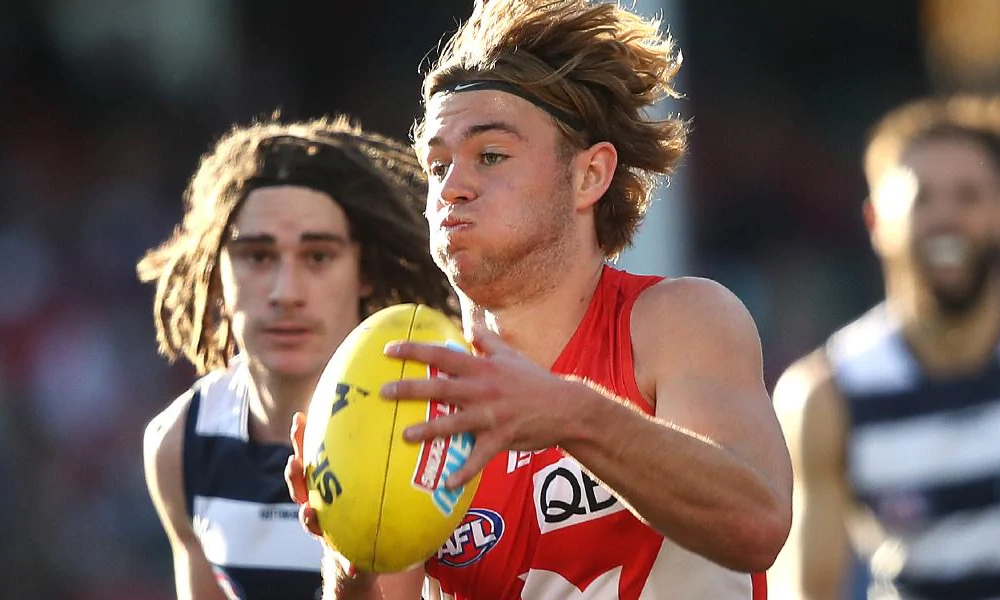 The Swans seem to be on the rebuild which is always a good thing for keeper league coaches. New players will be tried in new positions and there will be a few gems to uncover deeper in drafts as a result. This week we take a look at Sydney to find some players that may be useful in keeper league teams.

Rowbottom has been added to Kaes’ ‘My Boy’ list and is a very juicy proposition for this year.

There’s generally some risk involved with players like Rowbottom, but with forward status this season he almost becomes a must-have player.

Looking at reserves form, his NEAFL numbers were ridiculous. In the seconds, his lowest score was 105 AFL Fantasy points and had a top score of 142.

His body is starting to look AFL ready and could be a replacement for some of the names Sydney have moved off their list in the off-season, like Zak Jones, Kieren Jack and Jarrad McVeigh.

With Sydney attempting to rejuvenate their list, he should be given a lot of opportunities this season.

Florent had a great finish to 2019 and has some serious pre-season hype about him.

In his third year, Florent averaged a moderate 69 points from 21 games. This was slightly up from 63 points from 22 games the season prior.

Owners of Oliver Florent probably expected more from the young midfielder in 2019, but would be happy with the way he finished.

He only notched up the one 100+ score for the season, coming against Port Adelaide in the latter stages of the 2019 season. However, he did have four scores in the 90s.

Florent finished off the season with an average of 89.5 from the last 5 rounds of the season, showing he has the ability to put up some fantastic numbers.

Through natural progression alone, he should add a few more possessions and tackle numbers to his game in 2020 making him a tantalising prospect.

He’s going to be one of the Swan’s midfield leaders of the future, and if you believe the reports coming out of the harbour city, it’s time to get on board this ship.

According to the President of the Young Key Forwards Fan Club (Kaes), we must talk about Nick Blakey.

The kid played 21 games in his first season of footy which is ridiculous for a young player of his frame. What’s more ridiculous is that he only went goalless on 5 occasions which is a huge effort for a young key forward.

Now while he only averaged 49, something about him just screamed ‘future gun’.

He had two scores in the 80s and showed he doesn’t rely on goals to score AFL Fantasy points, only kicking one goal in each of those matches.

In addition, he also had 11 games with double-figure touches. He also put up good tackle numbers throughout the season.

But come 2021, he could turn into one of the premier key forwards of the competition and a fantasy star.

Looking back, we think Sam Gray may have been recruited in case Tom Papley was on the move. So we’re not sure if Gray is currently in Sydney’s best 22.

However, if he does play, he could be handy up forward.

Gray averaged 75 last season. He had ad 8 scores over 80 AFL Fantasy points and 3 games where he scored above 100. His better score came from games running through the midfield and his lower scores came when he was stuck up forward.

Currently, Sydney’s midfield doesn’t look that strong on paper, so there’s an outside chance for Same Gray at some midfield time.

If he can produce these numbers again, he could be a handy forward for your keeper league team.

After looking like a promising prospect in the 2019 pre-season, O’Riordan only averaged 55 AFL Fantasy points last year. If you compare this to 2018, he went backwards after averaging 65 in the previous year.

However, O’Riordan was a regular for a large chunk in the middle of last year.

‘Why is this?’ you ask. Well, he’s a great intercept defender and is often involved in a lot of Sydney’s scoring.

Looking at NEAFL numbers, this guy was immense.

He played 5 games for an average of 119 AFL Fantasy points, averaging 33 disposals per game.

He played the same half-back role in NEAFL as he did in the AFL and was the best intercept player in the competition.

John Longmire wants to play him due to his intercept ability, so we just need him to replicate his NEAFL scoring at AFL level.

He looks like a fantasy player, now needs to start scoring like one. If he does, pick him up.

Lewis Taylor moved to Sydney in the off-season. He’s usually a player we’d write off, but the change of clubs is intriguing.

He was out of the side at Brisbane after round 12 in 2019 and only averaged 70 AFL Fantasy points from the five games he played last season.

However, he went back to the NEAFL for the second half of the season and re-invented himself as a winger. There he averaged 108.6 from 12 games in the Brisbane reserves.

Looking at his scoring history, he’s never averaged more than 77 in the AFL and never really offered more than being some handy forward cover.

This season could prove different but he loses forward status which makes him less valuable.

As mentioned, we’d usually write him off but a change of clubs coupled with this new role sparks a little interest.

Monitor in the Marsh series before making any concrete decisions.