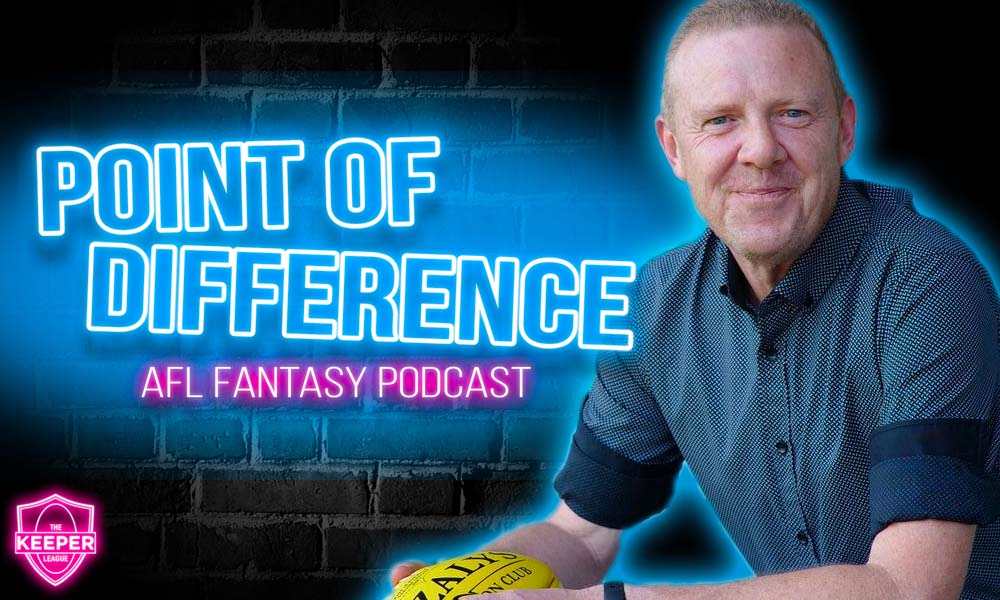 Two-time AFL Fantasy Classic hat-winner, The Statesman, has officially signed on with The Keeper League for season 2022, joining as the new co-host of the Point Of Difference AFL Fantasy podcast.

The beloved fantasy fossil, known only as The Statesman by the wider AFL Fantasy community, is a regular fantasy footy podcaster, self-proclaimed keeper league expert, proven AFL Fantasy Classic gun, and now, an official part of The Keeper League family.

The Statesman joins Dos — the new co-host of The Keeper League podcast — and returning PODPOD fan-favourite, Lewy, to share his knowledge of the game with keen AFL Fantasy coaches.

“Trying to teach Dossy how to play Classic is always a challenge, and I may never get through to him but providing advice to the fantasy coaches who actually listen to me is really rewarding,” The Statesman said.

“This show is a fun way to interact with Keeper League fans that also love playing AFL Fantasy Classic.”

In the first episode for 2022, The Statesman reveals his top five tips for AFL Fantasy Classic, including a strategy that he calls the “Crazy 8” rule. The show looks to blend insights, stats, and plenty of banter, looking at some of the biggest names in fantasy while also, of course, touching on some points of difference!

In a further boost for listeners, Lewy — ironically nicknamed ‘Statesman Junior’ — has also re-committed for another season, eager to surpass his senior counterpart’s ranking in back-to-back seasons.

Lewy will be a busy man in 2022, also featuring as a special guest on The Coaches Panel.

Appearing as a regular panellist on The Draft Doctors podcast for more than five years (a role he will continue in 2022), The Statesman has appeared on a variety of fantasy footy shows – both Draft and Classic.

The Statesman has a storied career as an AFL Fantasy Classic coach, not only having two AFL Fantasy hats to keep him sun safe in summer, but also a massive five top-100 finishes over the journey.

“There’s no doubt an element of luck in the game, but when you look at some of the best coaches: Selby Lee-Steere, Jon Harmey, and Kyle Holmes last year, they have done it multiple times – it’s not just luck!” The Statesman said.

When it comes to a formula, The Statesman sticks to his tried-and-true method but he’s also constantly learning and tinkering each year to improve.

“I have my general formula year-to-year, but it’s certainly evolved – particularly dealing with the rolling fixtures and rule changes over the past couple of years,” he said.

“…when you look at some of the best coaches… they have done it multiple times – it’s not just luck!” – The Statesman.

“Listeners will know that I have some set rules with the way I play, and I’m pretty firm when it comes to rule f—ing ONE – which is having 30 green dots on your team at all times.

“That may be a bigger challenge than ever this year, so we’ll have to wait and see!”.

The Point of Difference AFL Fantasy podcast will deliver free weekly episodes throughout the pre-season.

But in a new feature for season 2022, silver or gold members of The Keeper League will gain exclusive access to weekly in-season PODPOD episodes in our first AFL Fantasy Classic offering for members.

PODPOD listeners can look forward to more golden nuggets of wisdom throughout season 2022, while also gaining access to a plethora of premium fantasy footy resources perfect for Classic, Draft and Keeper coaches.

We welcome Stato to the main show this year!

Show him some love by following him on Twitter, @Statesman33 – and be sure to sign up as a member of The Keeper League for season 2022!