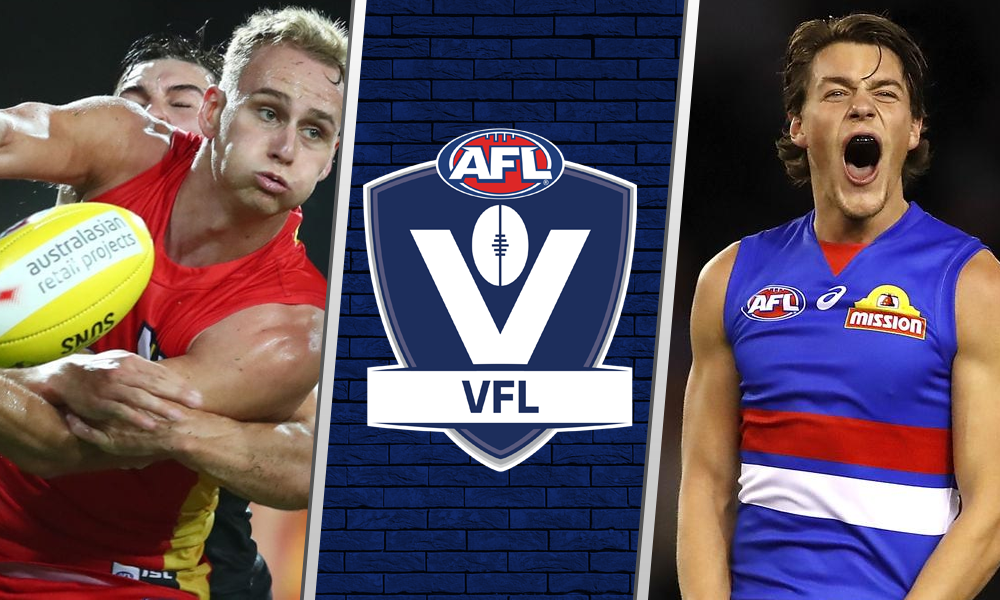 The VFL season was interrupted by COVID-19 last year, but at least we got to see some football for the reserves as opposed to 2020.

Looking at state league fantasy scores, we can take a look at how players yet to break into the senior side might perform from a fantasy perspective.

Identifying good fantasy scorers at this level might help us identify the next fantasy superstars at AFL level, so in this article, I will pick 5 AFL-listed players who scored well in the VFL in 2021 and assess whether it may translate to AFL level given the opportunity.

Playing in the midfield for the Gold Coast reserves in 2021, Will Brodie put up some monster scores.

He played 9 VFL games last season for an AFL Fantasy average of 117.4. He scored 100+ in all but two of these games, with his top score coming against Collingwood in Round 3. In this game, he had 19 kicks, 23 handballs, and 10 tackles for an AFL Fantasy score of 152. He also had another big score in Round 1 against Footscray, notching up 137 points.

Chances at AFL level were few and far between at Gold Coast last season for Will Brodie. Also, when he was promoted to the senior team he wasn’t given the same opportunities in the midfield as he was at the VFL level. This resulted in a measly AFL Fantasy average of 51.2 in 2021.

Moving to Fremantle during last year’s trade period means Will Brodie should see more opportunities at AFL level, with talk of him replacing Adam Cerra in their midfield brigade.

If this comes to fruition, he should put up some reasonable numbers. in 2019, he averaged 87.8 from 8 games and showed some promising signs from an AFL Fantasy perspective in the lead up to that season.

The issues with Will Brodie have always been role and job security, but he should get both at Fremantle.

Look forward to some handy fantasy scoring in 2022.

After being traded to Collingwood, he seems to be in line for a regular midfield gig in 2021 and we couldn’t be more excited for it.

As you are all probably aware, the Western Bulldog’s midfield is a tough one to crack, so Lipinski was forced to play on the wings when he prefers to play as an inside midfielder. He also failed to play a game after Round 16, showing that he was firmly on the outer down at Footscray.

However, when he plied his trade in the reserves he put up some good numbers. He played four games in the VFL for an AFL Fantasy average of 114.5, with his top score of 143 points coming against Geelong in Round 10. In this game, he had 16 kicks, 20 handballs, 6 tackles, and 3 goals.

Despite not locking down a spot at Western Bulldogs, Lipinski has shown some promise at an AFL level in previous years. When he was given midfield opportunities in 2019 (his third season of footy) he managed to average 85.5. This had members of the fantasy community salivating, but he obviously didn’t continue with his scoring prowess from that point onwards due to the lack of opportunity.

By all reports, Craig McCrae has been impressed with what he’s seen from Lipinski so far and should see a permanent midfield role in 2022.

Darcy MacPherson is another player who scored well in the VFL in 2021 but struggled to lock down a permanent role in Gold Coast’s senior team.

Playing 7 VFL games in 2021, Darcy MacPherson averaged 117.9 AFL Fantasy points, going at 15 kicks, 11 handballs, 4 marks, 6 tackles, and a goal per game. He only scored under 100 once at VFL level last season, and that one sub-100 score was a 94 point game which highlights his consistency.

His issue at the senior level was similar to Will Brodie’s in that he couldn’t lock down a permanent role at the top level, and when he was given opportunities he was played up forward as opposed to the midfield role he played in the VFL.

MacPherson was close to leaving Gold Coast in the trade period last season but ended up staying. As it stands, I’m not sure where MacPherson fits in the Gold Coast midfield depth chart, which means he may be forced into playing the same forward role again in 2022.

This is disappointing as he has shown he can score well when he gets some decent midfield clock. In 2019, he averaged 87.3 AFL Fantasy points and came third in their best and fairest, but has since faded.

If he can get more midfield time in 2022, there’s no reason he can’t be a decent scorer but he may struggle to get that opportunity.

Constable is a player that we must have on our watch list.

Debuting in Round 1 of 2019, he enjoyed a great start to career. In his first game, he put a very respectable score of 82 and backed it up with the 106 the following week. After the first the rounds of 2019, Charlie Constable was averaging 91 points and was turning heads in the AFL Fantasy world. He went on to average 83.4 from 7 games in that season, after he was hampered by injury in the seond half of the year.

Heading into 2020, fantasy coaches had high hopes for Charlie Constable but it hasn’t gone to plan for the young midfielder. Since then he struggled to lock down a spot in Geelong’s best 22 with questions raised over his fitness and injurance.

This year he has been traded to Gold Coast, where we’re hoping he can get some regular game time in the midfield. If he does, we could be on to a winner.

Looking at his VFL numbers from last season, he averaged 111.3 AFL Fantasy points from 9 games. Playing in the midfield for Geelong Reserves, he averaged 16 kicks, 16 handballs, 5 marks and 4 tackles per game. He also managed to put up some big individual scores in the VFL, with a gigantic score of 161 points in Round 11 against Brisbane. He also had two scores of 129 throughout the season.

This shows us that when he’s played in the right role and given consistent game time he has the potential to score.

But will he be given that game time?

Looking at Gold Coast’s lists, they have quite a bit of midfield depth at the moment. The big move in the trade period was High Greenwood unexpectedly moving to North Melbourne, which opens a spot of sorts but we suspect that this will be filled by Brayden Fiorini, as this happened after Greenwood got injured last season.

With youngsters like Matt Rowell and Noah Anderson likely to increase their midfield minutes in 2022, Constable might find it hard to break into yet another side.

There’s no doubt he has the potential to score if he does play but I get the feeling he’s only at the Gold Coast for depth at this point in time.

Jake Riccardi burst onto the scene in 2020, putting up BCV scores of 109 and 104 in his first two games. However, 2021 was a different story. He only averaged 43.4 in his second season and struggled to hold a regular spot in the side which saw him play a few games in the twos.

And when you look at his VFL numbers you’ll notice are a little unusual.

After being dropped from GWS’ senior side in Round 6, he went back to the reserves and pumped out a score of 186 points. On paper, this number looks impressive but if you were able to watch this game, you’d see that Riccardi played on the half-back line and took a number of intercept marks (19 marks in total for the game) to boost his score.

He was recalled to the senior team after this performance and was given a chance in defense but failed to perform anywhere near the level he did in the VFL.

He was soon dropped again and played the next 5 games in the VFL before COVID-19 ended the season prematurely. However, he managed to put up some more good numbers in this time playing up forward. In Round 9 against Aspley, he kicked 8 goals for a score of 170 AFL Fantasy points. He also had a good game a couple of weeks later against Sydney with 3 goals and a score of 107 points. But the rest of his scores were up and down, finishing the season with an average of 112.2.

Again, while his average looks impressive, it’s hard to get a gauge of what he’s capable of at AFL level. When he burst onto the scene in 2019, he had Jeremy Cameron taking the best defender each week and essentially played as the third tall behind Harry Himmelberg. Obviously, Cameron left which hurt Riccardi, but there is now also a lot of attention on him given that opposition coaches know what he has capable of.

With all that said, I think Riccardi is still worth owning in keeper leagues given his scoring potential, but try to let him slide a little bit and nab him at the right price in your drafts.

Gain access to the all VFL Fantasy Scores by becoming a member. Members can view the full table here.