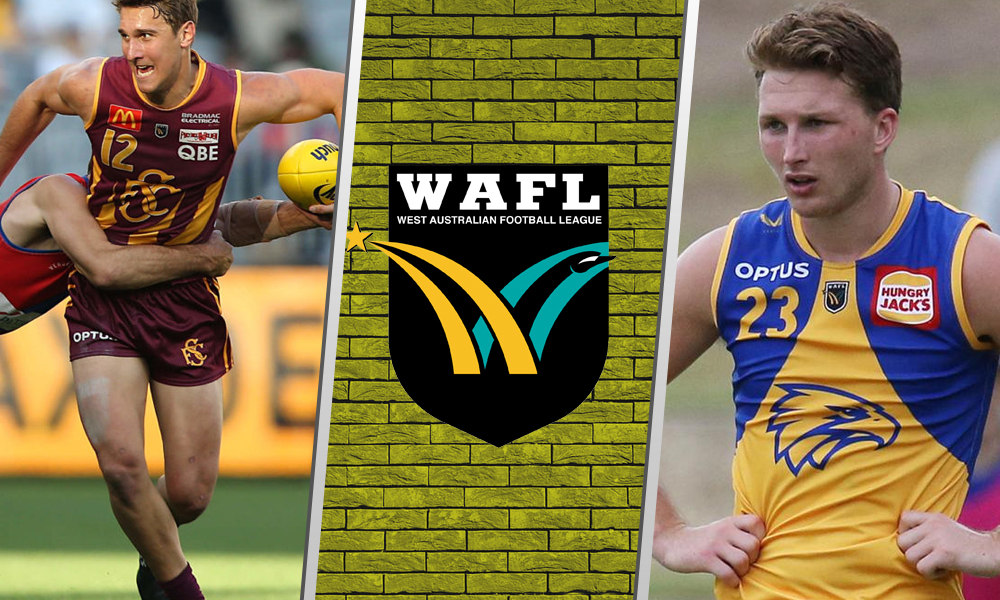 Looking for a fantasy gun, or perhaps a cheeky mid-season draft streamer? Look no further than the WAFL!

Whether you play in an AFL Fantasy keeper, draft, or classic league, it always pays to keep an eye on the state league fantasy scores to stay ahead of your league mates.

AFL-listed players that carve up on the stat sheet at WAFL, SANFL, or VFL level tend to be the first called upon when a spot opens at the elite level. In a high-quality league like the WAFL, big scores can often translate well to the AFL if a similar role is available.

The more closely we monitor these performances, the better understanding we have of their fantasy potential, and the quicker we can jump on the waiver wire to snap them up!

We can also gain an advantage in our pre-season research for 2022.

Looking at the fantasy scores from the previous season, we can see which players were putting their name up for selection, and even find out more about some players who haven’t even been sighted at AFL level yet, including new draftees.

With that in mind, let’s look at some of the best performers from the 2021 season in the WAFL.

After being a serviceable D5-6 for our fantasy teams in the shortened quarters 2020 season, Nelson went back to being a streamer in 2021.

Two big tons – including 142 fantasy points – at WAFL level (in his only two games in the reserves) give us hope that the 25-year-old might have some value late in drafts should he get a bigger role with the retirement of Brad Sheppard.

Clark arrives at West Coast in a time of need. The Eagles still have the spine of a premiership contender but also have an aging core, and a midfield lacking the depth of a true contender.

None of their midfield stars can seem to stay on the park, and with Jack Redden already delayed in his preseason recovering from a shoulder injury, Clark may slot in the side early and could be a prominent fixture at centre bounces.

The 24-year-old’s monster numbers in the WAFL – 28 disposals, five marks, seven tackles a game – suggest he’s ready to go from day one.

Another player likely to benefit from the departure of Brad Sheppard, Witherden will, and should, be kept in all keeper leagues.

He’s always been a high fantasy scorer at league level, his issue is keeping healthy and the occasional defensive lapses that sneak into his game.

A kick-in specialist, Witherden had the highest kick-in average of any Eagle at AFL level in 2021 – and should hold the role for years to come, particularly when Shannon Hurn hangs ‘em up.

The mid-season draftee averaged some big numbers across three games for the Eagles WAFL side before earning his debut.

Prior to being drafted, he was putting up similarly impressive numbers at West Perth in 2021, averaging 27 disposals and six tackles a game.

Available as a forward in AFL Fantasy in 2022, the 22-year-old becomes an enticing late-round flyer in keeper redrafts.

A solitary game – and ton – at WAFL level for Acres last season was enough to earn him an immediate recall to the seniors.

However, unable to stamp his authority on a wing role for Fremantle last season, Acres enters yet another season in role limbo.

With the departure of Adam Cerra, and David Mundy turning 37 during the season – could Acres be a smoky for some more CBAs in 2022?

There are plenty of more names on the 2022 watchlist for both Western Australian teams.

Does Luke Valente finally break through to the seniors? Will Jake Waterman emulate his huge numbers in the WAFL at the top level? Is Will Brodie going to be forced to play twos again? Will it be a fairytale comeback for Willie Rioli after a long layoff?

Other than these burning questions, we also get to set our eyes on the new batch of draftees:

The draftee I’ll have a close eye on in both the pre-season and early WAFL games – should he not earn a Round 1 debut – is Neil Erasmus. A ball magnet with a big frame and huge upside, if he’s playing in the two’s, the WAFL just earned themselves a new viewer.

Matt Johnson is another who’ll be monitored closely by fantasy coaches, as we see if his solid junior fantasy stats translate to league level.

Eagles top draft pick, Campbell Chesser could make an early debut after making sure he evacuated Victoria in time for some pre-season training in WA. If not, he’s one to watch in the WAFL.

Brady Hough is one that ‘The Oracle’ has flagged as a late flyer in keeper leagues for his high fantasy ceiling and juicy kick-to-handball ratio who is likely to cut his teeth at WAFL level early next season.

Be the king of your waiver wire

Always stay on top of state league fantasy scores to hit the waiver wire faster than your league mates this fantasy season by becoming a member of The Keeper League.