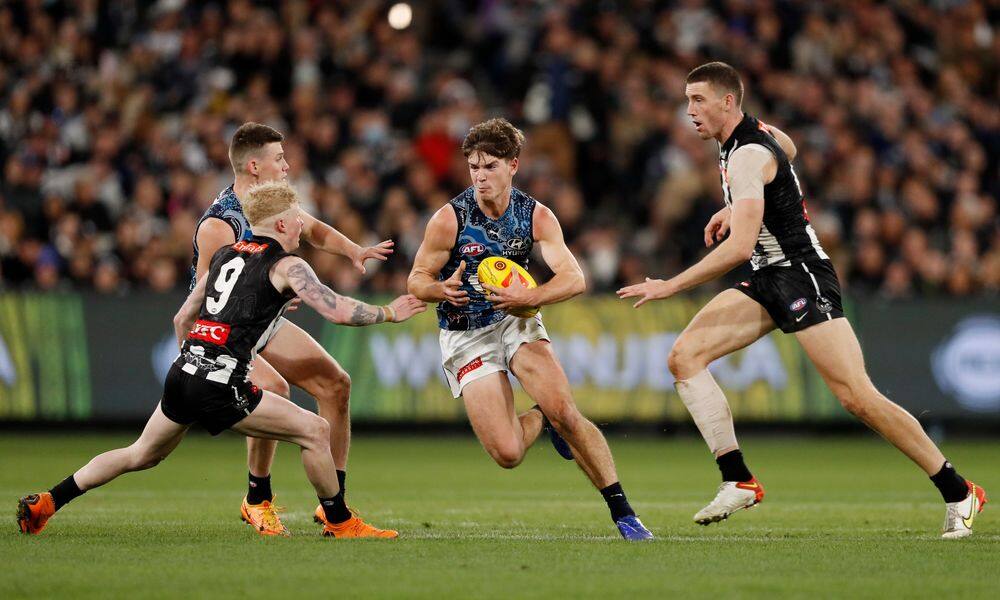 Dos has been calling for this for Archie Perkin’s move to the midfield for weeks, and it finally happened on Sunday.

Perkins attended 84% of the centre bounces for Essendon, which was the most out of any Essendon player. His 84% attendance rate was also a +68% differential from his season average. As a result, we saw a bump in his scoring putting up 82 AFL Fantasy points on the weekend.

We’re feeling that this might continue over the next few weeks as Essendon knows that their season is over and will probably start trying a few different things over the coming weeks. We also saw McGrath and Caldwell used significantly less at the CBAs so this might also be an indication they are clearing up a spot for him.

As a second-year player, Perkins is definitely someone you should be looking at if you have a rebuilding side. He should keep forward status going into next season and will be primed for a breakout year in 2023 if this midfield role continues.

He has been putting up some big numbers in the Carlton VFL side this season and has been on the verge of a call up for weeks now and it finally happened on Sunday.

Returning to the senior side for his first game of the year, Paddy Dow attended 15 centre bounces for Carlton, which equates to a 58% share of the CBAs for Carlton. He also did this in only 65% time-on-ground which makes this effort look a little more impressive.

We all know that Paddy Dow has struggled to score in AFL Fantasy previously, but he put up a respectable 72 points this week, scoring at a rate of 0.94 points-per-minute.

It’s tough to say whether he holds his spot in the coming weeks. With Matthew Kennedy to come back into the side, he probably struggles to remain in the team. If he does somehow manage to lock down a spot, I’m not sure he puts up too many big scores playing in that star-studded Carlton midfield.

But he is a podcast favourite of ours and it would be remiss of me not to mention him in this article.

After a lean spell this season, Tom Mitchell appears to be firmly in the midfield mix again at Hawthorn.

Prior to this week, Tom Mitchell had only averaged a centre bounce attendance rate of 55%, but this week he rocketed up to a rate of 79% and put up 112 AFL Fantasy points.

What I take from the last two weeks is that Hawthorn is starting to settle down their midfield rotations a little more which is a good thing for Mitchell. I also feel like Worpel and Ward going out of the side in recent weeks have provided more opportunities for Mitchell to score in the midfield.

Hopefully, this continues for the rest of the season.

I flagged on the podcast that Atkins went into the midfield to play some defensive roles on Port Adelaide midfielders.

It appears to me that Mark O’Connor and Tom Atkins have effectively swapped roles at Geelong giving Atkins an extended run in the midfield which should to better scoring going forward.

Watch with interest to see if this continues, but it looks promising for owners.

A few weeks ago we were preparing to give this guy #2G4P status. Fast forward to now and we’re looking at one of the biggest dips in centre bounce attendances over the weekend.

Luckily, he’s only been shifted out to a wing so he hasn’t been removed from the midfield completely, but it looks like it has affected his fantasy scoring as the role did not suit his natural game.

Players are often prone to bad scores from time to time, so it’s not panic stations for Sparrow owners just yet, but it’s something they’ll be watching closely in the coming weeks.