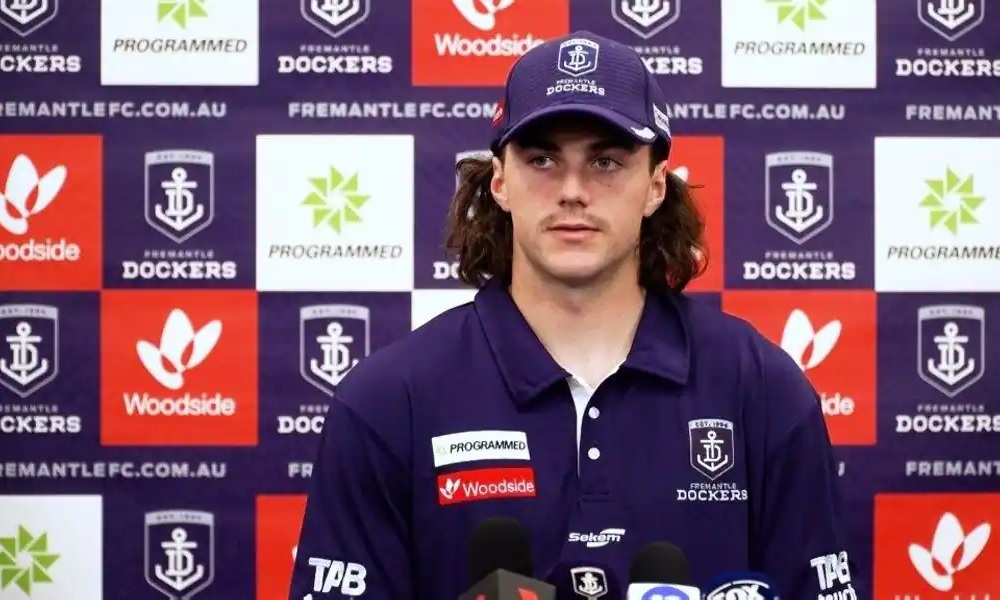 Ah, the kick-in. It’s the easiest +3 an AFL Fantasy coach can ask for, made even easier in recent years thanks to a couple of handy rule changes. It’s a stat that can transform a borderline D6 into a bona fide fantasy stud.

Players who take the kick-ins tend to have a tremendous peg, sitting in the very top-end of kicking efficiency for their team. When a team has two or more quality users, sometimes it simply comes down to a footrace to the goal square following a behind.

There’s only one simple rule that MUST be obeyed. Your favourite kick-in artist must step outside the goal square, and voila! Free cheese.

Let’s check out 5 players who could bump their AFL Fantasy in 2022, thanks to some extra freebies.

Jake Lloyd is the most well-known of the kick-in maestros, and he’s finally found a perfect heir in second-yearer, Campbell.

The 19-year-old was drafted at pick five in the 2020 AFL Draft for his elite kicking ability but didn’t quite hit full stride in his rookie year, thanks in part, to injury.

The Swans will be asking Campbell to play a bigger distributing role following the departure of Jordan Dawson, who also leaves 28% of the team’s kick-ins up for grabs.

Despite only taking five kick-ins for the season, Campbell knows the fantasy way, playing on 100% of the time.

Clark is finally free to strut his stuff at the Dockers with word emerging that the new arrival has found a home in defence for Coach Longmuir.

Rating elite across his career for kicking efficiency, Clark should join the list of Freo players begging for a chance at a +3.

Luke Ryan (65%), Nathan Wilson (37%), and Hayden Young (11%) – the latter also another great candidate for a kick-in boost – are the players he’s contending with at his new club for a share of the Sherrin.

The difference for Clark? Winning the Grand Final sprint just a couple of years ago, Clark’s combination of undeniable observable thirst and ground-breaking speed should get him over the line in a foot race back to the goal square.

There are already a few rumblings out of the Suns that Jack Bowes is guts-bound and Jack Lukosius could be shifting forward.

Could that spell even more plus-threes for the Suns leading kick-in specialist of 2021? Bowes and Lukosius received 31% and 30% of Gold Coast’s kick-ins respectively – second and third for the team by average.

Powell took the reigns more regularly as the season went on, regardless of any changing roles in the upcoming season, averaging 45% of the Suns kick-ins over his final six games.

The 22-year-old does, however, need to work on his thirst. Powell played on just 60% of the time – a horrific injustice for his loyal fantasy coaches. For comparison, hall of fame kick-in specialist, Jake Lloyd, stepped out of the square on 99% of his kick-ins in 2021.

Not a name usually mentioned in fantasy footy circles, a late-season switch to defence was just what Rioli needed to spring to fantasy life.

In his final six games, Rioli averaged 75 AFL Fantasy points, went at 84% kicking efficiency, and was even rewarded in the form of kick-ins in his final two games of the season.

Having not recorded a kick-in for the entire season up until this point, Rioli recorded 20% and 18% over these two glorious games, pushing his play on percentage from 50% to 100% by his second game – clearly learning fantasy best practice.

With the retirement of Bachar Houli, who sat third by average for the Tigers from his 12 games in 2021, there are plenty of points up for grabs for the 24-year-old.

It’s been a tough couple of years for Brad Hill since arriving at the Saints, struggling in the weird 2020 season, then shifting positions in 2021 as coach Brett Ratten looked to enhance the former wingman’s impact.

After barely getting a kick-in prior to round 9, Hill’s involvement lifted before the Saints bye before he was truly placed in a key kick-in role post-bye.

Hill averaged 26% of the team’s kick-ins after round 14, which included zero kick-ins in a game against the Swans – where just four total kick-ins were on offer.

Most importantly, Hill knows the laws of fantasy footy. He played on 89% of the time and played on from every kick-in on 11 occasions throughout the season.

Conversely, Saint Kilda’s leading kick-in specialist, Dougal Howard, had only 3% of the team’s available kick-in opportunities over his final three games, after recording a seasonal average of 45%.

Don’t miss a kick-in this season! Sign up and become a member today.

Already a member? View all of the kick-in data here…