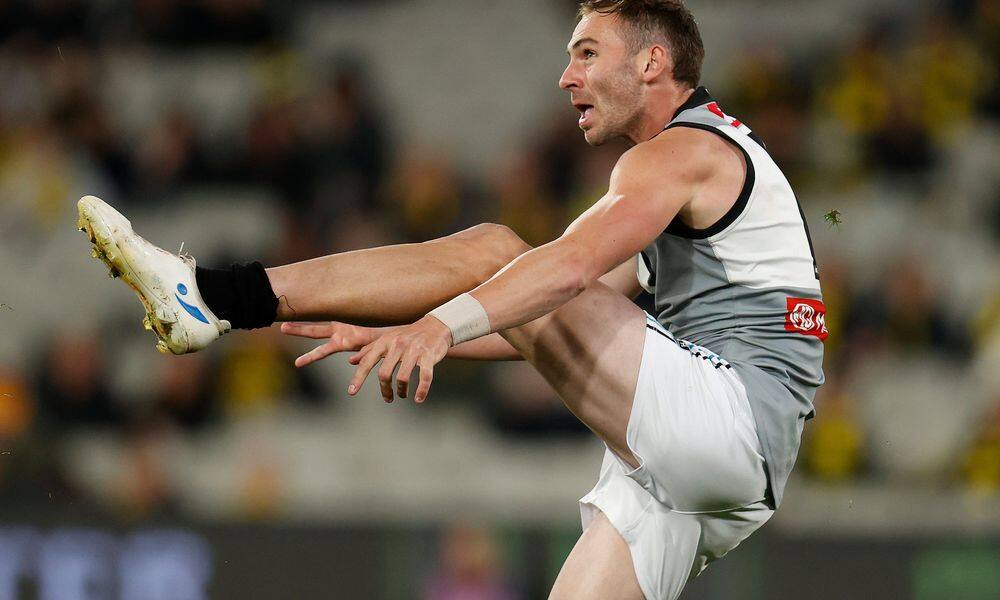 With Sam Hayes out this week, I thought Jeremy Finlayson would get one week in the ruck and everything would revert back to normal the following week.

But comments from Port Adelaide assistant coach Brent Montgomery suggest that Finlayson might be the number one man in the ruck for a few weeks.

Last Thursday, Finlayson went to 19 centre bounces (79% of the CBAs for Port Adelaide) and put up an AFL Fantasy score of 79 points; Not bad for a forward.

However, he only won 9 hit outs for the night and history suggests that your midfield will struggle if you aren’t getting first use of the football. With new recruit Brynn Teakle having a good game in the twos, along with Scott Lycett only being a few weeks away, Finlayson’s ruck role might only be short-lived.

Pick Finlayson up in your draft leagues for the next few weeks to capitalise on this little bump, but don’t expect it to hang around for too long.

We mentioned him last week, but I feel like it has to be mentioned again – Archie Perkins is going to a lot of centre bounces at the moment.

After only averaging 9.3% of the centre bounce attendances for Essendon up until round 10, Perkins has attended 84% and 73% of the CBAs in his last two games.

Perkins is a player that keeper league coaches need to get on board now. He was a highly rated junior who we’ve been waiting to see in Essendon’s midfield and it’s finally starting to happen.

He should get some decent midfield experience throughout the back end of this year and be primed for a third-year breakout in 2023.

After Parish got injured on Friday night, we saw Shiel move into a more prominent role in the midfield.

He attended 86% of the centre bounces, which was a 19.7% rise in his CBA attendance rate when compared to his season average of 66.3%. Naturally, we saw him put up a massive score of 123 AFL Fantasy points.

Owners of Shiel in keeper leagues would be excited by these numbers, but it’s been revealed since Friday night that Parish only suffered a corky and should be right to play this week.

Despite this good score, I don’t think Shiel is rated highly within the four walls of Essendon and I can’t see him putting up consistent scores this season as Essendon begin to focus on the future in the back end of 2022.

After spending a lot of time up forward in recent weeks, Jack Graham was back in the midfield mix for Richmond.

Graham only averaged 12.5% of the centre bounce attendances for Richmond in his previous two games, which has coincided with Dustin Martin’s move back into the midfield since returning from some time off. Last Thursday night, he went to 38% of the CBAs and scored 96 AFL Fantasy points (which was the top score for Richmond).

It’s since been reported that Dustin Martin has been battling an illness which may explain why Graham saw a bump in his CBA numbers in round 13. There’s also talk that Dustin Martin may miss this week which would be good for Graham’s fantasy scoring.

However, long term I’m not sure how he fits into the Richmond midfield. Whether it’s a permanent midfield role or as a part of a rotation up forwards remains to be seen.

I think most fantasy coaches would prefer Graham to stay forward as much as possible this season so he can retain forward status for next year, and then attack 2023 with a full pre-season under his belt. But I’m not sure this will be the case.