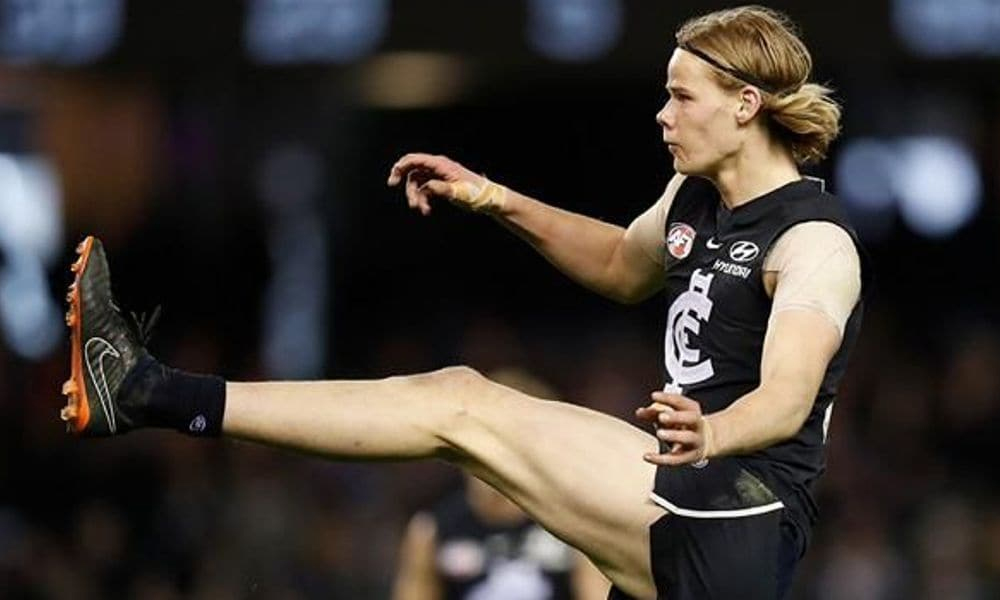 We’re up to the Blues! Let’s see if we can find a few players that will make worthy acquisitions to your keeper league teams in 2021.

Gibbons was a real surprise packet in 2020.

He finished as the 35th best forward in the competition with a BCV average of 76. This would have made him a starter in most keeper league teams.

He had some great performances throughout the year, including a score of 106 (132.5 BCV) in Round 4 against Essendon.

He started the year playing as a small crumbing forward but started pinch-hitting in the midfiled later in the year, which is where he played in the VFL prior to getting drafted. Whilst playing in the midfield, he showed how dominant he can be given the right opportunity.

He played 15 games in 2020 and had 15 possesion or more in six of those appearances, including a season high of 25 disposals (also in Round 4 against Essendon).

His consistency was a highlight, having only two games where he scored under 50 AFL Fantasy points.

Out of the small forwards at Carlton, he’s one of the better players in terms of fantasy, as he is able to kick goals up forward and get a few touches in the midfield.

With the scarcity of forwards this season, he’s an underrated pick and should provide value in 2021.

I’m a big fan of Fogarty, who finds himself at Carlton after the 2020 trade period.

Looking back at his numbers playing for Geelong last season, he averaged 57.7. Diving into the numbers a little more, he had one horrid score of 27 in Round 9 against West Coast. If we take this score out of his average, it jumps up to 64.4 (80 BCV) which would have landed him #2G4P status in 2020.

He is listed as a forward in AFL Fantasy, but Chris Scott would often talk about him being used as a midfielder and that’s where he was best played. The only issue was that Geelong’s midfield was too strong for him to get a game consistently.

Now he’s at Carlton, he should get more opportunities. Behind Cripps, Walsh and an ageing Curnow, Carlton’s midfield depth falls away dramatically. So hopefully he’s used for bolstering their midfield stocks.

Listed as a forward, I’m big on Fogarty this season. Especially if he can get that midfield time.

There was a lot of hype about him last year. With Kreuzer on the brink of retirement and no recognised replacement behind him, people were expecting big things from Pittonet. Especially given his VFL form the season prior.

He started the year in good fashion, with scores of 74 and 78 in his first two games. But as it turned out, he only managed a BCV average of 68.

He really seemed to struggle playing in tandem with De Koning, which is a concern as we feel like De Koning will be the number one ruckman long term.

While we’re on the topic of Carlton rucks, we better talk about Tom De Koning.

We really liked the look of him last season. He played 7 games, and despite only managing a BCV average of 52, he looked to have some potential.

He’s clean with the footy and an athletic type who showed he can hold his own when it came to tap ruck work. These are attrbutes you look for in up and coming fantasy ruckmen.

His top score of the year was 67 (84 BCV) which came against Sydney rucking against Callum Sinclair. He had 19 hit outs in this game, which is a good return against an established ruckman and showed he could hold the ruck mantle on his own.

The issue is he’ll probably play in tandem with Pittonet until he has developed a little further. This will affect his fantasy scoring in the short term.

Whilst he might not hit the fantasy heights coaches want him to straight away, we think he’s a good long term option if you can stash him in your team for a year or two.

We talked him up in the pre-season last year but he started the season slowly. He had a huge score of 99 points (124 BCV) against Essendon in Round 4 and we thought it might be a defining moment. But it wasn’t to be.

After this game, he had a lean run and put up some low scores throughout this period. However, in the final game of the season against Brisbane, he had a score of 84 (105 BCV) to keep us interested for 2021.

Despite this final game, we think he lacks the consistency to be a good fantasy scorer. He definitely has the talent and has shown some signs, but he’s the type of player who will drive you crazy.

Couple this with the number of players Carlton have who play a similar role and he could be a nightmare selection in 2021.

He has forward status this season, which is enticing, but I wouldn’t be picking him up unless it were a very late selection in your draft.

A few years ago, we thought Petrevski-Seton was going to be a big player in AFL Fantasy.

In hindsight, it was a bad call when you consider the other defenders Carlton had in their side.

With Docherty and Simpson, in the side, along with the addition of Newman since then, it was always going to be hard to improve his scoring.

Simpson has retired, but they have picked up Saad in the off-season, which doesn’t make things easier for Sam.

He averaged 54 points (67.5 BCV) last season which is nothing to write home about. But the encouraging thing was his end to the 2020 season. He averaged 75.5 from his last three games, which is a BCV average of 94.3.

The uptick in scoring seemed to be linked to the fact he played the majority in defence as opposed to the wing where he spent a few games in 2020. Hopefully, his role in defence continues this year.

Whilst Sam Petrevski-Seton does look like a fantasy type, I’m worried that he has already hit his ceiling in terms of scoring.

However, his value will be low in 2021 so you may be able to get him quite cheap and he’s definitely worth taking a punt on.