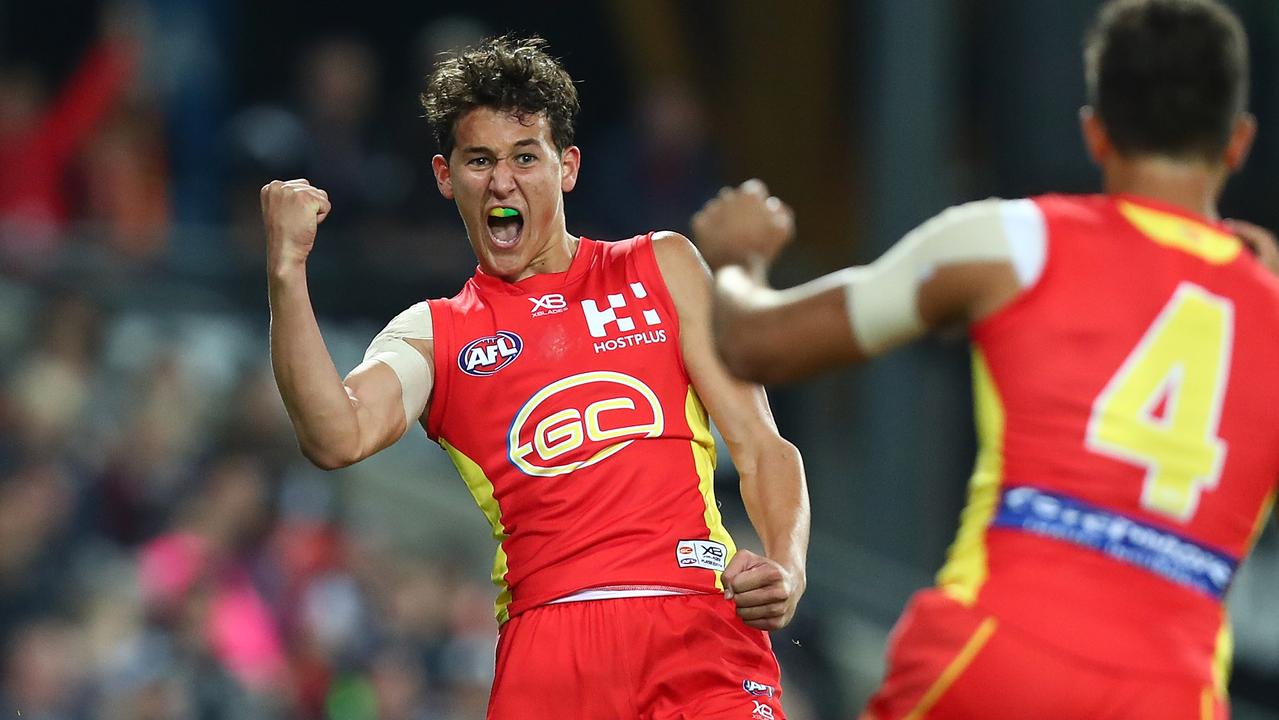 The Suns have proven to be very handy fantasy scorers in the past and there are a few young guns that will be worth grabbing in your drafts this year!

Keep on reading to find out who Kaes thinks is worth picking up in 2021!

I’m very big on this guy.

He could almost be considered my boy. He’s very, very close to getting a seat on the bus.

Ainsworth averaged 77 last year which I thought was #2G4P but we’re obviously lifted the standard here on the Keeper League.

He had some really good games but also some quiet ones in 2020.

A big feather in his cap was that he registered a corona tonne, scoring 107 points against the Kangas from only 79% TOG.

He finished the year strongly which I love, averaging 95 in his last four games and I think that’s an average he truly can get close too.

Times last year he played that connector role so well, the one that Tom Lynch made his own when the Crows were up and about.

He has a natural high kick/mark style game and I think he really can take the next step this year.

Get him in your side at all costs!

Big Jack was so close to being #2G4P last season.

Ended 2020 as the 153rd ranked fantasy player which is a huge achievement for a tall in their second season.

Recruited as a key forward, Lukosius has proven to be a revelation across half back.

He’s fantastic with the ball in hand which helps him have a very tasty Kick to Handball ratio, averaging 13 kicks and 4 handballs per game.

Has all the makings of a gun scorer and one who looks very settled in his position for a long time.

Get on board – he has a massive future.

He continued to develop and shine after Rowell went down injured and just looked so polished in his first season.

Rowell will get a lot of attention again (and rightfully so) in 2021 but Anderson is one you shouldn’t sleep on.

Anderson averaged 16 touches, 3 marks and 2 tackles a game which is a high quality debut season.

What I loved is he didn’t slow down towards the end of the year, as some rookies do, he actually got better!

I doubt many coaches will be delisting him in most decent sized keeper leagues but if he is one that finds his way to the draft pool, he’s one I’d be targeting hard.

Bad news for Brodie owners, he’s probably still not going to get a game.

Played one game up forward last season and only scored 45. That’s not his go.

I have him way down on the Suns roster and I’m just not sure he’ll get much of a crack at it again in 2021.

Unfortunately, he seems to do a lot of things wrong and staying at Gold Coast was probably not best for his career.

You could hold and hope he gets to a new club next year but for me I think that option is not the smart one. Let him go.

Will be a handy pickup in the VFL Fantasy Draft. Next

He put up some reasonable scores in Fantasy too for a small forward, averaging 49 (61 BCV).

His top score was 72 (90 BCV) which came in his second game against Sydney.

There is no doubt Rankine is going to be a star but will he be a fantasy star? I’m going to go with no.

While he does have the skills to run through the midfield one day, he’s way too valuable up forward for the Suns and their midfield actually runs pretty deep.

If you can find a way to stash him on your list for a couple years, you might be rewarded if he can find his way into the midfield.

As a developing small forward though, it’s kind of hard to recommend keeping him in most keeper leagues. Quality is high but quantity is low.

Supercoach is his go for now.

Powell is a Sun who I think is really flying under the radar and 2021 is the perfect time to pounce.

He’s a speedster who can play in defence or on the wing and has a nice little fantasy element to his game.

His scores since then have varied due to his role in the side but he has had some impressive games last year with that run and dash.

His best score last year was a 105BCV points game against the Pies where he picked up 22 touches, 6 marks and a couple tackles.

He keeps the defender status this season and is a guy with plenty of potential that you will be able to get on cheap.

Still might have some mixed results but I think there is something there worth having a crack at.

The Rat could be an absolute bargain for the researched coaches.

Atkins was injured and well and truly had checked out of Hotel Crowifornia early in the season and hence never got to improve on his poor start to the season.

The Suns have obviously recruited him for a reason and he should provide some real drive and leadership off the half back flank or wing that Harbrow and Hanley formerly gave.

I can’t see any reason why he can’t hit his regular 80ish average at the Suns.

I also genuinely think some people could get him for a steal, especially those in a start up league.

He’s only 26, good job security and plenty of upside. Do your research!