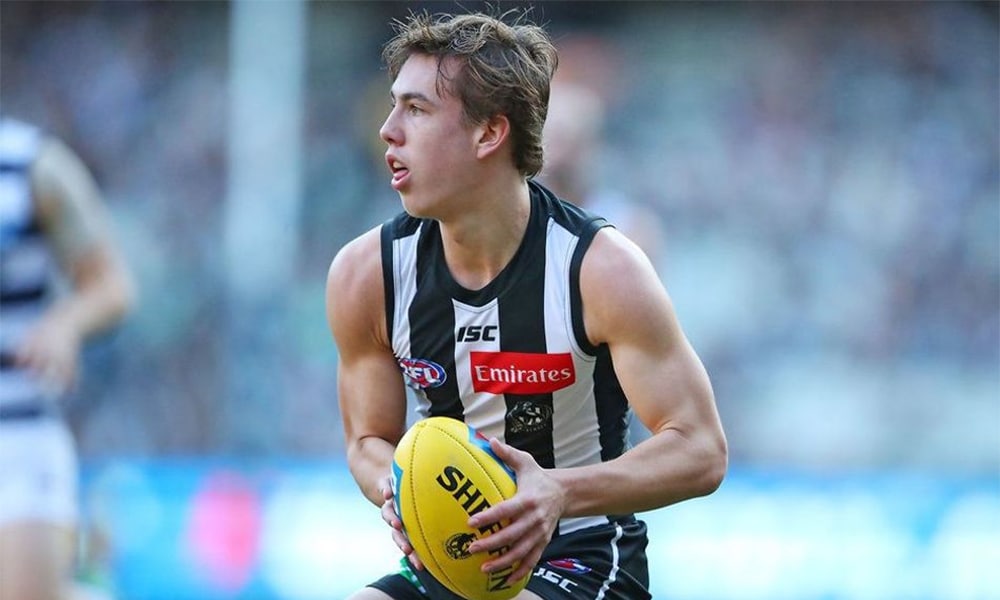 We are onto another week of team analyses, and in this article, we’re going to take a look at the Collingwood Football Club. Below we have identified six players we think are worth a look in your keeper league drafts.

Tom Langdon is a great defender who was cruelled by injury last season.

In 2019, he played 9 games for an average in 65. Unfortunately, due to a knee issue, he went into surgery mid-season and finished up his campaign early. Since then, he’s been managed throughout the preseason and seems unlikely to play early.

Due to his low average and injury concerns, he may find himself in some draft pools in 2020. He’s only 25 years of age, with his best footy ahead of him and has been a consistent fantasy scorer in the past.

If he’s available in your league, you should consider grabbing him.

Brown is one of The Keeper League’s darlings – we’re big fans of this guy!

In 2019, he played 20 games for an average of 65 AFL Fantasy points per game. A 65 average is a tad underwhelming, but if you’ve watched him play, you’ll know why we love him so much.

The kid looks like a baller. He makes himself dangerous and does some absolutely freakish things that make him look like he could be one of the next stars of the competition.

His average was the result of playing the majority of the year up forward, but when given opportunities, he proved he can score. Quite often he was given stints in the midfield which attributed to some better scores.

His best performance came against Carlton in round 8 last season, where he scored 109 AFL Fantasy points, with 21 possessions, 8 tackles and 2 goals.

Looking at his VFL numbers, he only played one game but showed what he is capable of, having 24 possessions 7 tackles and a goal for 101 points.

Named as a forward for the 2020 season, he is a great option with plenty of future potential.

This guy probably won’t be mentioned in too many other AFL Fantasy podcasts, but we like to scrape the bottom of the barrel here at The Keeper League.

While he’s not one of the sexiest options, he’s definitely consistent.

Mihocek averaged 73 AFL Fantasy points from his 22 games last season and notched up four scores of 100+.

He kicked 36 goals for the Magpies last season and we reckon he’ll be a key player for them in 2020.

Like all key forwards, he does have his quiet games, but he did have 9 games of 80+ scoring last year, which is exactly what you need for your fourth or fifth forward option in fantasy. He also has the ability to go big on his day.

Picked up as a mature age player, Mihocek is now in his 3rd season in the AFL system and looks to be improving each year.

He is a player that not many other coaches will look at but is a safe, best 22 option who will play every week. This makes him a solid option for keeper league teams.

He is an excellent streaming option for 2020, but could also become a reliable weekly proposition if he continues to develop.

In 2019 he averaged 77 from 24 games. These numbers are promising, but if you dig a little deeper, things start to look pretty good for Brayden Maynard.

In terms of consistency, Maynard is one of the best around. He went 12 games in a row last season where he scored 70 points or more.

He is a great user of the ball, and Collingwood seems to want the ball in his hands as much as possible.

Brayden Maynard is a huge breakout chance for 2020 and should be snapped up if he is available in your league.

John Noble only played 5 games last season due to being joining Collingwood in the mid-season draft.

But in three of those five games, he scored 70 or more points.

His average including finals last season was 67 and if you take out the finals performances it was 68.

His top score last season was 77 against Essendon in round 23, but I think his best performance from a pure football perspective was in the qualifying final against Geelong. The guy looked like he could play.

What I liked about Noble is he seemed to command the footy and looked comfortable in his half-back role, despite being new to the club and the AFL system in general.

My only concern is that he might not be in Collingwood’s best 22 with a fully fit squad. This is something to monitor over the preseason.

If he can lock down a spot in the side, he has plenty of potential going forward.

He was one of the biggest breakout contenders going into 2019, but injury and form issues kept him out of a large portion of the season.

Initially, Dayne Beams had an impact on his selection and held him out of the side early.

But if you did a little bit of extra research, you’d notice there were plenty of concerns.

It begs the question of whether the warning signs were there for 2019 and we all missed them.

Looking at his style of play, he is a contested ball winner which doesn’t always bode well for fantasy scoring. He also seems to favour the handball, which also isn’t the best for fantasy.

It looks as if Dayne Beams might miss a bit of the 2020 season, so lots of listeners are asking the question about Sier. But Sier and Beams didn’t play a single game together last season and Sier still couldn’t manage decent fantasy numbers.

His best bet for improving his output would be Scott Pendlebury moving out of the midfield, but we can’t see that happening.

Sier is definitely worth a punt in 2020, but there are some serious warning signs that he might not become the fantasy scorer we thought he would be.