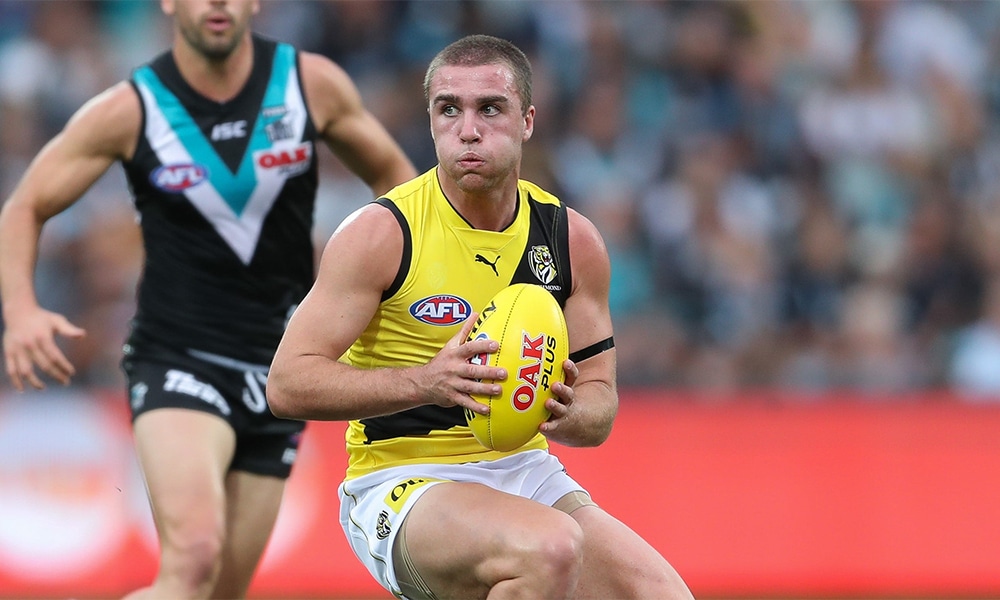 The 2019 Premiers have plenty of talent on their list and a more than a few youngsters who look like fantastic fantasy propositions.

We had Short pegged as a big breakout candidate last year but unfortunately injuries derailed his 2019 season.

Short averaged 70.4 which included an injury affected game of 3 in there but if you take that out averaged a respectable 76.

His season never really got going, getting injured in Round 3 and missing 10 games.

Once he got back into the swing of things he finished off the season well averaging 73 from his final 10 games of the season.

His consistency was pretty good with 8/12 regular season games he scored above 70 and notched up a top score of 106 in Round 19 vs Collingwood.

Short is the perfect fantasy defender because he’s horrible at defending.

Attack is his game which is awesome as Richmond want the ball in his hands coming out of defence.

He will definitely shine when Houli retires but with Brandon Ellis now gone he could easily step up his game this season and become the player we thought he’d be in 2019.

Ross started like a house on fire scoring 86, 63 and 92 from his first three games.

After that hot start he tapered off a bit and then got injured.

He averaged 62 last year but did include an injury affected score of 11. If you take that out and it gives you 71 average which is great for a first year player.

Ross had 20+ disposals in 3/7 games and interestingly, Richmond won clearances 48% of the time with him in at the centre bounces, which is the best of any Tigers player.

His kicking lets him down a touch which which might hurt his selection chances but he’s still young and has plenty of talent.

Should be a good scorer when he gets his chance to play.

We all know the feel good Grand Final story about Pickett but when it comes to fantasy be weary of this one.

Pickett played the one game last season, in the Grand Final where he scored 73.

While that’s a mighty fine score in your debut game and in a Grand Final, historically he’s never been a massive ball winner.

Champion Data have covered 123 matches featuring Pickett and through his career he only averaged 17 touches per game.

The other major factor that hurts Pickett’s ‘draftability’ is that he is 28 years old.

For those playing Super Coach he’s probably going to be a good pick up as a quality over quantity player, likewise in he’ll be a good money maker in Fantasy Classic.

But as a draft and especially a keeper league prospect, he’s one we need to cool our jets on a bit.

Week to week Bolton is a hard player to field as his scoring ability is very role dependent. There is no doubt he has plenty of talent though.

Bolton started the year in the VFL and played 4 games for a 114 point average.

He then cemented his spot in the Tigers Best 22 but his scores varied from 26 to 116 points.

Midfield Shai is a great fantasy prospect. He racks up touches with ease, tackles well and finds the goals.

It’s when he plays the pressure forward role that it’s bad news for fantasy coaches.

Drafting him is a real head scratcher. He has stacks of potential as a midfielder but the Tigers depth in that area runs so deep.

Yes there is plenty of upside but when will coaches feel confident to play him week in week out?

Late flyer for me.

Vlastuin was a Tiger who benefited from the Alex Rance injury in 2019 and should continue to benefit after his retirement.

Vlastuin had a PB season in 2019 averaging 79ppg which was 6 points higher than his 2018 numbers.

He was outstanding in the Tigers defence last year with his intercept marking being a real highlight.

Vlastuin notched up 5 tonnes last year which included a 124 point PB and a 106 in the AFL Grand Final.

Vlastuin has gone from a handy backup depth option to a fantastic D2-4 with the added responsibility and confidence he’s playing with.

Post bye last year he averaged 80 and was incredibly consistent with a low score of 55 and only two other games under 70.

He now reminds me a lot of Michael Hurley in his fantasy prime and is really a must keep due to his consistency and role.

I can see him comfortably push to a low 80’s average in 2020 and at 25 years of age is a great no fuss defender option going forward.

It was impossible not to be impressed by Sydney Stack last year.

He dominated his first year of footy after being a pre-season pickup and averaged 72.

I always felt he was older but the kid is only 19 and has talent to burn.

Unfortunately for him a late season injury ruined a chance at a flag in his debut season.

Stack scored a lovely 89 points in his debut game against GWS with 17 touches and 8 marks.

He also had 11/17 games over 70 points which is amazing consistency for a first year player.

I like that he does it all. He can accumulate touches, mark, tackle and has great speed and versatility.

With a proper preseason under his belt in 2020, I reckon he’s only going to keep getting better and better.

Whether he lines up on a wing or a back flank as a defender option in 2020 I think he’s one you want in your side and you’ll want him there for the next 10 years.